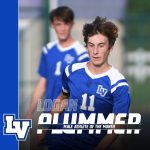 LAKEVILLE, IN. – The Hoosier North Athletic Conference has released the 2020 fall Academic All-Conference list A total of 24 LaVille student-athletes were selected. To qualify, a student must be a current Junior or Senior, have a GPA of 3.5 or higher and be ranked in the top 25% of their class.  At LaVille, the

LAKEVILLE, IN. – The Indiana High School Athletic Association state boys soccer tournament continues Wednesday, October 7, at Newton Park. The semifinal round will feature one match between #14 Morgan Township (11-4) and #20 Washington Township (10-4-2) hosted by LaVille High School. The second semifinal match scheduled between Oregon-Davis and Marquette Catholic will not be

LAKEVILLE, IN. – The LaVille boys soccer team may have been short on depth, but not heart. The Lancers, who played several matches this season without a full squad due to injuries, gave Morgan Township all it wanted before the Cherokees eked out a 2-1 victory over LHS in the first round of the Class

LAKEVILLE, IN. – The 27th annual Indiana High School Athletic Association state soccer tournament is set to kick on Monday, October 5. LaVille High School will be the host school at the Class 1A Sectional #34 event to be held at Newton Park. The host Lancers (2-6) are first out of the gate and

LAKEVILLE, IN. – The pairings for the 27th Annual IHSAA Boys Soccer State Tournaments were drawn recently.  There are 299 boys teams set for competition next week. A total of 16 sectionals in each of three class will run October 5 through October 10. Regionals will be played Saturday, Oct. 17, Semi States are Saturday,

INDIANAPOLIS, IN. -The pairings for the 27th Annual IHSAA Boys and Girls Soccer State Tournaments were drawn and announced with 299 boys teams and 266 girls teams set for competition next week. Both tournaments mirror each other beginning with 16 sectionals in each of three classes running Oct. 5- 10. Regionals will be played Saturday,