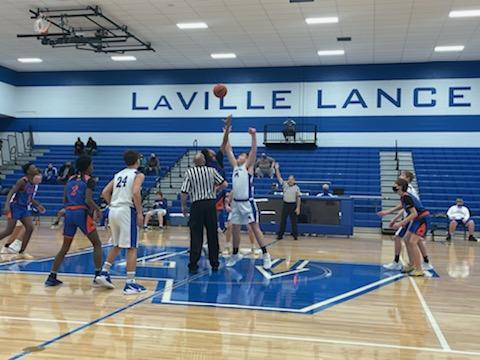 The eighth grade basketball team played host to South Bend Career Academy in a non-conference game.
LaVille hit two big shots and played solid defense for the final 20 seconds of the game to pick up a hard-earned 34-33 victory over the Trailblazers.
Career Academy and LaVille battled for three quarters when LaVille’s Avery Garrett drained a crucial 3-pointer at the buzzer to close the third quarter. Garrett’s shot gave the Lancers a 28-19 lead heading into the final period.
Career Academy hit a couple of big shots in the fourth quarter and took a 33-32 lead before Xzavian LaFave hit a short jumper with 20 seconds remaining to give LaVille a 34-33 lead and played good defense to come up with the exciting victory.
“This was overall the toughest game we’ve faced as a team so far this season,” said LaVille coach Austin Brooks. “It came down to the wire at the end. We knew it was going to be a dog fight the whole game. We haven’t faced a more talented team than SBCA, but our team fought through the challenges, and came out winners. I couldn’t be more proud of what they have accomplished this month. 9-0 in one month, that is crazy.”
LaVille Collin Czarnecki led a balanced offensive attack with 14 points. LaFave added 12 points and Cody Allen chipped in with seven points.
The Lancers also did a solid job hitting the boards. Allen led the way with nine boards. Czarnecki had six rebounds, and LaFave five. Defense was also a contributing factor for LaVille. LaFave led the way with five steals and Czarnecki had four.
LaVille improved to 9-0 overall and will take time off for Christmas Break.
The Lancers return to action on January 6 against St. Michael’s Catholic School of Plymouth at Dale E. Cox Gymnasium. The seventh grade is scheduled to start at 5 p.m., followed by the eighth grade game.