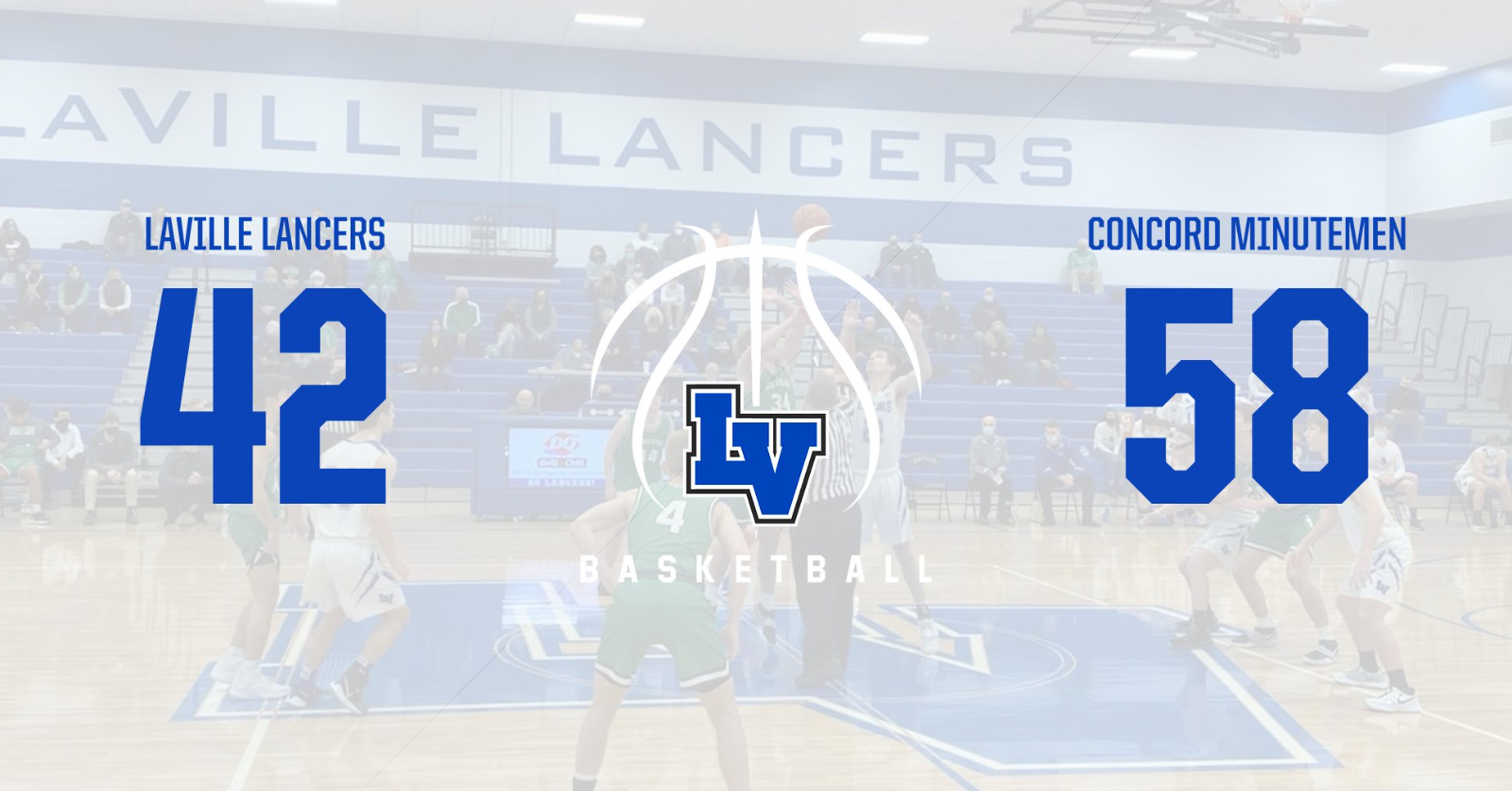 LAKEVILLE, IN. – It had been since 1993-94 since Concord visited Dale E. Cox Gymnasium on the campus of LaVille High School for a basketball game.

Back then, the Jim Hahn led Minutemen came away with an 85-64 victory with a team that featured seven seniors and led by senior guard Tyler Davis.

This time around, Concord is led by a Derrick DeShone team that is fighting to bring this Minutemen team back to .500.  CHS came in with some size and athleticism to challenge LaVille.

LaVille, fresh off a run at its fourth Hoosier North Athletic Conference title, is on the back end of a doubleheader weekend. 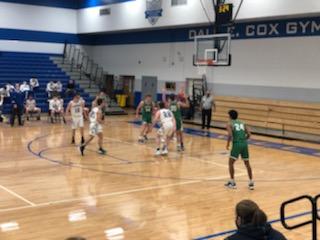 Concord was able to utilize the height, length and a little more quickness to come away with a 58-42 victory over the Lancers.

The duo of Payton Fish and Zaven Koltookian proved tough for the Lancer defense for much of the contest.  Fish, the 6-foot-6 senior, along with Koltookian, the 6-foot-5 junior, combined for 34 points.

“The strength and size of their interior play was the biggest difference,” said LaVille head coach Michael Edison.  “We did a pretty good job on their guards out front, but their big men down low were just a little too much for us.

Koltookian got the guests on the board first before LaVille’s Andrew Dill etched his name on the score sheet to tie the game at 2-2 just a couple minutes into the contest.

Fish was huge over the next three possessions as the Minutemen extended its lead to 8-2 at the 3:44 mark.

The Lancers, however, were energized by seniors Bobby Good, Leyton Czarnecki, and Dill to take a 14-11 lead.  Good, coming off a solid 25-point effort Friday at Caston, continued where he left off in helping Lancer basketball complete at least a share of the 2020-21 HNAC championship.

“They had pretty good ball pressure,” said LaVille coach Michael Edison.  “But we had a lot of stretches where we had good looks and just didn’t convert on open shots. 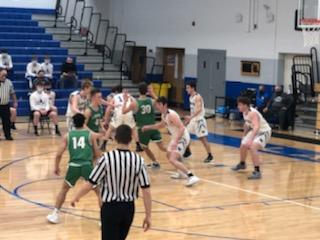 “That was one of the stretches during the game where we actually knocked in shots and were striking on all cylinders,’ continued Edison.  “It did not last as long as I would’ve liked for it to.”

It was Concord’s defense that pushed LaVille away from the basket with pressure on the ball, deflections, and just flat being stingy with each LHS possession.

The Minutemen defense forced LaVille into a 7-minute, 16-second dry spell that turned a 14-11 LaVille lead into 21-14 lead.  Ultimately the CHS lead hit 24-16 as Jack D’Arcy drilled a 3-point basket as the second quarter buzzer sounded.

“They did not do anything extraordinary, but rather we just did not convert on offense,” Edison said when asked about the dry spell.  “It is amazing how knocking shots down makes a team look so much different.”
Fish would finish with 10 of his game-high 18 points coming in the first half.

Koltookian took over in the second half where Fish left off in the first half, scoring the first bucket to up the ante to 28-17.

Dill, who was kept at bay offensively Friday at Caston, was a spark for the LaVille offense hitting several big buckets, including four 3-pointers, as Concord closed the third quarter with a 41-28 lead. 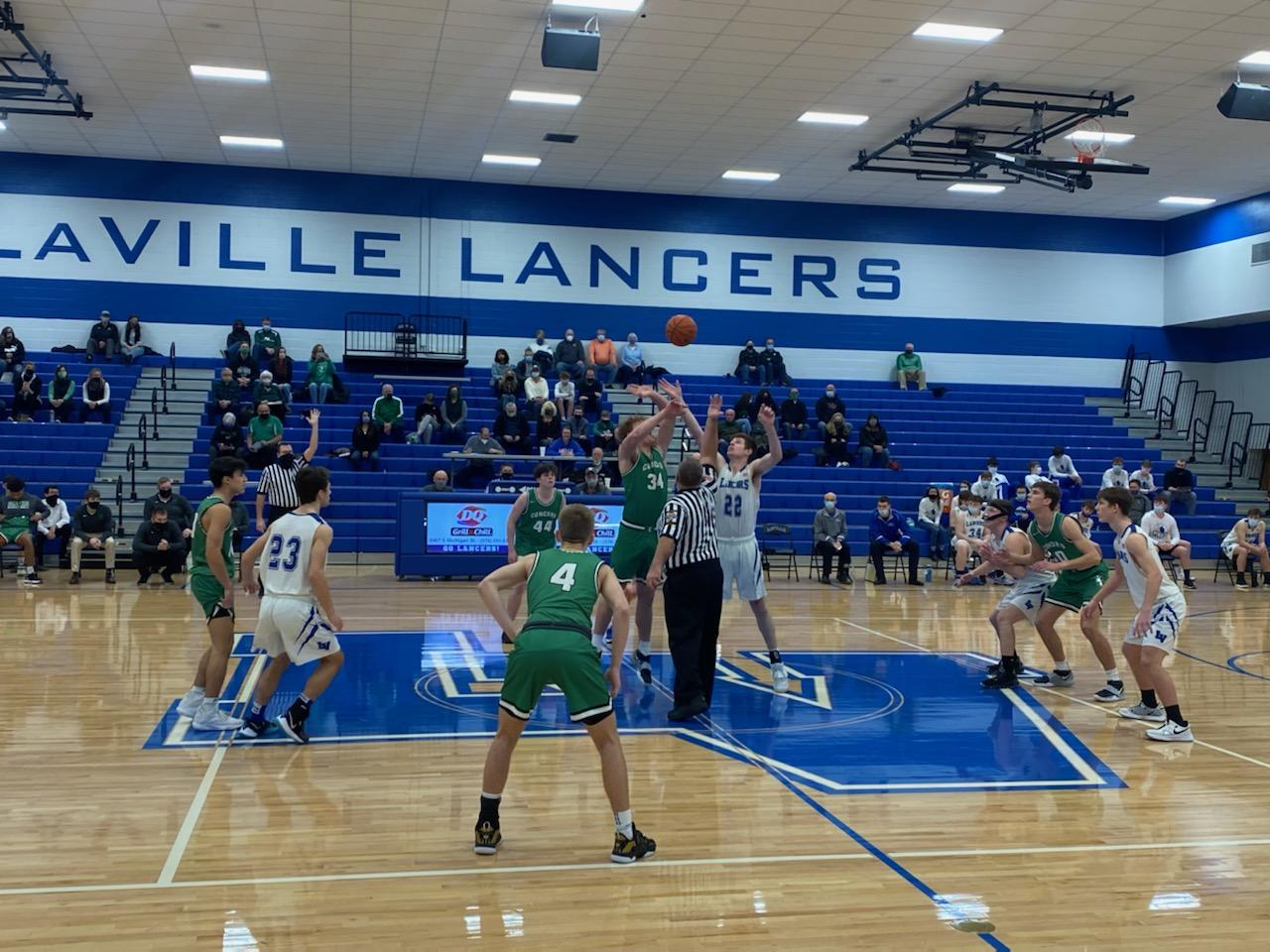 “We tend to have a better chance if Leyton, Andrew, and Bobby all have fairly good games,” said Edison.  “Andrew is a great shooter and it was nice to see him get going a little bit against Concord. We will definitely need him going down the stretch in order to make a good tournament run.”

In the final quarter, just when LaVille would put together a couple possession scoring streak, Koltookian was there for an easy basket or offensive put back.  Koltookian finished with 12 of his 16 points in the second half.

One other aspect that LaVille was not counting on was a fine 12-point performance by Amarion Moore.

Concord runs much of the same offense that LaVille runs so the difference was ultimately execution. 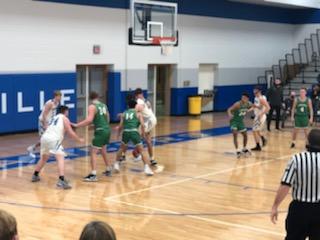 “The conversion on easy baskets was a big key,” said Edison. “Interior play was another, and our execution on offense throughout much of the game was very poor.

“Leyton did a nice job on D’Arcy, containing him and doing his best to keep him from going nuts on us offensively,” concluded Edison.  “We just could not contain Koltookian or Fish.”
LaVille moves to 12-8 overall and will close the 2020-21 regular season at Dale E. Cox Gymnasium on Tuesday, February 23.

Concord evens its record at 9-9 overall and will finish its season Feb. 23 against John Glenn and Feb. 26 with Westview.  Both games will be at McCuen Gym.