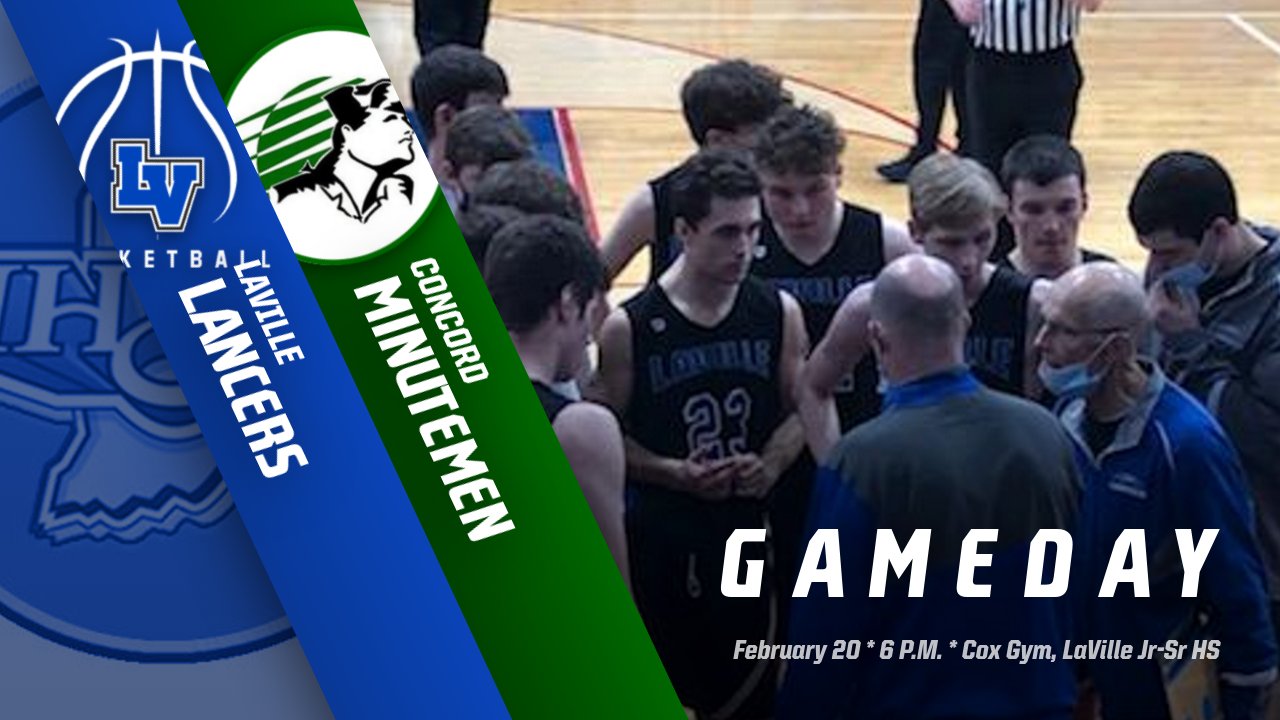 After coming off a hard-fought 54-45 Hoosier North Athletic Conference victory at Caston Friday night that guaranteed LaVille at least a share of the 2020-21 HNAC championship, Lancer Basketball returns home.

Concord leads the all-time series with LaVille 21-9.  The last Lancer home victory over the Minutemen was a 54-50 decision during the 1985-86 season.  Concord would go on to finish 20-6 overall, win the NLC with a 7-0 record and advance to the IHSAA Fort Wayne Semi-State.  In fact, the Minutemen would avenge the regular season loss to LaVille with a 49-45 victory in the semifinals of the IHSAA Elkhart Regional played at North Side Gym in Elkhart.  Jim Hahn was the coach of the Minutemen, while the Lancers were coached by Larry Radecki and finished the 1985-86 season with a 18-7 mark, including 5-1 in the Northern State Conference.  LHS won three games at the Plymouth Sectional in 85-86, including a 60-59 upset victory over the host Pilgrims.

“Concord has been playing extremely well lately,” said Edison.  “They have some good size and have a couple of really good cards. These players have been playing under Derrick DeShone last year and this year and have continued to get better and better!”

Under DeShone, the Minutemen’s defense continues to improve in defensive average, allowing 49.9 points per game, which is the best defensive average CHS has had since the 2012-13 season when they allowed 44.1 ppg.

“Coach DeShone likes to be patient on offense and very stingy on defense!” said Edison.  “I think they are the most improved team that we are going to play all year long from the beginning of the year to where they are now.  It will be a very big test for us after coming off a big win against a conference opponent tonight.”

Friday night, Bobby Good and Leyton Czarnecki hit for 25 and 20 points, respectively, to lead LaVille past Caston and force a share of the conference crown.
“We would not have won tonight if Bobby would not have played as well as he did on the offensive end tonight,” said Edison.  “He also had some really big rebounds for us. That is how I expect Bobby to play every night because I know he is very capable!  I am very happy for him because he has worked so hard all season just like all of the players have!

“What a neat and well deserving accomplishment for the four seniors on the team!” Edison said of the conference championship.  “I am very proud of the way they have battled all year long.”

According to Edison, Concord brings a solid inside-out game to the floor.

“Concord has some very good guard play in Jack D’Arcy, Gavin Smith, and Andres Dixon.  Smith is an excellent three point shooter and Jack D’Arcy runs the point for them.  Dixon is a feisty little guard.  Payton Fish and Zaven Koltookian Are very big boys down low for them. They are extremely strong and can rebound and have really good interior play.

The Minutemen are coming off a 58-49 victory at South Bend Clay on February 16.  Koltookian led the Concord offense with 15 points, while Fish added 14.  D’Arcy and Smith added nine points each to the balanced attack, while Dixson chipped in with eight.

Concord overcame a slow start, trailing 12-7 at the end of the first quarter, before pulling away for the victory.  CHS finished 12-of-16 from the free throw line.  The Minutemen also made good use of the deep ball, connecting for eight 3-pointers.  D’Arcy led the way with three triples, while Dixon and Smith added two each.

According to Edison, “patients on offense, rebounding, and taking care of the ball,” are keys to a Lancer victory over the Minutemen.

LIVE STREAM: If you can not attend the game in person, the Triton at LaVille Basketball game can be seen via the NFHS.org site by clicking on: https://www.nfhsnetwork.com/schools/laville-high-school-lakeville-in

TICKET INFORMATION:  For parents attending events, tickets for the the game can be purchased at https://lavilleathletics.com/teams/events/24541333/tickets. Parents must have the pass code that was sent to you by the athletic office.  All tickets must be purchased online prior to the event, and they will be emailed to your smartphone. If you don’t have a smartphone or wish to have a hard copy of your ticket, feel free to print them out and bring the physical ticket with you to be scanned at the gate. TICKETS WILL NOT BE SOLD AT THE GATE.  We encourage you to wait until the day of the game to purchase your tickets in case events get cancelled. This will prevent having to deal with refunds as much as possible.
SPECTATOR INFORMATION:  Each participant is allowed 4 (four) tickets for their families.
Families should sit physically distant from others and wear masks at all times. There are no pass outs.
When attending events at LaVille Jr.-Sr. High School, Patrons can park in the West lot and enter through door ‘F’. In order to limit the contact between communities, visiting fans should enter the Southernmost door marked ‘visitors entrance’ and sit in the South bleachers. Home fans should enter the Northernmost door marked ‘home entrance’ and sit in the North set of bleachers. We also ask that visiting fans use restrooms located out the Southeast doors of the gym while home fans use the facilities located out the Northwest doors of the gym.
Masks are required at all times, if you refuse to wear your mask, you will be asked to leave. No concessions will be sold at this time, so taking your mask off to eat or drink should not be a problem.

Physical Distancing is also required at all times. Please sit with your household and stay at least 6 feet away from others at all times. For reference, we have spaced out ‘LV’s on both the home and away bleachers. Please sit on an ‘LV’ when you are looking for a spot.

At the conclusion of the event, fans are to leave the facilities promptly. There should be no gathering to talk with others or waiting for the athletes to come out of the locker rooms. If you are waiting for an athlete, you can wait for them in your vehicles.

In order to give our athletes the best possible chance to compete this season and complete it in its entirety, we ALL must follow these guidelines to the best of our ability. Failing to do so can only hurt their chances of having a complete season.

These policies have been put into place for the safety and well being of everyone involved – players, coaches, officials, event workers, parents and fans.  Please help us stay safe by being a part of the solution!

WEB: High school and Jr. High games at LaVille will be live-streamed at one of the two links below:
JV: https://www.nfhsnetwork.com/events/laville-high-school-lakeville-in/gamb00aeec776
Varsity: https://www.nfhsnetwork.com/events/laville-high-school-lakeville-in/gambe86425436
for anyone that cannot attend the event and wishes to watch. There is a monthly subscription fee for this service that can be cancelled at any time.
NOTING: The Lancers – are 12-7 overall and 6-1 in Hoosier North Athletic Conference play – are coming off a 54-45 victory at Caston on February 19 – clinched at least a share of the 2020-21 HNAC Championship with the victory at the Comet Crater on February 19 – have won or shared the last four HNAC titles under Michael Edison –were led in scoring by Bobby Good with 25 points and nine rebounds, while Leyton Czarnecki added 20 points and five assists against Caston –  are led in scoring by Leyton Czarnecki with 15.9 points per game – get 12.8 ppg from Andrew Dill – get 12.2 ppg and 6.2 rebounds per game from Bobby Good – have 10 straight winning seasons under Michael Edison – are 102-39 in games played at Dale E. Cox Gymnasium under Michael Edison – are 1-0 against Concord under Michael Edison – are 8-2 in games played at Dale E. Cox Gymnasium under Michael Edison – shoot 35% from 3-point range – play two Class 4A schools on their 2020-21 schedule, including Goshen and Concord – are 5-8 all-time in games played against Concord at Dale E. Cox Gymnasium . . .
The Minutemen – are coming off a 58-49 victory at South Bend Clay on February 16 –  Zaven Koltookian led the Concord offense with 15 points, while Payton Fish added 14 against South Bend Clay – had Jack D’Arcy and Gavin Smith add nine points each against South Bend Clay – had Andres Dixson chip in with eight points against South Bend Clay – overcame a slow start, trailing 12-7 at the end of the first quarter, before pulling away for the victory – finished 12-of-16 from the free throw line against South Bend Clay. – made good use of the deep ball, connecting for eight 3-pointers.  D’Arcy led the way with three triples, while Dixon and Smith added two each against South Bend Clay – play three Class 2A schools on their 2020-21 schedule, including Prairie Heights, Westview, and the Lancers – are 8-9 overall and 4-3 in the Northern Lakes Conference – are 5-3 in games played on the road in 2020-21 – are 0-1 in games played against LaVille under Derrick DeShone – are 8-21 in game played on the road under Derrick DeShone . . .
QUOTING: “Concord has some very good guard play in Jack D’Arcy, Gavin Smith, and Andres Dixon.  Smith is an excellent three point shooter and Jack D’Arcy runs the point for them.  Dixon is a feisty little guard.  Payton Fish and Zaven Koltookian Are very big boys down low for them. They are extremely strong and can rebound and have really good interior play.”
– Michael Edison on Concord
Mar
06