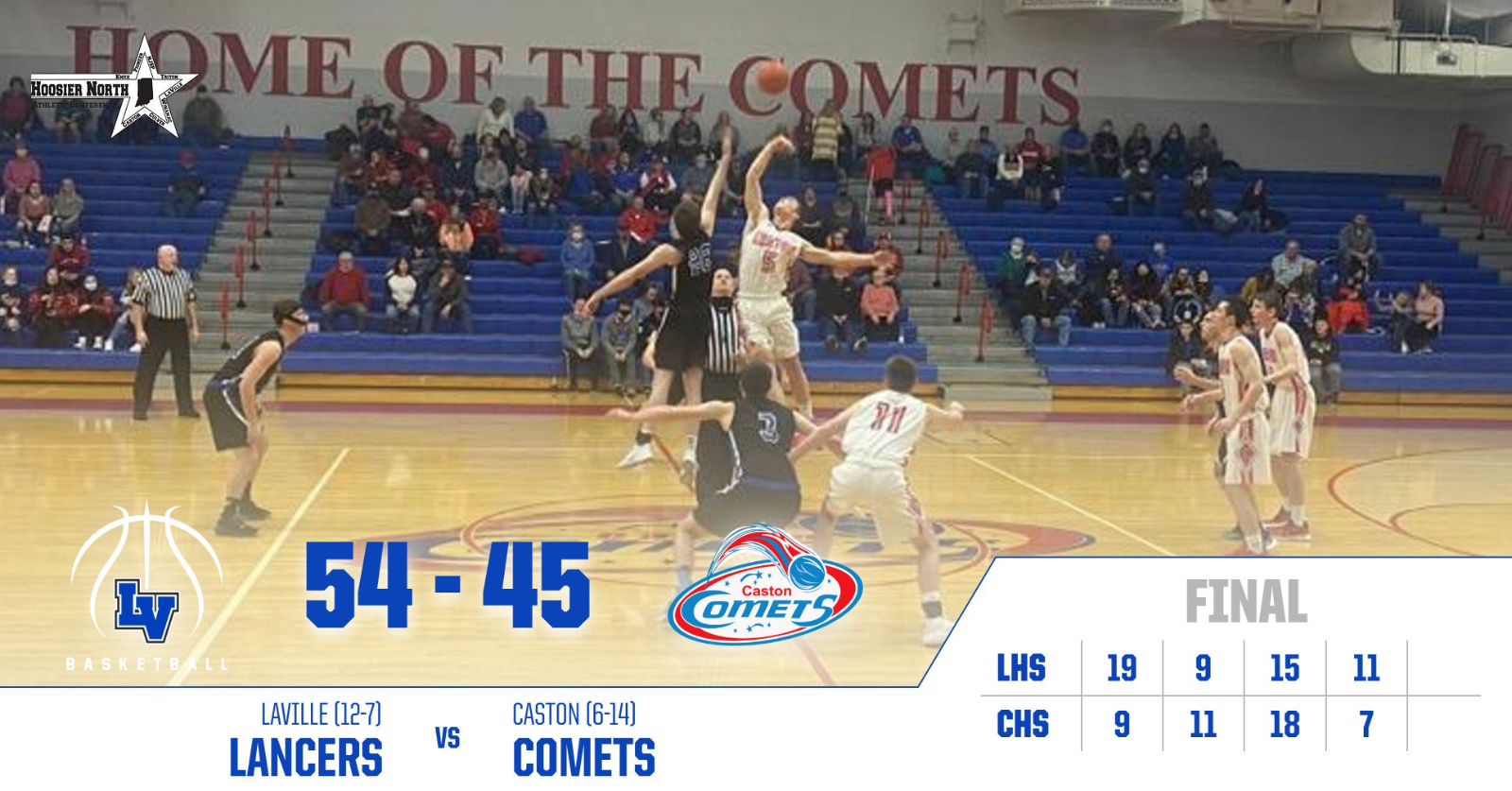 FULTON, IN. – Crucial shots, stingy defense, and big-time play from a couple senior leaders played a role in Friday’s Hoosier North Athletic Conference battle between LaVille and Caston in high school basketball at the Comet Crater.
Senior Bobby Good came up with some big shots early to put the Lancers on top, and hit a couple big 3-pointers in the third quarter when a pair of his teammates were on the bench with foul trouble as the Lancers held off a valiant rally from Caston to earn a 54-45 victory and capture at least a tie for the 2020-21 HNAC title.
It is the fourth straight conference title – outright or shared – in the last four years for head coach Michael Edison’s Lancer squad.
Caston got on the board first with a pair of free throws, but it was Good who scored on three of the next four LaVille possessions to give them a lead they would never relinquish.  Although it was threatened a handful of times in the second half. 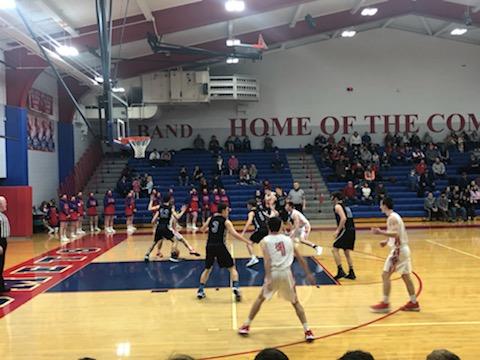 “We would not have won tonight if Bobby would not have played as well as he did on the offensive end tonight,” Edison said of Good’s 25 point contribution.  “He also had some really big rebounds for us. That is how I expect Bobby to play every night because I know he is very capable!  I am very happy for him because he has worked so hard all season just like all of the players have!”
With that victory, LaVille finished 6-1 in the HNAC.  Going into Friday’s play, LaVille, Knox, and Triton were all tied for the conference lead.  Triton and Knox still have to play each other on February 26 at Knox.
“What a neat and well deserving accomplishment for the four seniors on the team!” Edison said of the conference championship.  “I am very proud of the way they have battled all year long.”
Behind an eight-point quarter from Good and classmate Leyton Czarnecki, LaVille took a 19-9 lead at the end of one quarter. 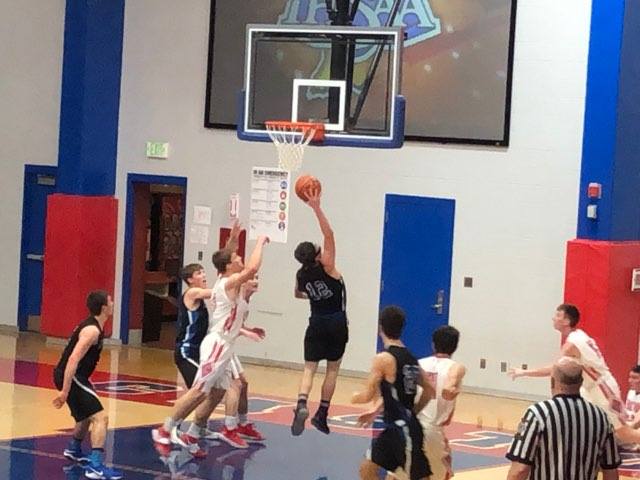 Caston cut into the LHS lead, outscoring the Lakeville guests 8-2 to open the second quarter. However, behind the scoring of Good and Czarnecki LaVille upped the ante to 28-17 late in the second quarter.  Kade Zeider gave Caston a boost by drilling a big 3-point bomb just as the first half horn sounded to narrow the Lancer lead to 28-20 at halftime.
The LaVille lead hit double figures at 30-20 when Ayden Doyle swished a pair of free throws to start the third quarter, but Caston began to peck away.  Four different players hit the Comet score sheet to cut the lead to 34-31 when Zeider canned a triple with 2:43 left in the third.
But Good would convert the next three chances for LaVille to open the lead back up to seven points.  All this with teammates Andrew Dill and Czarnecki in foul trouble and sitting a spell on the bench.  Joey Spin closed the third stanza with a big bucket at the buzzer and Caston hung close at 43-38.
The two clubs would go back and forth between a four and five-point game when LaVille went cold from the free throw line. Caston was trying to make a run. fouling in hopes of getting LaVille to miss the front end of the bonus.  And that, the Lancers did.  Czarnecki, Dill, and Good missed key free throws to widen the gap.  The Lancer defense, however, was stingy, not allowing Caston a point for over three minutes before LaVille settled down and finished the game going 7-of-8 from the line in the final 1:06. 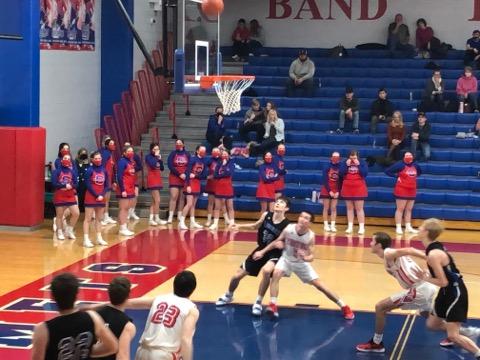 “Well, for a stretch there we were not getting it done on the defensive end,” Edison said of the Caston rally.  “Bobby had a couple of really big threes in the third quarter when I had Leyton and Andrew on the bench because they each had four fouls. Right after that we were able to get several stops in a row, either getting big rebounds or key steals.
“With about four minutes to go in the game we missed three straight shots that could’ve been potential 1+1 shots,” continued Edison.  “Three different players missed those and it made me really worried. A couple minutes after that we came back with some big free-throws, which is what you were talking about. Those were able to help seal the deal for us.”
With Dill and Czarnecki on the bench with four fouls, Edison pointed to his bench for some valuable minutes.
“We had some younger guys play some key minutes,” insisted Edison.  “Ross Wagoner, Garrett Wagoner, Alec Coleman, and Lucas Plummer all contributed tonight in a positive way.”
With the victory, LaVille improved to 12-7 overall and 6-1 in HNAC play, and will return to Cox Gymnasium Saturday to host Concord. 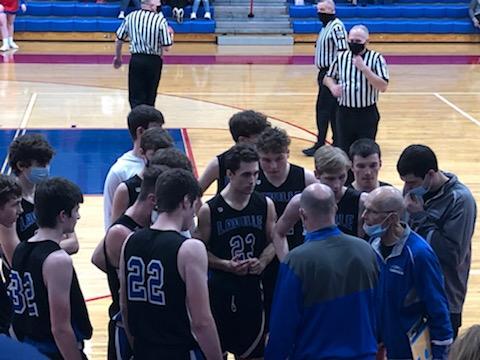