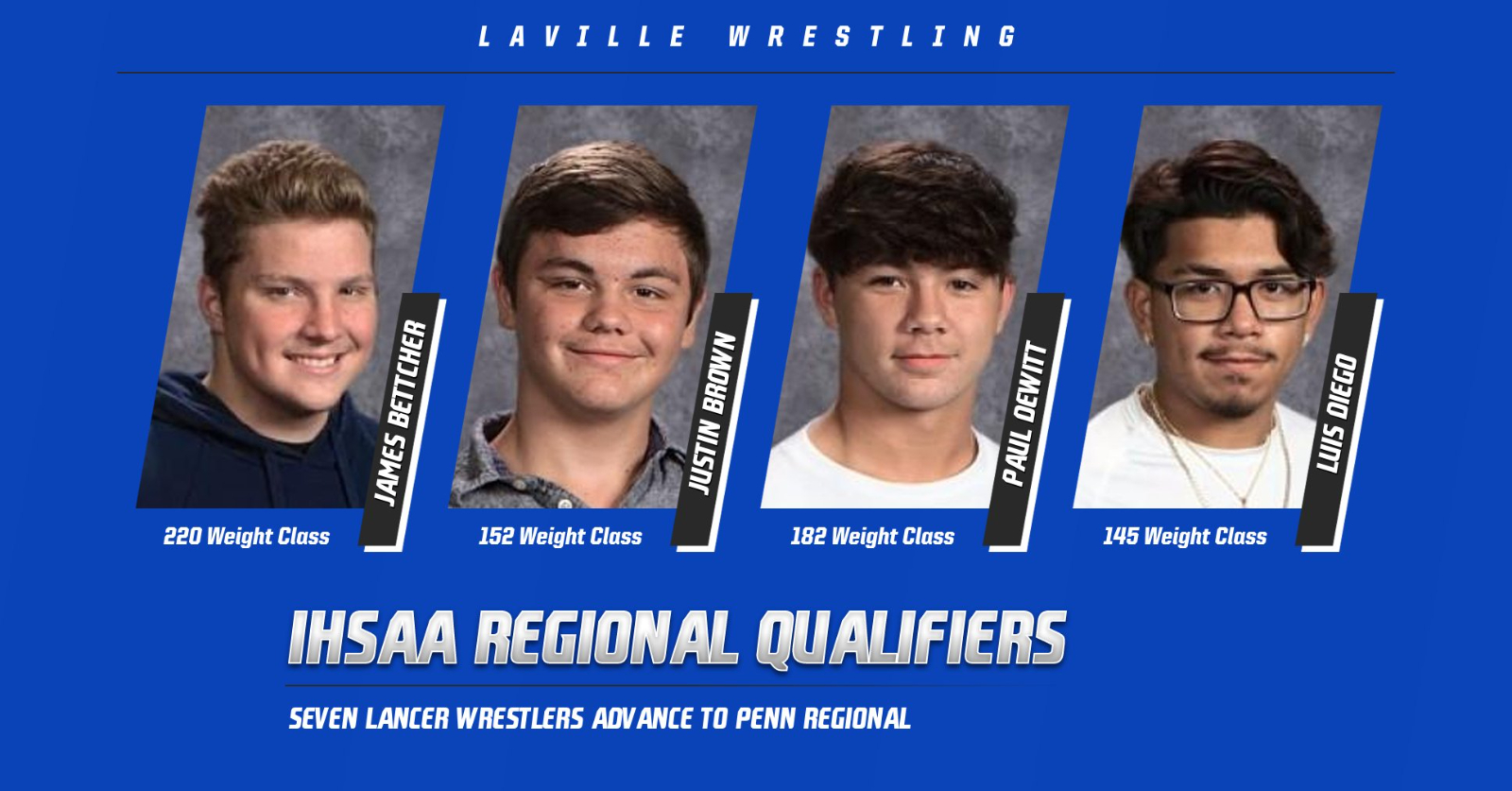 “Overall the coaching staff is pleased with how we improved this year,” said LaVille Wrestling coach Dylan Shumaker.  “We are sending one more wrestler to regionals this year after only advancing six. We also had three wrestlers make it to the finals for sectionals and we only had one make it last year. We were hoping to get our first sectional champion but we came up short in each of our matches. We have a lot of confidence in all seven wrestlers who advanced though and plan to get some hard practices in this week.”

“There are 14 weight classes, and we were only able to have nine of those weight classes participate in the sectional,” explained Shumaker.  “We nearly had our entire team make it to the regional tournament this weekend. Giving up five weight classes, we were able to place fifth overall as a team. We know having a small team makes it difficult to compete, but we are happy we are sticking with the teams that have full line-ups.”
And despite not having an entire team, the Lancer team members continue to get better each day.
“We are also happy at the improvements we made individually,” said Shumaker. “All seven wrestlers advancing are accomplishing a lot compared to last year, and we like seeing the overall improvement from last year’s tournament. We have really high expectations for next year after these results considering a majority of our team is returning. “
LaVille placed three wrestlers – Stepp, DeWitt, and Bettcher – in the sectional championship match Saturday at Plymouth High School. 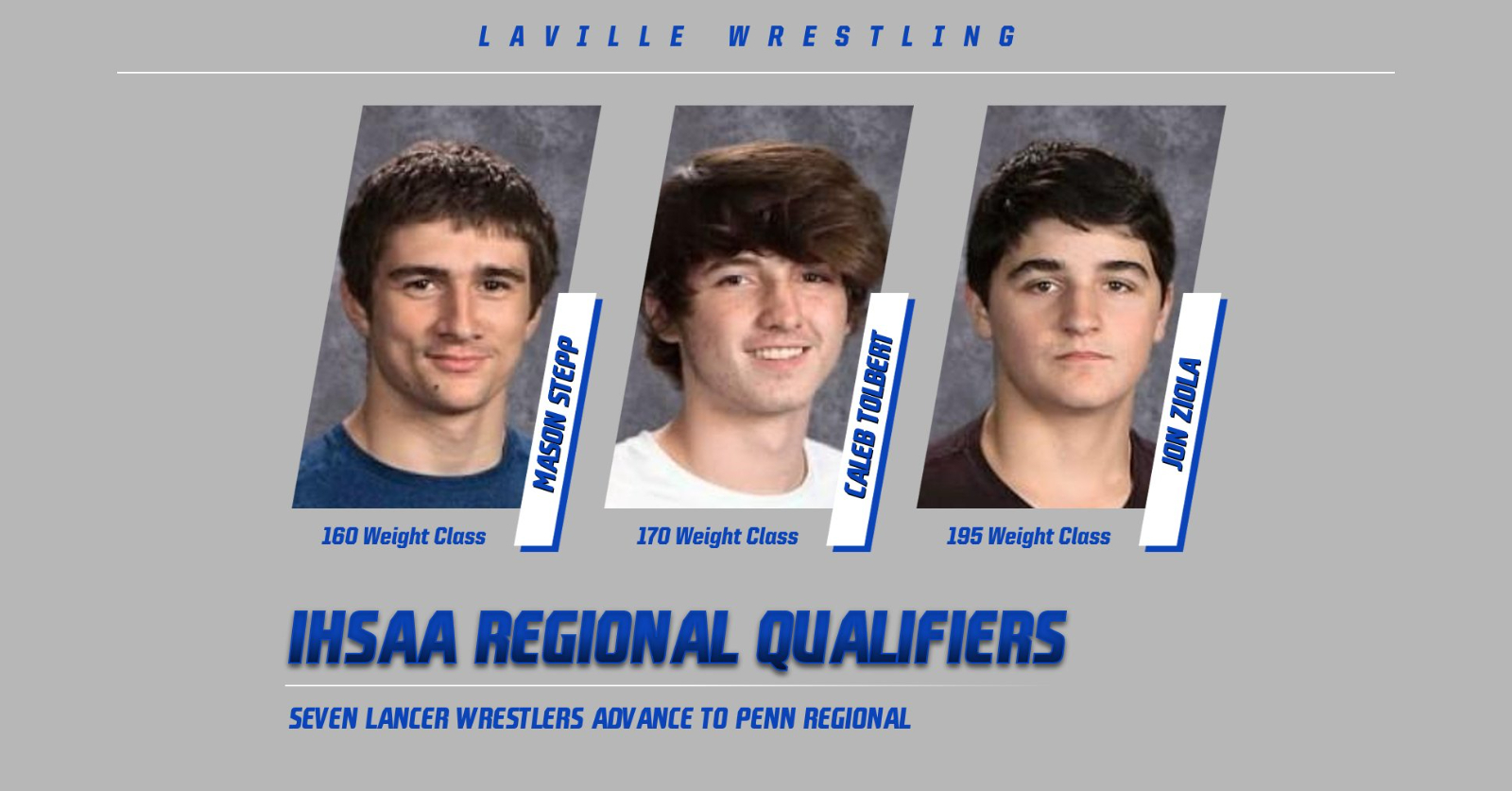 “The championship matches were tough,” said Shumaker.  “Unfortunately all three wrestlers were defeated, and for Dewitt and Bettcher it ended their undefeated seasons. We knew ahead of time though that these matches were going to be challenging for our guys. For Stepp and Dewitt, experience really held them back. Both wrestlers are sophomores and have a lot more to give to the sport. We have a lot faith that these two will come back next year to compete for a sectional championship again.
“For Bettcher, the loss meant a lot to him,” continued Shumaker.  “He is a senior and he won’t get another shot at winning sectionals. We believe in him though, and know that this weekend he can come back from this loss and make a run at winning the Regional Championship.
Shumaker is proud of his ‘Lancer Seven’ on advancing to the regional level and now it is time to sharpen up their skills and continue to build on the stamina it is going to take to advance to the next level.
“Ultimately having seven advance to the regional means a lot,” said Shumaker.  “It shows all the hard work these young men have had to put into the sport. It was a difficult year for sports in general, and we lost a lot of opportunities to compete due to restrictions with covid. The wrestlers battled hard though and came through when it mattered most. 5 of the 7 wrestlers are returning next year also. The future looks bright for these wrestlers.”
Shumaker also knows the Penn Regional competition will be stiff.
“The competition is very tough at the Penn Regional,” said Shumaker.  “We have to wrestle some very large schools that have very good wrestling programs. The wrestlers who placed fourth have a tough opening match as they have to wrestle the sectional champions from the Mishawaka Sectional. Some of the champions there are highly ranked individuals in the state and our wrestlers are going to have to wrestle their best matches if they want to move on to semi-state. For our wrestlers that finished second, they are a little more fortunate and get to wrestle the third place finishers from the Mishawaka Sectional. They still have tough matches, and moving on to semi-state won’t come easy for them either.”
According to Shumaker it will take a victory in the first match of the regional to advance to the East Chicago Semi-State level.
“In order to move on to the East Chicago Semi-State, our wrestlers have to win their first match at regionals,” Shumaker concluded.  “Winning that first match guarantees advancement. For that reason our biggest focus this week is on that first match this weekend. We have a lot of faith in our second place finishers to move on to the East Chicago Semi-State as they have favorable match-ups. We also like our match-up for Luis Diego who finished third. We would like all of our wrestlers to move on, but we know for our fourth place finishers they are going to have a difficult time wrestling the champions from the Mishawaka Sectional. We will do our best to get everyone prepared so that they are able to wrestle their best matches this weekend.”
IHSAA PENN WRESTLING REGIONAL
Hosted by Penn High School
Saturday, February 6

*No contestant shall wrestle 2 matches with less than 45 minutes rest between
such matches.
*1:00 p.m. Finals on two (2) mats – subject to change based on the pace of matches

● Admission:
– All Tickets will be $8.00. Each school will be able to bring their qualifying athletes,
alternates, coaches, and managers on the submitted list.
– Everyone should enter through Door D

● Tickets – Each wrestler will be allotted 2 tickets.  You will receive an email on Wednesday this week with all of your school’s ticket information.  Tickets will only be available to purchase online Wednesday-Friday.  Tickets are $8 per person.  Alternates, will not be allocated a ticket.  If an alternate is used on Saturday they will then be issued two tickets that can be purchased online at the gate.
● Streaming: Track Wrestling: www.trackwrestling.com will be used to broadcast the tournament live. Click “Browse” and Choose “Tournament” and then click “Search”. Type “Penn”. Select IHSAA Regional @ Penn. Click “Enter Tournament”. Under “Results” choose “Brackets” to view the brackets for each weight class.
Mar
06