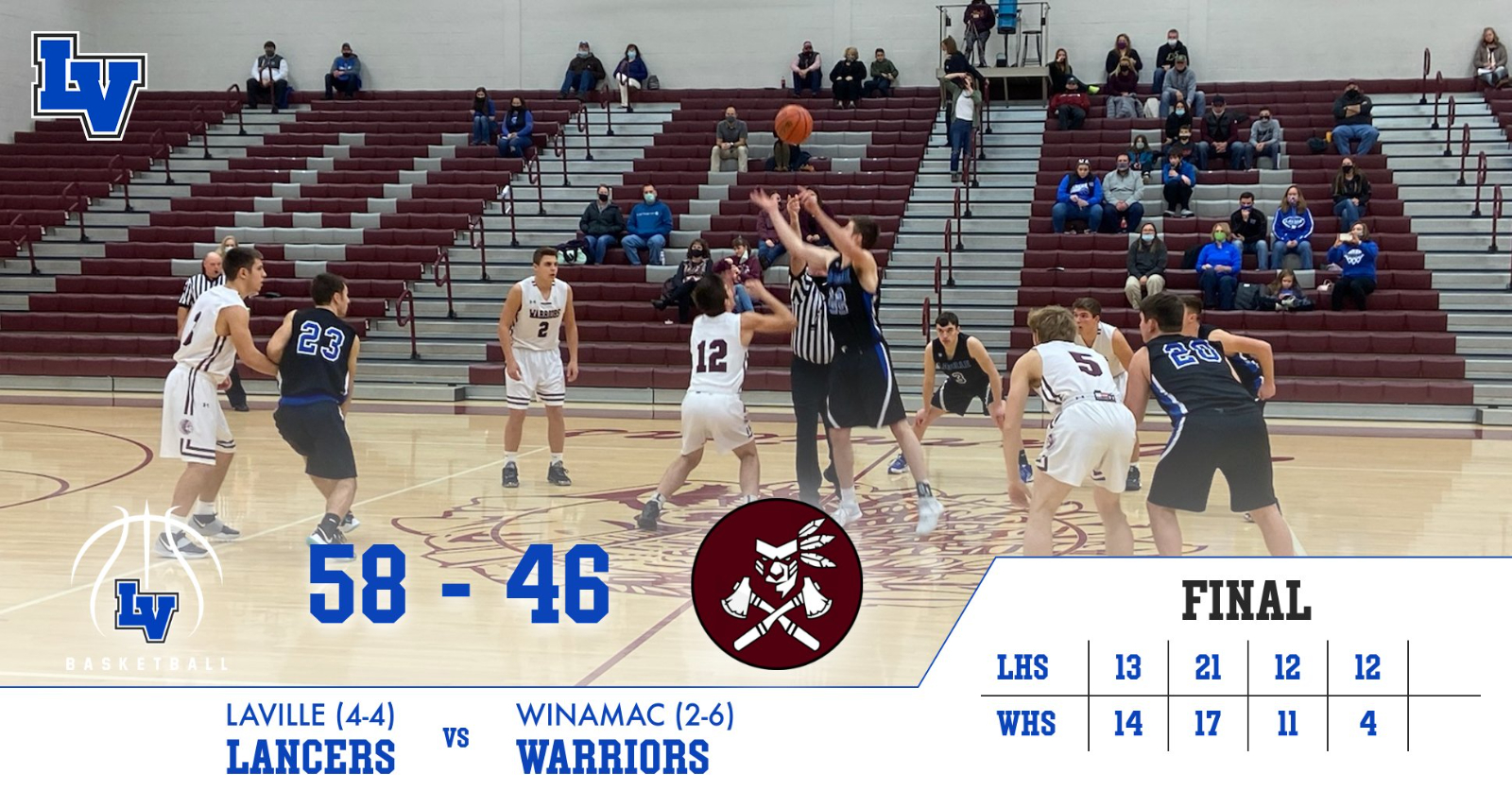 WINAMAC, IN. – In a game that was tight for much of the contest, it was LaVille that found the range and picked up some key stops down the stretch in a 58-46 Hoosier North Athletic Conference victory at Winamac.
With the win, LaVille keeps pace in the Hoosier North Athletic Conference standings with an unbeaten record.  Knox currently leads the way with a 3-0 record.  Sitting just a half-game back are Triton and LaVille at 2-0.  The Lancers will travel to Knox on Friday, January 15.  Triton, meanwhile, will play host to Culver Community on January 15. The updated HNAC Standings can be found at the bottom of this story.
Trent Fox and Russell Compton got Winamac out to a quick start to open the first quarter as the Warriors opened a 14-13 lead after eight minutes.  However, LaVille’s Leyton Czarnecki, Bobby Good, and Andrew Dill combined for 11 of the 13 first quarter points to keep the Lancers close.
LaVille ralled for 21 big second quarter points on the backs of 3-point shooting as Czarnecki hit a pair and Dill added two more treys as LaVille forged ahead for a 34-31 halftime lead.
“In the first half they went on a run and some good shooting/play by Leyton Czarnecki kept us in it,” Edison said.  “Leyton, Bobby, and Andrew all were major contributors tonight.  We really needed their 3 point shooting and key baskets.  All 3 of them played a very good game!”
The third quarter was just as close and exciting as the two HNAC foes battled for the lead.
LaVille landed three more of their 10 total 3-pointers and Good hit two crucial triples as the Lancers worked their way to a 46-42 lead heading into the fourth quarter.
LHS did achieve a double-digit lead before Winamac made one last ditch effort.
“During the 2nd half we were able to build a double digit lead, but we squandered it and they cut it to within a few points,” Edison explained.  “A couple of free throws by Ryan James, some big stops, taking care of the ball, and some big rebounds led to us being able to get over the hump against a very scrappy Winamac team.”
Edison had three players step up at crucial times during the HNAC contest.  Ayden Doyle, Alec Coleman, and Ryan James chipped in when the Lancers needed a boost.
“The game was close about the entire game,” said Edison.  “I think our defense stepped up a bit,  Even though Winamac was still able to get some 3 pointers off, they were not good rhythm shots for their players and were a little forced.  The constant defensive pressure we put on them started to pay off as the game got into the 4th quarter.
“Ayden had several key put backs for us,” continued Edison.  “He played well on defense and did a great job with his energy level.  Alec had a couple of big baskets for us and also played good defense.  Ryan had two enormous free throws down the stretch that helped us extend the lead after they had just gone on a big run.”
LaVille held its own at the free throw line, hitting 10-of-15, nipping Winamac, which finished 9-of-15 from the stripe.  The difference was the long ball.  LaVille canned 10 total treys and the Lancers needed each bucket.
Heading into the game, Edison mentioned Beau Brandt and Russell Compton as being keys, along with rebounding, and making Winamac earn their shots.
“I don’t know that we did a great job in the first half,” concluded Edison. “But the second half we picked it up a lot and were able to contain a couple of their key players.  We rebounded fairly well throughout the game and in the 4th quarter really made them take difficult shots.  It was a great win for us that hopefully we can build upon as we get ready for Knox this Friday.
Czarnecki led LaVille with 18 points and four big 3-pointers.  Dill added 14 points, along with four more treys, and Good chipped in with 10 points, including a couple big triples in the second quarter. Doyle led the rebounding effort with six, including key put backs. Good had five and the duo of Czarnecki and Coleman snagged four boards each.  Czarnecki also made his way to four assists and two steals.
Compton led Winamac, also scoring 18 points as the lone Warrior scorer in double figures.
LaVille, now 4-4 overall and 2-0 in HNAC play, still has two more games this week.  A big HNAC battle against Knox on January 15.  LHS finishes the week with a non-conference game at Elkhart Christian Academy on January 16.
Winamac drops to 2-6 overall and 1-3 in loop play.  The Warriors travel to North Judson-San Pierre on January 15 and Oregon-Davis on January 16.
* * * * *
LAVILLE 58, WINAMAC 46
At Winamac
LaVille 13 34 46 58
Winamac 14 31 42 46
LaVille – Ayden Doyle 9, Ryan James 2, Leyton Czarnecki 18, Collin Allen 0, Bobby Good 10, Andrew Dill 14, Garrett Wagoner 0, Alec Coleman 5. Totals: 19 10-15 58
Winamac – Ryan Gregor 0, Jaden Terry 2, Trent Fox 8, Carson Bennett 6, Russell Compton 18, Matt Swartzell 7, Alex Stark 0, Beau Brandt 5, Logan Schultz 0. Totals 15 9-16 46
3-point field goals: LaVille 10 (Czarnecki 4, Dill 4, Good 2), Winamac 7 (Fox 2, Compton 2, Bennett, Swartzell, Brandt)
Total fouls (fouled out): LaVille 14 (Dill), Winamac 22 (none)