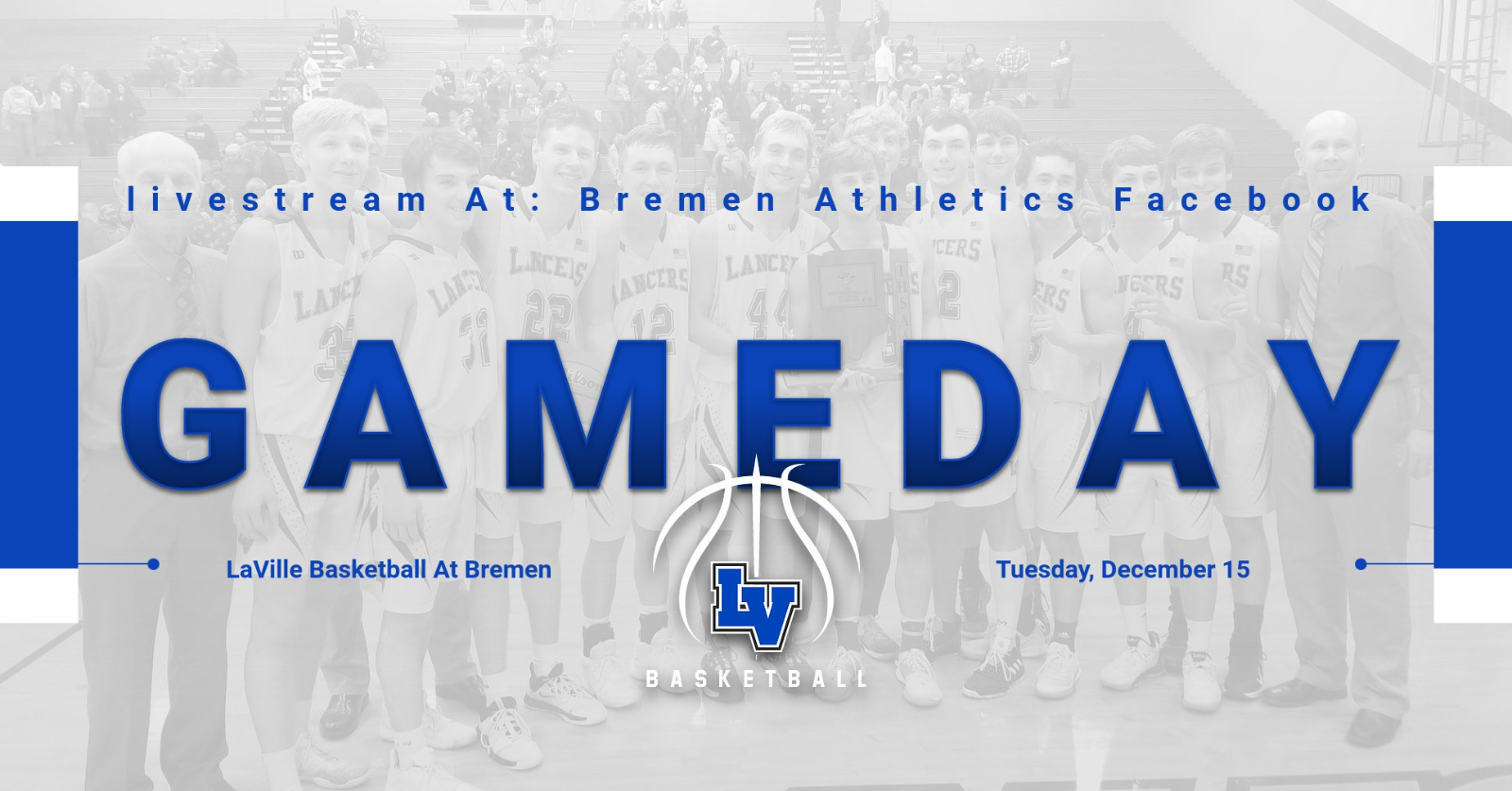 BREMEN, IN. – After a long anticipated wait, the 2019 IHSAA Sectional Champion LaVille Basketball team is set to begin the 2020-21 season.LaVille will start the season Tuesday, December 15, at rival Bremen.  The junior varsity game is scheduled to tip at 6 p.m., with the varsity game to follow.  The game will be played in Gym ‘B’ at Bremen High School.

It is the 90th meeting all-time between the Lancers and the Lions. Bremen leads the all-time series 47-42, including 19-10 in games played at Bremen High School.

The Lancers have been on shutdown due to COVID. The team returned to practice Friday, December 4.

LaVille was supposed to open the season on Friday, December 11 against Winamac.  COVID, however, interrupted that scheduled Hoosier North Athletic Conference date which allowed LaVille three extra days to practice and for LaVille coach Michael Edison and his staff a chance to evaulate and prepare.

“We have slowly gotten back on track, but it will be interesting with our first game against Bremen coming tomorrow,” said Edison as his team prepares for its 30th game all-time at Bremen.  “In a way I don’t feel prepared enough, but at some point we need to play a game and then break things down and see what things we need to get better at.”

There are several storylines surrounding the LaVille-Bremen game.
A rival game for both LaVille and Bremen. The season opener for LaVille. And, the fact that Bremen has already played three games to none for LaVille.
Bremen defeated Argos in overtime, then picked up a victory over South Central, and is coming off a 20-point loss at New Prairie.
“It will be a tough test for us with all of those things being a factor,” said Edison.  “Bremen is a very solid team and has several key weapons.”
When asked about key players for Bremen, Edison made note of:
– Devine is their starting point guard and is very athletic, makes good decisions, sees the floor extremely well, and can score when they need it.
-Miller is the coaches son and rebounds well, is an excellent shooter, will take charges, and is a student of the game.  We will have to know where he is on the court at all times.
-Hardin is a 6’4″ guard who is very athletic, handles the ball well, can score inside and out, and is a rhythm shooter.
“All three of these players are very skilled for them!.” said the LaVille coach.
According to Edison, the Lancers can expect primarily played man-to-man defense with a lot of pressure.
When asked if records matter or the time of season the Bremen-LaVille games are played Edison said: “You can throw the records out.  I would definitely agree!  Matt Miller is in his first year coaching and does a very nice job with this group of guys!  They will be an extremely tough opponent.  They will come out ready to play against us so it will be a battle the entire game.”
Edison says that the following will be keys to a Lancer victory over Bremen: “Take care of the ball – minimize turnovers. Make them “earn it” – challenge shots and not give up easy buckets – Solid 1/2 court defense, and get high quality shots on offense.”
Game On . . . .

WHERE: Bremen High School (Gym B)

COACHES: Michael Edison (182-97 in 13th year at LaVille.  Matt Miller (2-1 in first year at Bremen)
LAST OUTING: Bremen lost to New Prairie, 62-42.
ALL-TIME SERIES: Bremen leads LaVille, 47-42.
TICKET INFORMATION: Four (4) family members per player.
SPECTATOR INFORMATION: All spectators must wear a face covering both nose & mouth and practice social distancing at all times – Spectators should not linger after games and expected to leave immediately after the game has concluded – Social distancing at the concession stand and restroom facilities is also required- Spectators can sit in family units, but should social distance from other spectators.
NOTING: The Lancers – coming off their third sectional title since 2013 – are 11-1 in games to open the season – only loss to open the season under Michael Edison is a 43-38 decision at Westville on Nov. 28, 2008 – have won last 11 straight games to open the season – Return five players from a 19-6 IHSAA Sectional Championship team – senior Bobby Good 11.7 points per game and 5.3 rebounds per game – senior Leyton Czarnecki 8.4 points per game and 1.9 assists per game – senior Andrew Dill 8.3 points per game – senior Ayden Doyle 1.4 points per game – sophomore Alec Coleman 1.4 points per game – graduate 25.4 points per game – finished in a 3-way tie for Hoosier North Athletic Conference Championship with Pioneer and North Judson-San Pierre with 5-2 records – The Lancers are 15-3 in games played against Bremen under Michael Edison . . .

QUOTING: “I would definitely agree!  Matt Miller is in his first year coaching and does a very nice job with this group of guys!  They will be an extremely tough opponent.  They will come out ready to play against us so it will be a battle the entire game.” – Michael Edison on throwing out the records when Bremen and LaVille play due to the rivalry.