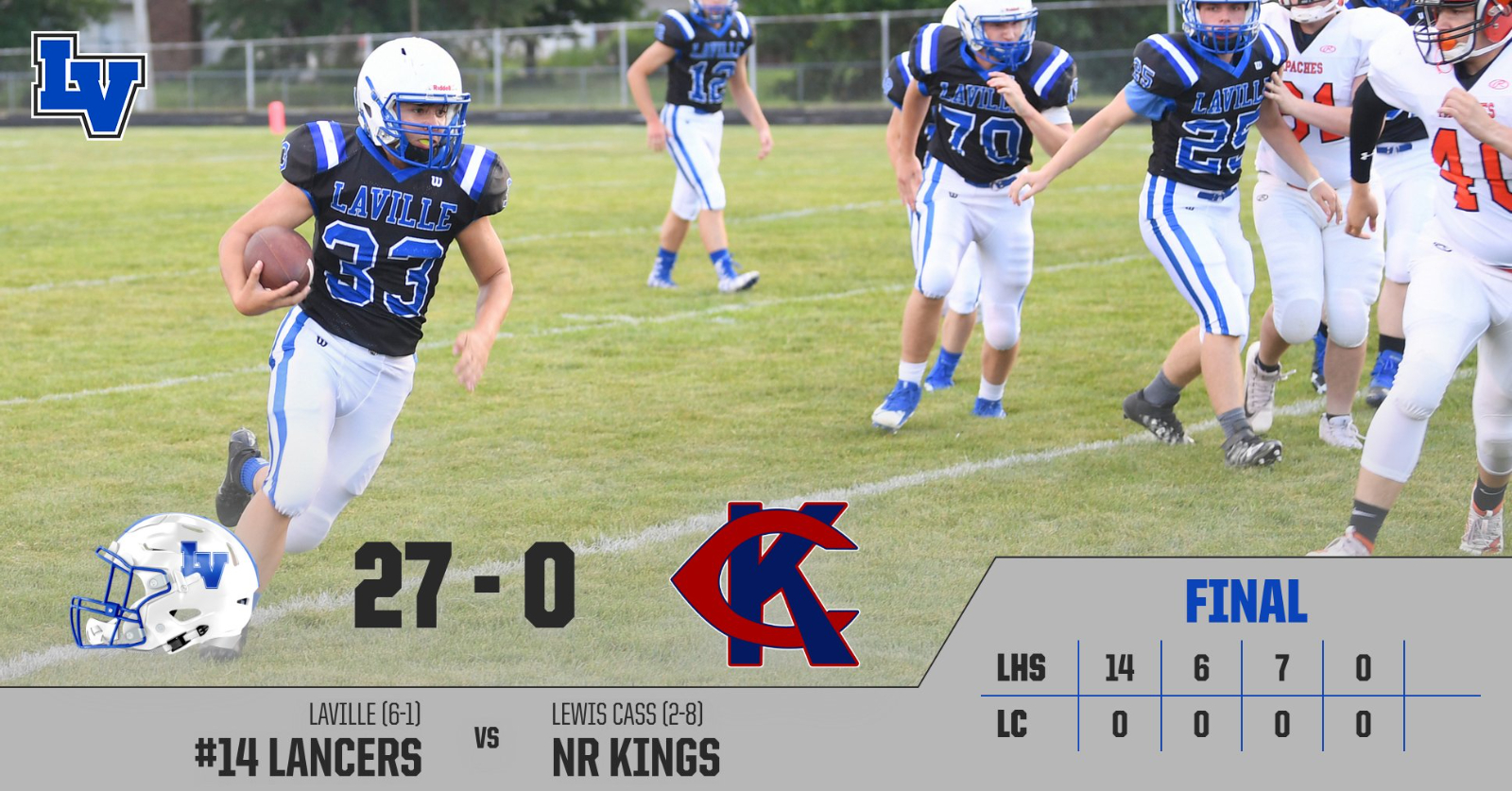 WALTON – The LaVille football team used a quick-strike offense to open an early lead and finished strong to pick up a 27-0 Class 2A Sectional 34 high school football victory at Lewis Cass.
The Lancers won the pregame coin toss and deferred to the second half.
LaVille’s defense then set the tone on a three-and-out to open the game against the Lewis Cass offense.
“We felt heading into this game that our success defensively on first downs would be a big factor in how things would pan out for the duration of the game,” said LaVille head football coach Will Hostrawser.  “Keeping Cass “behind the chains” offensively was important.  Holding them to a 3 and out on the first series did set the tone for us.”
Following a 22-yard punt against a steady wind and blowing, heavy mist, the LaVille offense went to work.
Evan Bettcher opened LaVille’s first series with an 11-yard run. Following a false start against LHS, it set up a first-and-15 from the Cass 49.
Andrew Dill then took a hand off on a reverse, picked up blocks by Ayden Doyle, Tyler Studon and a big block inside the red zone to send the LaVille speedster into the end zone just 45 seconds into LaVille’s first series of the game.  Leyton Czarnecki added the point after.
After holding Lewis Cass to another three-and-out, the Lancer offense was set up at their own 49-yard line.
This time, Dill takes the hand off from a single back set up, goes off the right side, picks up a key block down field from Bettcher and goes 51 yards to pay dirt.  Czarnecki once again added the PAT.
“Anytime Andrew touches the ball, there is a potential for big plays,” said Hostrawser.  “Last week we adjusted a few things offensively to get the ball in his hands and he did a real nice job taking advantage of those opportunities.”
Lewis Cass had its best field position of the game following a LaVIlle fumble that set the Kings up at the LHS 38.
The defense, however, stiffened and forced Lewis Cass to give the ball up on downs when Collin Allen blew up an attempted rushing play for no gain on a fourth-and-two from the LaVille 30-yard line.
Following a Lewis Cass punt, LaVIlle went back to the ground attack. The Lancers used a four-prong rushing attack of  Dill, Bettcher, Lucas Plymmer, and Paul DeWitt to cross the goal line.  DeWitt handled the final two yards to put LaVille on top 20-0.  The point after pass attempt failed.
Lewis Cass would put together its best drive of the game, starting at its own 27.
The Kings would mix Tyler Johnson with Keegan Lytle to move the ball into LaVille territory, but several times Lancer defenders stepped up to make big plays.
Doyle and Allen combined for a tackle for loss early in the series.  Then, on a second-and-nine play Doyle and Bettcher pressued Johnson into an incomplete pass.  The final straw that ended the Lewis Cass drive came on fourth-and-12 from the LaVille 35 and Allen was able to force Johnson into a seven yard loss and turn the ball over on downs.
“Each of these games from here on out could potentially be our last,” Hostrawser said when asked about his defensive unit.  “If our guys want to play further down the tournament trail, they must play inspired and play with a sense of urgency.  I thought we stepped up nicely and did that against Cass.”
Bettcher closed the scoring for LaVille following an interception by Lucas Plummer.  Bettcher ended the 10-play 70-yard drive on a five-yard TD jaunt. 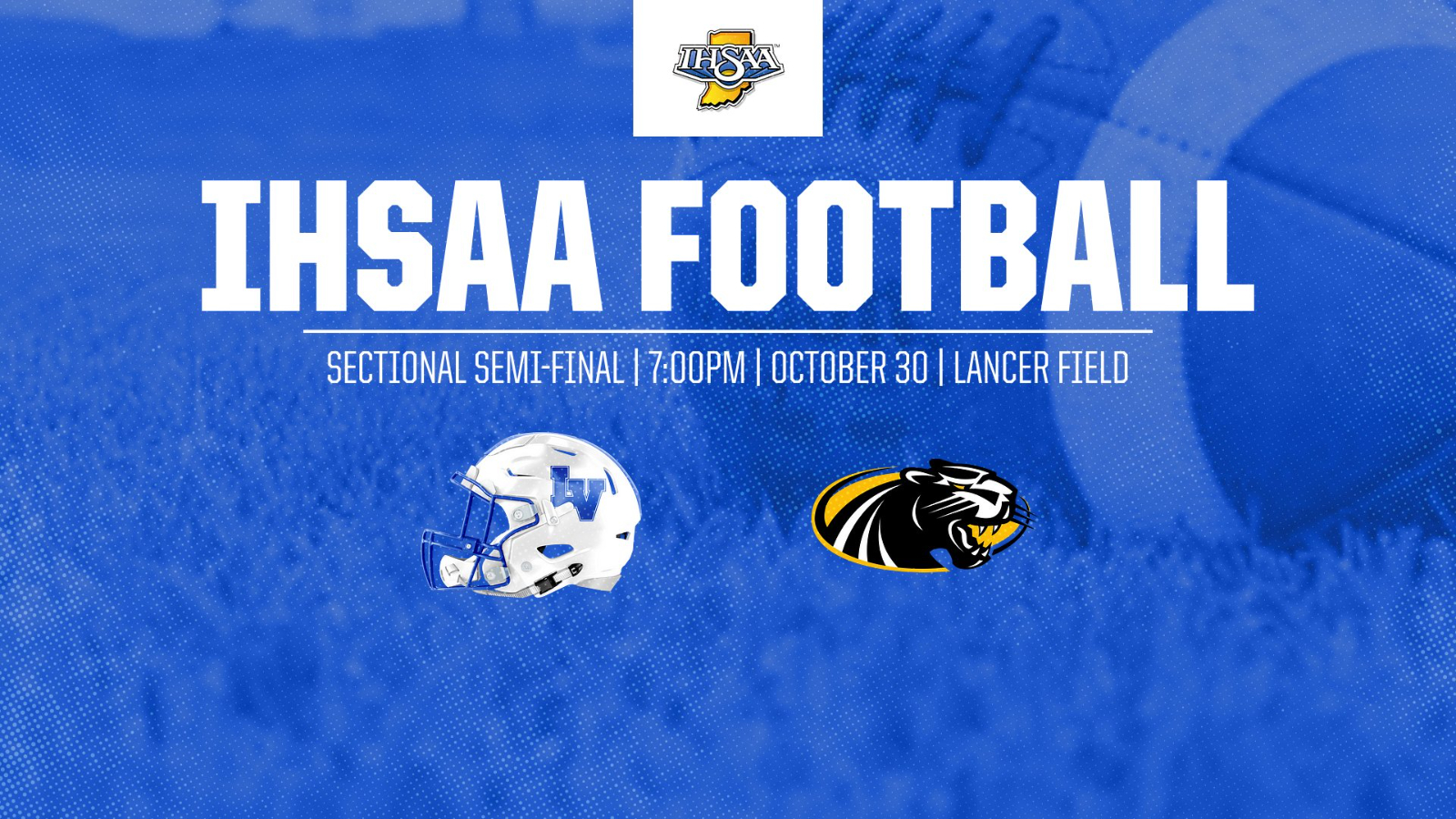 The victory sets up a battle with Hoosier North Athletic Athletic Conference foe Pioneer in the second round of the IHSAA state tournament.  The game is scheduled to be played on Friday, October 30, at Lancer Field.
“Half the teams in the state were eliminated last weekend – so playing Pioneer is an excellent opportunity – and playing at home is a bonus,” Hostrawser said when asked about his initial thoughts of playing the Panthers.  “I can guarantee one thing – we are going to show up and play hard for 48 minutes . . . our guys will certainly be ready.”

The Lancer defense forced 10 tackle-for-loss plays, while limiting the Kings to less than 170 yards of total offense.

On the offensive side, LaVille had nine rushing plays of 10 yards or more while picking up 293 total rushing yards.
“I thought in the second half we did a real nice job running the ball,” Hostrawser said of his offense.  “Our guys up front, Erik Bedock, AJ Bedock, Hudson Doyle, Jayden Laurence and Collin Allen really dug in and blocked well.  It was no secret we wanted to run the ball – they did a fine job paving a path for our running backs.”
DeWitt finished with 135 yards on carries.
“Paul is a talented and versatile player,” said Hostrawser.  “We use him in a variety of ways.  As a running back, he has the speed of a tail back but the running strength of a fullback – that is a rare combination.  He did a great job grinding out tough yards as the game progressed.”
Dill finished with 109 yards on just four carries.
LaVille threw the ball just one time in the game and that was on a muffed point after attempt that forced Czarnecki to try and get rid of the ball.
Class 2A Sectional 34
At Walton
LaVille 14 20 27 27
Cass 0 0 0 0
Scoring Summary
L – Andrew Dill 49 run; Leyton Czarnecki kick
L – Dill 51 run; Czarnecki kick
L – Paul DeWitt 5 run; pass failed
L – Evan Bettcher 5 run; Czarnecki kick