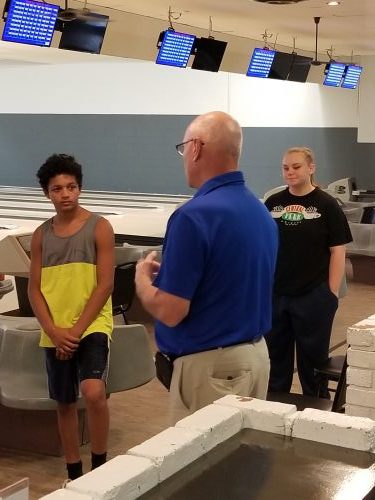 LAKEVILLE, IN. – Its been since 2012 since LaVille High School has fielded a bowling team.

That is all about to change.

“We are excited to have the Lancer Bowling team back after a long hiatus,” said LaVille Bowling coach Kevin Kubsch.  “The last Lancer team was in 2012 and a lot of things have changed since that time but the fundamentals of the game are the same.  The difference is mostly in the bowling equipment used today.”
LaVille has six bowlers that will form a co-ed team. The Lancers will start the 2020-21 with six freshman on the roster.  John Andert, Paul Clayton, Lowell Heminger, Gabby Paul, Noah Samuel, and Jaedyn Shaw will don the Lancer royal blue and white.
“We have received a lot of good feedback from the kids about what we are looking for in our team and our expectations,” explained Kubsch.  “They are a young group and the team consists of all freshman bowlers and that is exciting in itself because we are going to develop together.  They are excited about being a part of the team.”
According to Kubsch, the first LaVille practice was last Saturday and he was please with what he saw.
“It was very productive in that we had an hour worth of actual throwing the ball as each student had their own lane and by the end there were some sore arms and hands,” said Kubsch.  “We did see some noticeable  improvement by a few of the team members.  We have practice scheduled for this Wednesday and I anticipate we will see even more improvement especially when the team has their own equipment instead of the standard house equipment.
“They have a fair knowledge right now of how to deliver the proper shot but we need to work on release points and how we will have to adjust to the different conditions that we will bowl on during the year,” continued Kubsch.  “The difficult part for such a young group is to understand the adjustments that need to be made and at one point do they make an adjustment.  I guess that is where the coaching staff comes into play.” 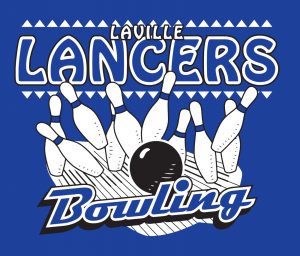 According to Kubsch, the scoring process is that each team member will bowl head to head against an opponent for two points for a total of 10 points per game.  We will bowl two games which means that head to head competition would score a possible 20 points.  Then there are points earned based off the team total for both games bowled.  A team will earn from from 12 to 1 point based on what that total is compared to the totals of all the teams bowling in the match that day.  In other words if we were to win all our head to head matches we score 20 points and if we finished 2nd in total pin count we earn 11 points and this would mean we earn 31 points for the day.
LaVille will particiate in the the Michiana West conference.  Along with the Lancers will be Penn, South Bend St. Joseph, Mishawaka Marian, New Prairie, John Glenn, South Bend Adams, South Bend Clay, South Bend Riley, Mishawaka, Plymouth, and Argos.
Kubsch says that he expects Marian and Penn both to have solid teams as they have a number of returning bowlers with great experience both in high school bowling and bowling in youth leagues and tournaments.
“That is one thing I would like our kids to do as well is to get involved in youth leagues and tournaments,” said Kubsch.  “This will surely make them better.
“Our first match is this Saturday at Chippewa Bowl against Argos and the first match begins at 1:00 pm.” Continued Kubsch.  “We are really looking forward to starting and we are going to get better every week but the one thing I would like the team to understand is that we are young with not a lot of experience but we will get better and we will continue to compete.
Kubsch closed by saying:  “I would like to thank Mr. Mawhorter, School Board, and the Lakeville Lions for their support in bringing back bowling to Lancer Nation!”
* * * * *
2020-21 MICHIANA WEST BOWLING CONFERENCE
Boys/Co-Ed
Mishawaka
Penn
Plymouth
John Glenn
South Bend Riley
South Bend Clay
South Bend St. Joseph
New Prairie
Mishawaka Marian
South Bend Adams
Argos
LaVille
Girls
Mishawaka
Penn
Plymouth
John Glenn
South Bend Riley
South Bend Clay
South Bend St. Joseph
New Prairie
Nov
24