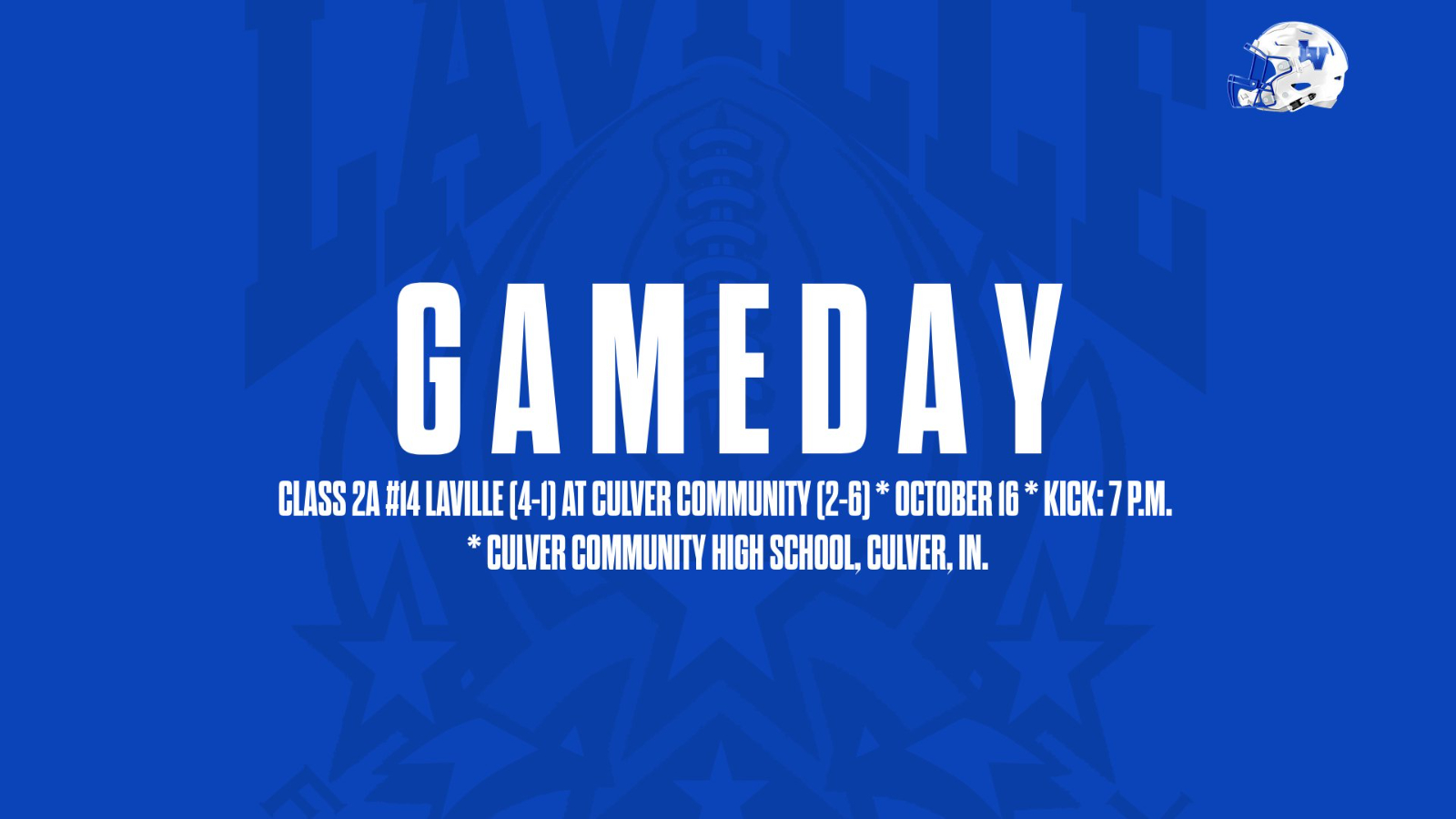 LAKEVILLE, IN. – The LaVille Football team has experienced both ends of the spectrum over the course of the last two weeks.  On Oct. 2, the Lancers won an emotional, come-from-behind 17-14 victory in the final two minutes in a non-conference showdown with rival John Glenn.

Last week, LaVille rallied from down a touchdown to take a 7-6 lead against Class 1A #9-ranked North Judson-San Pierre before the BlueJays hit a 29-yard field goal with just under two minutes and held on to beat the Lancers, 9-7.

On Friday, October 16, the Class 2A #14-ranked LaVille football team will travel to Culver Community to close not only the regular season, but Hoosier North Athletic Conference play.

The first-ever meeting between LaVille and Culver Community came on September 10, 1976.  The Lancers defeated the Cavaliers 43-0 at Lancer Field. Roger Griggs was the head coach of a LaVille team that completed a 2-8 season in 1976.

Culver lost the first 14 meetings with LaVille until a 25-22 Cavalier victory on October 12, 1990, at Culver Community High School.

We had a chance to talk with LaVille Head Football Coach Will Hostrawser about last week’s heartbreaking loss to North Judson-San Pierre, the Culver Community offense and defense, and keys to a Lancer victory in the final week of the regular season and heading into the state tournament.
Following the film session Saturday after NJSP, any further thoughts regarding what the Lancers took away either positive or things to work on as you head into Friday’s game with Culver Community?
We have really emphasized offensive execution this week – especially up front.  Our offensive line must improve the consistency of their effort and execution.  They have gotten to know our 5 man sled very well this week…
Talk about the Culver Community defense.  What can we expect from the Cavaliers and who are the key defensive players?  What scheme does Culver Community run?

Culver runs a base 5-2 front and is extremely aggressive on the defensive line.  They also like to blitz linebackers frequently.  Their inside linebacker Hunter Evans and cornerbacks Ian Brown and Jason Cadle are all stand out players.
Talk about the Culver Community offense.  What can we expect from the Cavaliers and who are the key offensive players?  Will Culver be a run or pass dominant team or will they try to use the run game to set up the opportunity to pass the ball?
Culver runs an old fashioned smash mouth double tight T formation from ages ago – and they run it with great efficiency.  It is a scrum style of running game that is tough to stop.  They will attempt to drain the life out of an opponent by running plays for 3-4 yards at a time and keep your offense off the field.  They run right up the middle or off tackle for about 90% of their plays.  In 2 games we have scouted, they have thrown the ball 5 times… but their passes are always well timed and effective.  They play as a unit more consistently than any other team on our schedule. We must be ready for a trick play here or there as well.
Close the season with an HNAC contest and on the road. How important is it to play well on the road as LaVille gets ready for the state tournament?
Talk about keys to a Lancer victory Friday against Culver Community.
This year is a little different in that we are now doing what we would have normally done 3 weeks ago in our preparation – you want to be clicking on all cylinders heading into the state tournament to make a run – so this week is very important to us.  We need to execute our game plan in all three phases of the game with precise consistency.  To come away with a victory against Culver, we must own 1st down on both sides of the ball – and the payment will come in the trenches.  We must play well up front.  Defensively we must gang tackle.  Offensively, we must string together plays without negative mistakes.
G A M E D A Y
TEAMS: Class 2A #14 LaVille (4-1) at Culver (2-6)
GAME TIME: 7 p.m. ET
COACHES: Will Hostrawser (59-27 in eighth year at LaVille.  Mike Zehner (23-29) in fifth year at Culver;  50-45 in ninth year overall)
LAST OUTING: LaVille lost to North Judson-San Pierre, 9-7. Culver lost to Pioneer 54-6.
SERIES: LaVille leads Culver, 37-12, in the all-time series.  LHS defeated CHS 43-0 at Lancer Field on September 10, 1976 in the first-ever meeting.
LAST MEETING: LaVille defeated Culver 13-8, October 18, 2019.
Oct
24