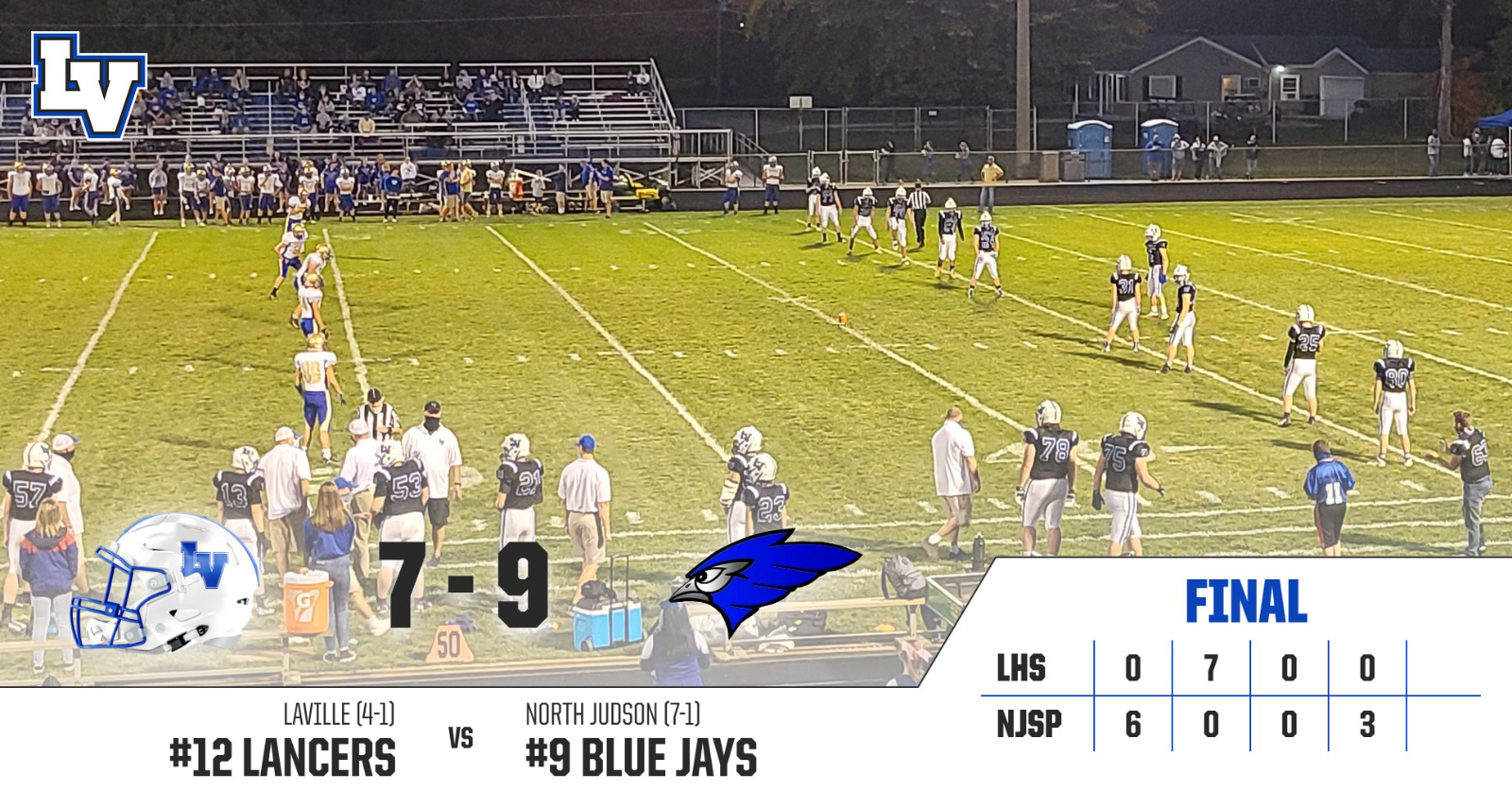 LAKEVILLE, IN. – In a game featuring different styles, it was the kicking game that proved the difference as Class 1A #9 North Judson-San Pierre defeated Class 2A #12 LaVille 9-7 in high school football at Lancer Field.
The BlueJays came into Friday’s contest as a team that runs the wishbone offense, or a variation of it, and quite effectively at a 208 yard per game average.
North Judson-San Pierre scored first taking the opening drive 84 yards in eight plays as Cheyenne Allen powered in from the 2-yard line. The point after was failed and the BlueJays led 6-0.
LaVille, a team that loves to set the passing game up with the run, came in averaging 129 yards on the ground, but 153 through the air.
The Lancers, after holding NJSP on downs just outside the goal line with 9:56 left before halftime, did what it has done effectively so far this season.  LaVille mixed in the run with the pass, used a roughing the kicker penalty to its advantage and marched 97 yards on 16 plays as Andrew Dill sped into the end zone to tie the game at 6-6.  Leyton Czarnecki came on to add the PAT and the Lancers led 7-6.
The Lancers used 11 rushing plays and four passing plays to go the distance and take the lead.
“I thought we responded well following the goal line stand,” said LaVille football coach Will Hostrawser.  “We executed our game plan and didn’t have negative plays.  Unfortunately that was the only drive of the night we were able to do that.
The game would stay that way until NJSP used  5:22 off the clock in the fourth quarter to put together what would be the game-winning field goal.  The BlueJays had not attempted a field goal all season until Payton Roberts set up on 4th-and-12 for a 29 yard attempt. The kick was just long enough and NJSP held off LaVille for a hard-earned victory over a disappointed Lancer squad.
LaVille was coming off a come-from-behind victory 17-14 a week ago over rival John Glenn.
Friday, North Judson-San Pierre simply executed its wishbone attack a bit better and kept the LaVille offense from the big play to secure its first victory at Lancer Field in the short 11-game series.
“This game was certainly a defensive struggle,” said Hostrawser.  “Our defense answered the bell time after time with numerous red zone stops.  They played well.”
When asked what adjustments the coaching staff made for the second half, Hostrawser responded: “We really just drew attention to the details we worked on all week in practice – staying true to our penetration depth and pursuit angles on the defensive line – making the sure the inside linebackers read their keys and took proper angles getting to the ball, making sure the outside linebackers did so as well.  We just focused on the details of our defensive plan for the week.  The kids did a real nice job rallying together in doing so.”
With LaVille being able to score in the first half touchdown, they were not able to reach the end zone in the second half, but it was not without going vertical.
“I don’t know if they (North Judson) did anything specifically – we just didn’t make plays,” Hostrawser said when asked if he felt Judson made any second half adjustments.  “We took a couple of shots that just missed that would have been game changers if we hit them.  We must be more consistent in executing our offense.  We still struggle with negative plays that put us behind the sticks when we are driving leading to too many third and long situations – those are hard to overcome.  We will certainly work towards getting those situations fixed this week in practice.”
Cheyanne Allen led the Judson offense with 109 yards on 25 carries.
Andrew Dill led the LaVille rushing attack with 62 yards on eight carries.
“We did a poor job of handling their defensive pressure while on offense,” the LaVille coach summed up.  “We simply got beat in the trenches.  Bottom line – we were one play away from winning that game – one play from being 5-0.  We made that play against Glenn – this week, we were on the other side of the table.  I know I didn’t get a lot of sleep Friday night – and neither did the rest of the coaching staff.  We were all making plans on what to fix this week – preparing for the next game.”
The game also witnessed the return of senior Ayden Doyle to the Lancer line-up.  Doyle came in on both defense and offense and his play made a positive impact for the Lancers.
LaVille, 4-1 overall, is scheduled to travel to Culver Community for an HNAC game Friday, October 16 at 7 p.m.  North Judson-San Pierre, meanwhile, improves to 7-1 overall and will play host to Pioneer next week.