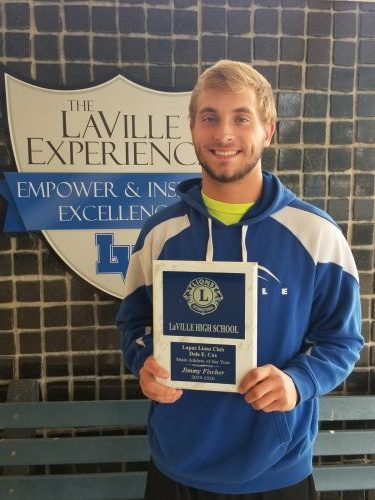 LAKEVILLE, IN. – Senior Jimmy Fischer has been selected the 2019-2020 Lapaz Lions Club Dale E. Cox Male Athlete of the Year.  Fischer was chosen following a vote from all of the LaVille High School head coaches.

Fischer, who plans to major in economics at Hillsdale College, hopes to become a professor someday.  He also indicated that he may participate in athletics as well while attending Hillsdale.

When asked how he felt when he first heard that he earned the 2019-2020 male athlete of the year Fischer said, “I was shocked at first, having so many phenomenal athletes in my class I was certain one of them would’ve received the honor. Now I just feel completely honored to have won this award, words cannot really describe how incredibly appreciative I am for those who felt I should win the award. I couldn’t have won this award or achieved the things I did without my coaches and teammates.”

Fischer was listed as a wide receiver and defensive back on the LaVille football roster.

Fischer hauled in 19 catches while on the varsity football team, including 13 balls for 183 yards his senior season.  He also caught three career touchdown passes.  Fischer averaged 17 yards per catch and had a long of 66 yards his sophomore season.

When asked what his most memorable football moment was, Fischer shared: “Obviously winning sectionals is always going to be a great memory as a part of any sport. The overwhelming joy you feel is something you can’t describe to someone who hasn’t experienced it. However, my favorite memory/memories would have to be going over to Leyton Czarnecki’s after games on Friday nights, and then Saturday film after big wins. Goofing around and staying up until 6am at Leyton’s has given me more memories then I can include, but I will always cherish those times. Saturday morning film after a big win was always fun too. Going on 2 hours of sleep and staying awake, (well, most of us) during film was something I still can’t believe we were able to accomplish.

“One memory in particular always makes me laugh; Junior year  after beating Glenn 55-14 on homecoming night, that Saturday morning we were all in great moods for film, including Coach Hostrawser,” continued Fischer.   “There was only one problem, our starting quarterback Ayden Doyle didn’t make it from Leyton’s house to film that morning. We had woken him up to get ready and come with us, but somehow he snuck back to bed and no one noticed. It’s a funny memory even Coach would reference from time to time my senior year just to mess with Ayden. Needless to say it was easily one of the funniest experiences I’ve had as a LaVille athlete.”

Besides being a three-sport athlete, Fischer participated in DECA. DECA membership is available to students with career interests in marketing, entrepreneurship, finance, hospitality and management in grades nine through twelve. DECA membership is also open to DECA advisors, alumni and professional members. Students who are in college may join Collegiate DECA.

Fischer said he has received great advice from the coaches he has had, but the advice he received while attending an Indiana High School Athletic Association leadership conference has always stuck with him.

“The summer heading into my junior year, myself and a few others were selected to be a part of the IHSAA leadership conference,” recalled Fischer.  “We went to several different classes and participated in several events. One lecture always stands out to me. The professor tells a story about how he turned down a full ride for soccer at a small school to go and play soccer at IU. The coach for IU told him we would not make the team. He still insisted on IU. When he went to the tryout there was one spot available, and he got it. He never played, usually just carried the team water his first few years. It wasn’t until his senior year he finally got to play. But he said he will always be happy he followed his heart and got to play at IU. His advice was “follow your dreams, no matter the cost, no matter what people think, follow your heart.” I wrote it down on an index card and still have it to this day.

“I have received incredible advice from each of the wonderful coaches I was blessed to have,” continued Fischer.  “But this advice from a previous IU athlete turned professor always stuck with me.”

Following the football season, Fischer went on to compete for coach Michael Edison on the Lancer Basketball team.

Fischer played in 62 varsity games for the Lancers, scoring 180 career points.  Fischer’s career-high came off a 19-point effort against West Noble in a game that found Fischer 6-of-6 from the free throw line, a 3-pointer, and five crucial rebounds.  Fischer played mostly in the post area, but also had the range to step outside and knock down the 3-pointer, as well.  He hauled in 176 career rebounds, including 119 boards his senior season.

“It is hard to pick one memory, in any of the sports I played but especially basketball,” explained Fischer.  “Whether it was the night we stayed up super late expecting an easy practice the next day, only to find out during practice that we certainly did not have one, or all the times coach got super angry and threw stuff when we were underperforming.

“My favorite memory would have to be winning sectionals my senior year, in my eventual last game as a LaVille basketball player and LaVille athlete,” continued Fischer.  “After years of always falling short, it felt amazing to win it with my best friends and to win it for the best basketball coaches anyone could have. I would also like to add a close second favorite memory – freshman year on JV, coach Jared Farver told Kolby Watts in the middle of practice “if you touch the rim right now we can all go home” Kolby up to this point in his life had never touched the rim before. Kolby got a running start and nicked the bottom of the rim with his nail that he must’ve forgotten to cut for a few weeks. Farver held true to his word and we got to go home.”

Fischer also explained that, “I made more friendships and memories than I ever thought possible and I learned so many valuable life lessons along the way. It was a once in a lifetime experience I will always cherish. If anyone is ever nervous or on the fence about joining an athletic team, just know my experience provided me with countless stories, brothers, and role models, I highly recommend joining a team at LaVille if possible, you won’t regret it.

Following the long winter basketball season, Fischer then moved on to play baseball for the Lancers.

Fischer played the infield and pitched for coach Brian Lawler.

“Winning sectionals my junior year, our whole team drinking energy drinks and getting pumped up before playoff and conference games, or even just messing with the coaches during practices,” recalled Fisher is some of his memorable moments on the diamond.  “My favorite memory, and also probably my least favorite would be the regional game my junior year. Whenever we talk about baseball we always talk about that game, how Leyton Czarnecki hit a grand slam to give us the lead late in the game, and then giving up the lead in the final innings on 4 or 5 dribblers up the middle to eventually lose.”

Fischer also felt, “a great responsibility to represent not only myself, but my teammates and coaches, school, and community” whenever he put on the Lancer uniform.  “My actions did not just speak for me, they spoke for hundreds of people.”

As we closed our interview portion, Fischer shared that, “At the end of the day, my athletic experience and success wouldn’t be what it is without the great coaches and teammates I was surrounded by. They are just as deserving, if not far more deserving of recognition than I am because none of it would have happened without them.”

“Athletics are great because you can compete with others and learn the value of hard work,” concluded Fischer.  “But for me the relationships I built and the memories I made will always be what I am most thankful for.”