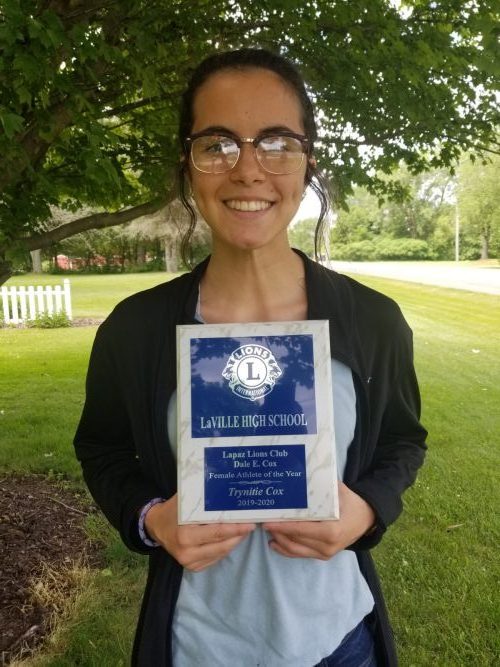 LAKEVILLE, IN. – Senior Trynitie Cox has been selected the 2019-2020 Lapaz Lions Club Dale E. Cox Female Athlete of the Year.  Cox was chosen following a vote from all of the LaVille High School head coaches.

Cox, who plans to continue her academic and athletic career in soccer at Indiana University at South Bend, earned 10 varsity letters.  The 6-foot-1 versatile athlete earned four letters in soccer, two letters in basketball, and four letters in track and field. Cox plans to pursue a bachelors in nursing, and becoming a RN.  She then plans to attend the University of Indianapolis to continue her nursing education and attain a master’s degree in nursing to become a nurse practitioner and specialize in neonatology.

When asked how she felt when she first heard that she earned the 2019-2020 female athlete of the year Cox said, “I was speechless. When I was first told about my winning I immediately thought of my great grandpa Dale. I thought of how he was looking down on me and had to be so proud, I was so ecstatic to know that I won because I was able to show him that I was still carrying on the legacy he had left behind when he left LaVille. I am so thankful for my coaches and teammates and the community for the love and support I have gotten from them this past four years. I would have not been as successful as I was if it were not for them, so a big thanks goes out to them.”
Cox played goalie for the Lancer Girls Soccer team,  especially the last two seasons.  She made 383 saves in 42 matches in goal.  Occasionally she would play in the field and scored three career goals.  During the fall of 2019 Cox made 225 saves with a save percentage near 90-percent.
“I would have to say my favorite sport was soccer,” said Cox.  “That was the sport I was the best at and the most fun playing it, not that I didn’t find my other sports fun. I just enjoyed soccer a bit more.”
Besides being a three-sport athlete, Cox participated in concert band, marching band, and pep band. Others included madrigals and vocal jazz, National Honor Society, FCS (Fellowship for Christian Students), Best Buddies, Art Club, Pep Club, Student Council, and Mentoring.
Cox said she really enjoyed LaVille Athletics.
“My experience with LaVille Athletics was one of the best,” said Cox.  “To say I had an amazing experience is an understatement. Participating in athletics at LaVille has shown me many things. It has shown me sportsmanship along with leadership skills. LaVille athletics has given me the chance to play in every game with the best sportsmanship and also be a team leader and be able to show my teammates what a good example of sportsmanship and also show them a good example of a good team leader.”
When asked about her most memorable moment in each of her three sports, Cox had no trouble in her recollection.
“My most memorable moment in soccer was being in the craziest rain and thunderstorm during a sectional championship,” recalled Cox.  “The game was so intense but the weather added so much more intensity. In the end I loved being able to be the goalie that led my team to a sectional title in soccer that year. Couldn’t have done it without my team and coaches.”
During the basketball season, she was always around the ball and had a nose for being in position to grab rebounds.
“My most memorable moment in basketball is being able to say I set a small school record for girls basketball, by getting around 20 rebounds in one game,” said Cox, who hauled down 20 rebounds in a 36-14 victory over Jimtown to open the 2018-19 season.  Cox would corral 230 rebounds during the 18-19 season, including 16 games where she registered double-figures in rebounding.  She finished her career with 11 double-doubles and 365 total rebounds, good for an 8.3 rebounds per game average during her varsity career.   She finished with 266 career points with a career-high 16 points against South Central (Union Mills) and Washington Township.
Cox was just as involved during her track and field career.  She ran the 400, the 4×400 relay, the 4×800 relay, and participated in the long jump.
“My most memorable moment in track and field is being able to run at a regional level of competition with three other teammates,” exclaimed Cox, who also ran the 100 hurdles in one meet her freshman year.  “Our girls 4×400 team was called back and had qualified to compete at the regional level. I also think being a part of a team that the boys and girls teams won a championship, my junior year the boys and girls track and field team won the Dennis Rippy Invite.”
Cox says she felt a lot of pride when she wore the blue and white of LaVille.
“Each time I was able to put on a LaVille uniform I felt the most pride,” said Cox. “I felt as if I were able to show the other schools and community that I was so proud of who I played for and the team I was on. I was also able to show my community that I tried my hardest to be a team player and show my sportsmanship.”
According to Cox, the best advice she has been given is to, “leave it all on the court or field and be proud of the game I just played, no matter the outcome, win or loss.”
Cox closed our interview by expressing her appreciation to all of Lancer Nation for their support during her career.
“I would love to share a huge thanks to LaVille and my peers, teammates, family, and community,” concluded Cox.  “My high school career including sports would not have been as successful as it was if my family, peers, teammates, the community, and the cooperation were not by my side like the way they were. All of those people supported my team and I and everything we did. Thank you so much LaVille and I will for sure miss high school and playing high school sports. I am so excited to continue my education and sports and see where my future takes me!”
Lancers Official Sponsor