LAKEVILLE, IN. – When Lee Dennie was hired as a teacher 38 years ago at LaVille Jr.-Sr. High School, it probably never crossed his mind what a strong relationship he would develop with many staff members and the lives of student-athletes that he would touch.

Along the way the course of his 28 years of coaching, he coached junior high basketball, varsity football, varsity boys track, and varsity girls track.  The latter of whom he would spend 23 years guiding the Lancer Girls Track and Field program to an 164-58-4 dual meet record and making an impact on hundreds of young ladies before retiring from coaching in 2007.

He helped turn LaVille Girl’s Track into a regular contender for relay titles, conference championships, and ended up being the small-school threat in the loaded Indiana High School Athletic Association sectional field that featured large schools like Penn and the South Bend Schools during the single-class track state tournament.

Following an interview with the LaVille administration back in 1982, he was hired to teach freshman Earth Science, which he ended up teaching for 11 years, and junior high social studies.

Following the teaching interview came the interview to be a part of LaVille Athletics, more directly LaVille Football.

“While living at my wife’s Mother’s home in Whiting, Indiana, I got a call from Maury Strycker, principal at LaVille,” recalled Dennie.  “I interviewed with him (Maury), Dale E. Cox and Larry Stillson (head football coach). My interview with Stillson was longer than the teaching interview.”

Following the athletic interview, Dennie found himself coaching in the fall, the winter, and the spring.

“I had to coach varsity football, 8th grade basketball and varsity boy’s track with Mr. (Joe) Krom,” explained Dennie.  “After three years as an assistant boy’s track coach, the varsity girl’s track coaching position became available, so I coached from 1985 to 2007 with the girl’s track program. I stopped coaching varsity football in 1993, when my wife began teaching again as a third grade teacher at the LaVille Elementary School.”

Dennie was no stranger to coaching, let alone multiple sports, as he started his coaching in 1979 in South Dakota.

“In football as an assistant, I coached the defensive line and the offensive backs; until Walt Pickerall became the head coach,” said Dennie, who was a member of the LaVille Football staff from 1982 to 1993.  “I also was the trainer (long before current athletic trainer Gary (Hall)!). Under head coach Pickerall; I also became responsible for calling the defenses during games! 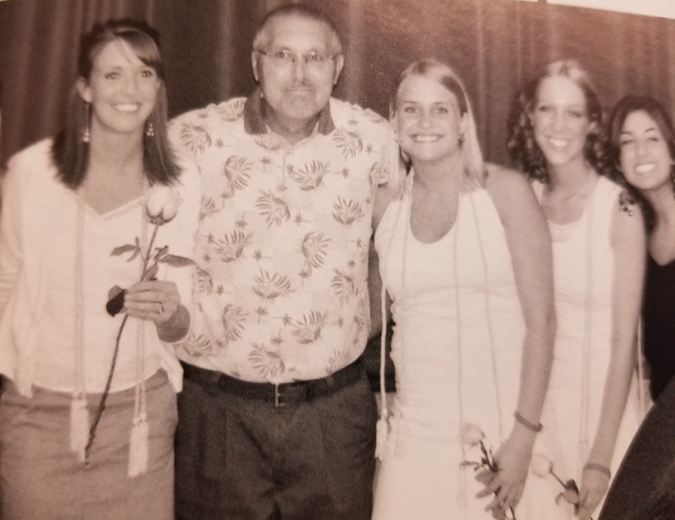 Dennie coupled that experience as a track manager with the knowledge from his junior high track coach and began a love for track and field.

“I learned about track meet organization and basic fundamentals on all of the various events,” said Dennie.  “That sparked an interest that I continued until 2007!”

Before the spring and the track season, Dennie’s first-year in the LaVille program was a very special time.  The Lancers started 4-0 and allowed just 20 points in four games, beating Knox, Bremen, Culver Community, and John Glenn.  The Lancer ‘D’ shut out the Redskins and Falcons.

Following a 34-28 loss to Northern State Conference rival Jimtown, LaVille went on another four-game winning streak.  First it was a shutout win over New Prairie, another defensive goose-egg for Rochester, a school-record 77 points and shutout of Triton, before a 35-14 win against Central Noble.

The Lancers closed the season with a 30-14 loss to Culver Military Academy before a strong run in the state tournament.  LaVille posted its sixth shutout of the season with a 20-0 win over Attica in the first round.  The Lakeville guests hit the road for a thrilling 23-21 victory at Carroll of Flora, which was about a two-hour drive. Following the win over the Cougars, the Lancers drew a home game against Oak Hill on November 12, 1982, in the semi-state championship.  That team finished the season 10-3 overall to go with a sectional and regional championship.

“My first year, 1982, the team won the regional!” said Dennie. “To this day no other LaVille team has ever won a regional!  We had several opportunities to win sectionals, but lost in very close sectional championship games.
“One of my saddest moments, was the death of Aaron Platz!” continued Dennie. “I coached him as a running back.  He also was a linebacker, so we have a white spruce tree planted back by the practice field in his memory! I loved coaching football, but I retired from it in 1993, when my wife started teaching again.”

On the trackside, Dennie had several very strong squads.

“The LaVille Track program dominated the Northern State Conference for much of my coaching experience,” explained Dennie.  “We had dedicated, intelligent, and talented athletes. We never could win a sectional, because unlike the other sports, there is only one class. We had several undefeated seasons, only to come in second or third in the sectional that Penn and the South Bend schools usually dominated. However, we had many girls make it to the state meet! Dayna Pellosma was a State Champion in the 100M in 1993 and Mandy Bodnar was State Runner-up in discus in 2002. Mandy went on to have a full scholarship at Purdue for track and field. Paige Balka was probably one of the most talented track athletes I ever coached! She advanced out of the Gary Regional in the 100M, 200M and Long Jump! If you look at the LaVille yearbooks for the 1980s, 1990s and 2000s, LaVille won many NSC, Marshall County, Lancer Relays and set several records at the Goshen Relays.  We began and started every meet with this team chant: “Rip Roaring Fun Times . . . Run Lancers Run!”

Jodi Kayser, a 1996 LaVille High School graduate, was a member of the track team.  Kayser returned to LaVille to teach in the Social Studies Department along side her former teacher and coach.

“I was on the track team all four years in high school, although I never earned enough points to letter . . . not the best athlete,” said Kayser.  “But Lee never made me feel like I wasn’t part of the team.  I always felt just as valued as the best runners.  That’s probably why I kept coming out each year.  Track was always a blast and that was because of Coach Dennie, who we affectionately called “General Lee.”  Kayser (then known as Jodi McEndarfer in high school) proudly said that, “Lee did give me a varsity letter my senior year.  He wouldn’t let me graduate without one since I came out all 4 years.  I still have my “pity letter,” as I called it.”

“I ran for Lee in the mid-90s,” explained Ecker, a 1997 LaVille High School graduate.  “I was the distance girl, running the mile, 2-mile, and the 2-mile relay. Dennie was a great coach, and maybe even a better recruiter. You couldn’t pass him in the hall without overhearing, “You should run track,” and of course, everyone liked him so most of them did. We had fantastic teams, and while a big part of it was talent it definitely helped to also have depth.

“We won several big meets, County, Lancer Relays, NSC, it was so much fun.” continued Ecker about her time on the track team.  “He was a great motivator too, the 2 mile is a late race in the meet line up, and he always had the managers reporting back to him and he always knew the score and I knew when I saw him before my race we needed my points. He was always positive and would say you need to beat the girls on this team or that team or we need you to get at least third. Being a lonely miler it really solidified my role on the team and my understanding of how even though each event is individual, each part is an equally important part of the whole.”

Ecker also confirmed that the girls knew the stars were lined correctly when Coach Dennie got excited: “We always knew we were in good shape when we heard his “Yeee-Haw!”

Ecker still has fond memories of her time as a student-athlete.

“During my post high school runs there were probably a million times when I thought about him and other coaches and how lucky I was to have grown up under such phenomenal leadership,” concluded Ecker.  “I was given so many tools to take care of myself physically and mentally. I hope that as a coach I will have a similar impact. I went up to my classroom a few weeks ago and on a table I found a surprise he had left for me. One was a trophy from one of the teams I was on; the second was a sign that he had in the hallway. It was our team cheer, “Rip Roaring Fun Times Run Lancers, Run!”

Dennie loved teaching and coaching at LaVille, and LaVille loved Dennie in return.