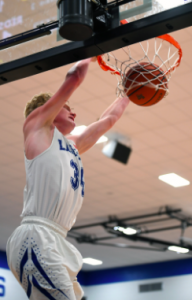 Today, we continue our look back at the 2019-2020 LaVille Basketball season with Austin Dove. 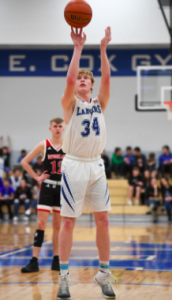 First talk about the 2019-2020 LaVille Basketball team and the accomplishments for the Lancers considering LHS graduated several key players and more than 75% of the team scoring.

“As many of the people who follow LaVille Boys Basketball know, last season we graduated a very skilled senior class. This class included Luke Beehler, Riley Cox, Jared Beehler, and Riley Wagoner. We lose skilled players every year but it makes way for the other guys to step up and fill those roles. When juniors become seniors they no longer have the older players leading and are forced to start acting as leaders and this allows them to play with more confidence. This added confidence, along with Coach Edison’s ability to make the most of whatever players he has, helps to combat the negative effect of losing seniors each year. I believe going into the 2019-2020 season a lot of people had their doubts of how good we were going to be. They saw that we lost 75% of our scoring and wondered how we were going to make up for it. I believe by the end of the season the fans figured out that we were different then past LaVille teams. This team was special because in the past boys basketball depended on one or two guys for the points, but we had 5 guys on the floor who were all capable of having a good game if one of the others were having an off night. Also if the shots weren’t falling in the first half we had a tendency of playing really good half court defense which helped keep the other teams score low while our shooters would try to find their shot.” 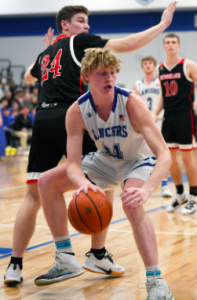 Talk about the Saturday night sectional championship victory over South Central (Union Mills) and how you felt to help lead the Lancers to the first sectional since 2015?

“During the regular season the goal is of course to win but there is always more emphasis on the tournament games. We had some losses during the regular season but most of them were close and we knew we had a good chance of winning sectionals if we were able to play like we knew we could. It was a bit nerve-wracking because we knew each game could be our last, but we just took it one game at a time and did not get too ahead of ourselves. After winning the championship game on Saturday I got this feeling of relief and excitement. The relief came from knowing all of the hard practices and preparation paid off and the excitement came from being rewarded because of it.” 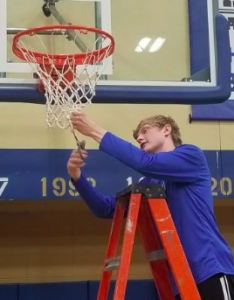 “We knew that Bowman Academy was a very talented team, however, we kept Coach Edison’s advice in mind that it only takes one game. You don’t have to be the best team in the state to progress in the tournament, just the best team on that night. I wasn’t able to practice the week leading up to the regional game but I could see in each and everyone one of my teammates eyes that they were hungry and eager to show everyone that we could win despite the odds. So they practiced hard all week long working on things to prepare for Bowman. They did this because they knew that if we played our best and they didn’t we could win. Also being the underdogs that are not expected to win fuels you to prove the predictions wrong.” 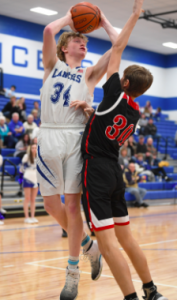 “The news of the games being played with a limited amount of fans was not too bad since there would still be a considerable amount, but it was unfortunate that all of the people that wanted to watch would not be able to. Then the postponement of the tournament raised a lot of questions that lead to the likely possibility that it would just be cancelled completely. I thought that maybe my elbow would have time to heal and I would be able to play in the regional game after all. So there was a potentially positive aspect to it for me. Once the tournament was announced as cancelled, it was difficult to accept that all of our preparation for regionals would not be put to use. But it was even more difficult to accept that our season was over and that we would never play another game together as a high school basketball team. It was a great season though and there are a lot of good takeaways in spite of the abrupt ending.” 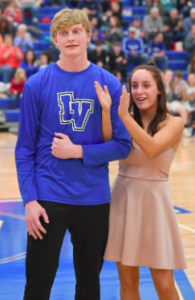 “I played basketball from 7th grade to 10th grade and then took my junior year off and made my return to basketball senior year. Senior year was the most important year in my basketball career because I was the top dog along with the other three seniors for the first time. This was a change for me because in the past I always had someone to look up to and tell me what to do. I know now that the underclassmen have a bright future ahead of them because what I’ve been through they are going through and still have to go through which will only make them better. It’s hard to say thank you for so many things, but thank you for everything to my coaches, teammates, and fans for making my basketball career the best it could be.”