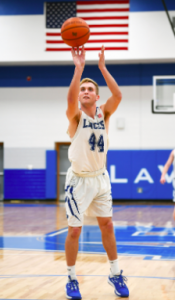 LAKEVILLE, IN. – After nominations from winter head coaches, and an open vote on www.lavilleathletics.com, basketball player Jimmy Fischer and Cheer Member Siyara DeLaurelle have been selected February Athlete of the Month.

Fischer received 89% of the vote, while wrestler Caleb Tolbert got 11%.

“This season was great for my team and for myself,” said Fischer of the 2019-2020 basketball season.  “I don’t think I reached my potential as a player but I do believe I improved a lot over the course of the season. Our team was difficult to beat because we had five different guys who could score 8-14 points every night.”

Fischer went from more of a role player during the 2018-19 season to being among the starting five during the 2019-2020 season.  The Lancers defeated South Central (Union Mills) to win the Indiana High School Athletic Association Class 2A North Judson-San Pierre basketball sectional.

“It means a lot,” Fischer said when asked about being nominated for athlete of the month consideration.  “I feel honored to be recognized for my effort and I was thankful to be nominated, let alone win.”

According to Fischer, being a student-athlete at LaVille has been a special time for him.

Sports have given me relationships I will have forever,” explained Fischer. “Friends have become family, and coaches have become mentors. Athletics have taught me that with hard work, anything is possible.

“Our team this year was definitely my favorite,” continued Fischer.  “We all are close and so competitive, it was a fun season. I have also been blessed with great coaches in all the sports I play, and I am thankful that they have pushed me to become a better athlete and person.” 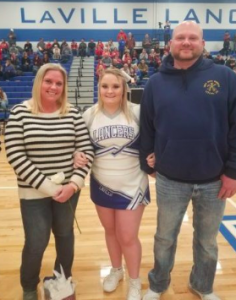 DeLaurelle recorded 77% of the female vote.  Basketball player Natalie Gonzalez earned 23%.
“Personally, I learned a lot and developed more skills as a base and working with different bases for different stunts,” said DeLaurelle, who was recently selected a Universal Cheer Association (UCA) All-Ameican Team member.

DeLaurelle had the chance to join over 1,000 UCA members on a tour and cheer performance in London.

DeLaurelle is a part of the LaVille High School Cheer Crew.  LaVille High School Cheer held a UCA camp for three days during the summer.  On the last day of the camp, any of the 12 girls that attended the camp could try out to be considered for the UCA All-American Team. “Everyone is willing to try different spots which continues to allow our team try a lot of new things.”

A total of eight girls tried out and four were selected to the UCA team based on showmanship, poise, technique or ability to lead a crowd.
“It means a lot that I was nominated by my coach because she never fails to make sure each of us on the team feel that we are appreciated and very welcomed on her team,” said DeLaurelle.  “It just gives you a reminder that you are doing good.
“My role on the team is a base and that is where my skills show the greatest and it ensures that our stunts will be safe,” continued DeLaurelle.  “It takes a lot more than just holding a foot up in the air or standing on peoples hand, everyone has to communicate and have proper grips and technique. Each person plays a very different yet crucial role in each stunt.  Since the day that Coach Kelsey was hired she has had the goal of having our team compete.”
Sep
25