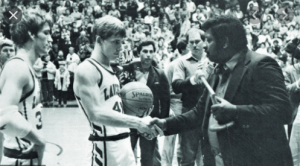 LAKEVILLE, IN. – With the 2020 Indiana High School Athletic Association Class 2A basketball sectional title safely in the hands of Lancer Nation, www.lavilleathletics.com takes a look down memory lane into Lancer Basketball in the 1980s.

We continue the ‘The Tradition Continues’ series with a look at LaVille Basketball in the 1980s.  This series will take a look at present and past moments in LaVille History.

Prior to Edison’s turn around story, a look back in the archives of LaVille Basketball finds a successful run by the Lancers during the Larry Radecki era.  Radecki won 210 games during a 17 year stint and sectional titles in 1985 and 1986.  That 1985 crown was the first since LaVille cut the nets in 1968.

“LaVille basketball in the late 70’s & 80’s was amazing,” said 1985 graduate Troy Gurtner.  “We had so many talented teams with great records, but the area competition was so good during that time frame that we could never quite win sectionals or Bi-County. Plymouth won the state in 1982 and Argos was a state runner-up in 1979. John Glenn also had great teams during that time period and all 3 of these schools were in our sectional every year.”

Gurtner finished his career with 919 points and helped the 1984-85 Lancers to an IHSAA basketball sectional title, the first in a 16-year span.  Gurtner was a 6-foot-1 guard for Radecki’s club and the leading scorer.

“Coach Radecki was tough, disciplined, passionate, intelligent, expected everything and 100 % commitment from his players,” Gurtner said of Radecki.  “He was Bob Knight Jr. lol. And with all those characteristics, I have nothing but the highest regards and highest respect for coach, and can only thank him for life-long lessons that he taught me. The amount of discipline, hard work, and attention for detail he demanded translates into the real world as I look back on things. What really makes my heart full (being a Lancer my entire life), as I was able to set back and watch my own son (Cam) experience so many of these same life lessons as he played for Coach Edison. We both were very fortunate to play for such great people and mentors.”

According to Gurtner, the life lessons that Radecki taught started during practice.

“Practices for coach were extremely tough,” said Gurtner.  “It was all business when you stepped on the floor. I recall as the seasons would kick off before the games started, we would practice before school and after school. I’m pretty old school, so I look back on all that and none of it bothered me. Coach loved defense! I for sure remember way more defensive drills during practice than offense. That being said; the community and opposing teams often gave us the identity of a “slow down” team. So wrong, we averaged like 61 points per game (with no 3 point line) my senior year. I’m pretty sure that ties for the highest points per game in a long time. Coach did whatever it took to WIN.”

Gurtner’s memory serves correct, as the 1984-85 LaVille basketball team scored 1,512 points in 25 games, good for a 60.48 offensive average. The Lancers scored 60 or more points 13 times, including a season-high 81 points in an 81-77 four overtime victory at Northridge.  LaVille went 12-1 in games where the offense scored 60 or more points, losing only 77-64 at John Glenn during the regular season.

The 1984-85 season was special for Gurtner and his Lancer teammates in a multitude of ways.

LaVille started the season 9-0 before dropping a tough loss to Concord.  Gurtner explains that some minor mid-season injuries proved only to be a speed bump as LHS finished the regular season strong en route to the sectional championship.

“Winning the sectional my senior year is an experience I will never forget,” recalled Gurtner.  “It was a huge build-up being the first sectional win in such a long time. I recall the huge hype and having the opportunity to play at North Side Gym in front of a packed house. This was prior to class basketball, so we played Concord who had beaten us earlier in the regular season. They had Shawn Kemp (future NBA) as their 6-foot-10 stud. We beat them soundly in the regional semi-finals. Our “reward” for that win , with no class basketball, was to play the defending state champs Warsaw who had Rick Fox ( future NBA) and Jeff Grose ( Indiana Mr. Basketball and Northwestern standout). We battled them tough most of the game but eventually their superior talent took over and I think we lost by 13.

“We started out the season 9-0, then were beaten by Concord,” Gurtner continued of the start of the regular season.  “We suffered a few minor injury setbacks in the middle of the season that led to a couple more losses. As the season progressed, we got healthy again and were able to gel and start playing our best basketball prior to the state tournament. We were able to take that momentum into the sectionals and “upset” John Glenn in the sectional finals after Glenn had previously beaten us twice earlier in the season. They beat us bad in the regular season and also in the finals of the TCU Bi-County tourney. They were a very talented team. When I look back on that season, I realize we had tremendous success while playing a crazy difficult schedule for the size of school we were. We played in the always competitive Northern State Conference along with non-conference games with Plymouth, Concord, Mishawaka Marion, S.B. St. Joseph, Northwood, Northridge to name a few.”

Gurtner may have been the leading scorer for that 1984-85 Lancer team, but credits a talented group of teammates for the team success.

“I was so fortunate to play with awesome teammates,” said Gurtner.  “As I think back, I believe the one thing that led us to the success we had was the old quote you hear: “there is no “I” in “TEAM”. That was so true with the players we had. Pat Adkins was a year below me and was an extremely talented player and ended up playing college ball at Bethel. We had Kirk Snyder, Daryl Zartman (our 6’2” center lol), Mike Sauer, and Dave Herbster. All these guys were great teammates. Never do I remember any controversy or drama about who was shooting too much and all those kinds of things that can bring a team down. All we did was work hard and win games!!”

LaVille advanced to the championship game of the TCU Bi-County basketball tournament during that 1984-85 season before the Lancers lost to John Glenn in the finals.  The TCU Bi-County also holds a special place in Gurtner’s heart.

“The TCU Bi-County tournament (as it continues to be) was the tournament of all tournaments,” concluded Gurtner. “Playing in a packed “Cox Box” was another experience I will never forget. Unfortunately, none of coach Radecki’s talented teams in this era were able to pull out a championship. The Bi-County is such a great tradition in northern Indiana, hopefully this tournament will continue on way past my time.”