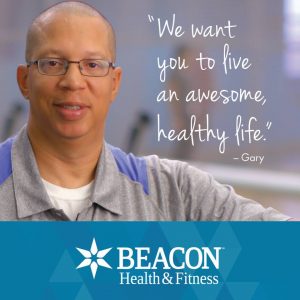 LAKEVILLE, IN. – March is National Athletic Trainer’s Month and the Union North-United School Corporation continues to have a solid relationship between Beacon Health System and the student-athletes of LaVille Jr.-Sr. High School.

This month we would like to recognize LaVille athletic trainer Gary Hall who is in his 30th year as an athletic trainer.  Hall continues to care for the student-athlete six days a week and approximately 11 months a year.

“Gary and I came to LaVille about the same time,” said LaVille Softball coach Scot Shearer.  “Gary always has the student-athletes best in mind when he cares for them.  He crosses paths with our junior high and high school athletic teams and is phenomenal in working with each one.  Gary has also been here to care for injured players from the opposing team whether we are hosting a regular season contest or the different levels that LaVille hosts on behalf of the Indiana High School Athletic Association.  He cares for all student-athletes like he would care for his own child.  Gary is not only a great athletic trainer, but a great friend as well.  He is one of the best in the business!”

Prior to coming to LaVille, Hall served as an athletic trainer for a couple minor league hockey teams.

“I’ve seen a lot of interesting injuries in my years as an athletic trainer for a hockey team, including

Hyphema( blood in the anterior chamber of the eye),” recalled Hall of his days with the Nashville Knights, Atlanta Knights, and Fort Wayne Komets.  “A player was hit in the eye with a puck. He had to lie flat on his back for a week for the body to reabsorb the blood.

“I’ve also seen a fracture / dislocation of the lower jaw,” continued Hall, referring to his days as an athletic trainer for the minor league hockey teams.  “He was cross checked in the face with a hockey stick. He had surgery the next day and was on the ice again three days post injury. The equipment manager and myself created a face mask that attached to the hockey helmet so he could play.  I’ve seen a fractured orbit (eye socket) from a fight.  Again, player only missed a few days on the ice post surgery.”

During his time with the hockey feeder programs for Tampa Bay Lightning and Florida Panthers, Hall has run the gamut on dealing with injuries.

“Ruptured testicle in a goalie,” recalled Hall, who has also served as an athletic trainer for the North Team at the 2014 Indiana Coaches of Girls Sports Association North-South Softball All-Star game in Carmel, Indiana. “He went down to block the puck and it took a funny skip off the ice and went underneath his cup rupturing his testicle.  I’ve dealt with multiple lacerations, including myself. My very first game in hockey, a puck was deflected and hit me in the mouth. Also at practice once, another deflection hit me in the forehead. Both required stitches! Another player fell forward as he was checked from behind and fell onto a skate blade causing a severe laceration requiring 144 stitches. Again, he was back on the ice skating in 4 days and playing in a week!”

From the blister and cut that takes a simple band aide to a life-threatening situation during football season in his early years at LaVille, Hall has also seen plenty roaming the sidelines for Lancer Athletics.

“I’d say I work between 75-100 games per year depending on the year and whether we host sectionals where I’m at every game,” said the graduate of Baker High School in Fairborn, Ohio.

When asked what was the most typical type of injury he sees from season to season, Hall responded: “Depends on the sport. I’d say football is concussions, knee and shoulder injuries.  In girls and boys soccer it is concussions and knee and ankle sprains. Basketball is ankle sprains mostly.

“Baseball and softball would be shoulder injuries,” continued Hall.  “Wrestling is concussion, knee and ankle sprains.  Tennis is shoulder and ankle injuries, and in track, lower leg injuries including hip flexor injuries, and shin splints and other hip injuries.”

According to Hall, he enjoys college football and basketball, softball, and pro hockey.

“At LaVille I’d say enjoy watching all the sports because I want to see all of our athletes succeed and enjoy watching them participate,” Hall said of being a part of Lancer Athletics for going on his 17th year.  “The rewarding part is trying to make a difference in kids lives and seeing them grow from kids as junior high athletes to young men and women.  When they are seniors and then years later when they’ve been out of high school and come back to see you and they have families. It’s been a great 17 years at LaVille and look forward to continuing to cheer on and take care of our athletes at Lancer Nation.”

“Gary is an amazing person with a heart of gold for others,” said LaVille Head Boys Basketball coach Michael Edison.  “He has been a tremendous help to me personally with the boys’ basketball team as well as all the other student-athletes and their coaches.

“As a school, we are very blessed to have someone with the expertise and knowledge that Gary possesses,” continued Edison.  “He is extremely dedicated to the student-athletes at our school and he spends so much time working to make sure they get the best care possible.  It feels as though Gary is here at the school 24 hours a day as I see him working diligently at all hours of the day & night!”

Hall continues to not only care for LaVille student-athletes, but is involved with Beacon Health System in a variety of ways.

“At Beacon now with this covid-19 (coronavirus), athletic trainers are on the front lines at the hospital entrances screening patients and visitors for virus symptoms,” said Hall of the time now since school is out of session.  “And we also work various other sports events like lacrosse, and volleyball.

LaVille and Edwardsburg High School in Michigan, along with Holy Cross College and IU South Bend) so, yes spring is busy working all these physical and jetting out to our event at our own schools. All of our athletic trainers really support each other and cover for each other. It’s a great group of people to work with.”