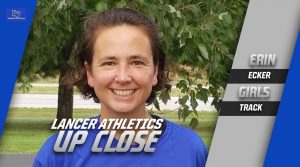 LAKEVILLE, IN. – LaVille Athletics would like to take this opportunity to take an “UP CLOSE” look at our high school head coaches.  We continue our series with LaVille Girls Track Coach Erin Ecker

I graduated from LaVille High School in 1997.

I played soccer (striker and midfield) and softball  (third base). I also played baseball my freshman and sophomore year (left field) and ran track.  I ran the mile, 2-mile, and 2-mile relay.  I also participated in cross country and was a forward on the basketball team.

I then went on to Purdue and Western Governors University.  I played intermural softball and basketball and earned my degree in elementary education.

I find that relationships are important for starters. When you are a teacher kids have to be in your class, when a kid calls you coach, they are there because they choose to be.  I love watching the kids grow up and mature, sometimes just in a single season when what you have been practicing just clicks, and then seeing that love of the sport and self-confidence carry over is always awesome to be a part of.  I’m very competitive so even when I was coaching young kids in soccer it was so rewarding to put kids where they have natural talent and get them to work together and win some big games. From those wins you see the respect for one another and that sense of team become part of their identity, it is very surreal.  I had great coaches, Coach McCullough and Coach Dennie were amazing. There were so many times as a young adult that I thought of them and was thankful for what I learned from them, I hope I have that impact on some of the young people I’ve coached.

Interesting fact:  I’ve coached against one of my former Cross Country coaches at sectionals, Coach Riviera, and Coach Krom another of my old cross country coaches showed up to a meet this year to watch me coach cross country. I asked if he had a grandchild on one of the opposing teams and he told me he had been following my teams the last few years in the newspaper and he wanted to get out and see my team and me. That was a really neat moment.

I still get butterflies every single meet! You would think I was waiting for the starting gun.