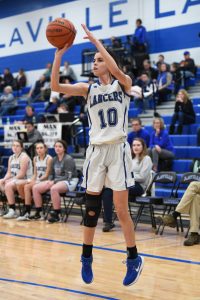 LAKEVILLE, IN. – After nominations from winter head coaches, and an open vote on www.lavilleathletics.com, basketball player Trynitie Cox and basketball player Connor Wieczorek have been selected January Athlete of the Month.

Cox received 51% of the vote, while teammate Natalie Gonzalez got 49%.

“I think the players responded fairly well to the new coach and offense, it was a little rough at first but as the season went on and as we got familiar with our coach and offense,” continued Cox.  “It means a lot to me knowing my coach nominated me for athlete of the month because it shows that I stuck out and was doing good things for my team.  To receive athlete of the month means a lot to me as well because that also shows that I stuck out not only to my coach and teammates but to the community and people watching our games as well.  Knowing the community watches me and voted me to be athlete of the month makes me proud to be a Lancer and compete not only on the basketball team but also for the other two sports I am in. 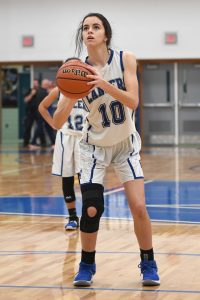 Cox says that athletics mean a lot to her and that she enjoys playing for the school and community.

“Participating in athletics at LaVille has meant a lot to me,” concluded Cox.  “I love being able to play for LaVille and having my name being known around the community.  I feel as if it an honor to my family and I knowing the community knows me and nominates me for such an award.” 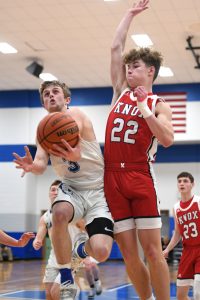 Wieczorek received 59% of the male vote, edging out wrestler Paul DeWitt with 41%.

“Basketball is going good this year,” said Wieczorek.  “We are doing better than I expected; probably better than most people expected. Personally I’ve gotten better in some aspects but coach preaches to never to be satisfied

“I think the team is playing well, all around we just work well together and really accept the roles we play,” continued Wieczorek.  “We have flashes of our true potential but hopefully we show our true colors during sectionals.”

Wieczorek appreciates being nominated for athlete of the month by coach Edison. 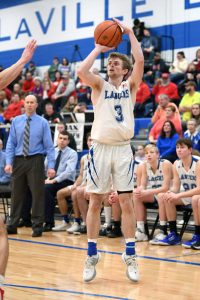 “Playing sports in high school really defined it all for me,” Wieczorek said.  “I made so many friends and learned so many lessons that’ll last a lifetime.  I want to thank my family and friends for voting for me, my family definitely took advantage of being able to vote more than once so I can’t thank them enough.”

Cox was the top rebounder for LaVille Lady Hoops, along with the top shot blocker.  Cox averaged 5.6 points per game, which led the team in scoring average.

Wieczorek leads the team in assists and steals, along with the second leading scorer for the 15-6 Lancers.  Wieczorek helped lead LaVille to a third straight Hoosier North Athletic Conference Championship in 2019-2020.