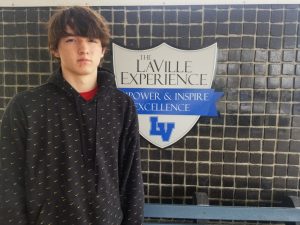 Some may say congratulations and that is quite an accomplishment.

For Caleb, it is quite an accomplishment considering a couple of factors.

You see Caleb spent the preseason thinking about if he wanted to play basketball or wrestle.

He decided on wrestling.

Then once wrestling got started, he wanted to quit.

Then one of his teammates got in his ear, 120-pounder Conner Deason, talked to Caleb. Conner told him to hang in there. Stick it out.

“At the beginning of season I wanted to quit,” admitted Tolbert.  “Conner Deason told me to stay.  Follow through with this. I thought it was too hard. I didn’t like it.”

Tolbert not only stayed, but also worked his way to a 182-pound weight class Hoosier North Athletic Conference championship.

“Caleb has improved a lot over the course of this season,” said LaVille Wrestling coach Dylan Shumaker.  “He has put in a lot of hard work which has helped him win a conference title at 182-pounds.  Caleb is peaking at the right time.”

Following the HNAC Championships at Triton High School back on January 24, the IHSAA state tournament picked up.

The sectional round was held at Plymouth High School and Tolbert was the #3-seed in the 182-pound weight class.

Tolbert started the sectional off with a pair of pins.  Caleb stuck Kevin Bailey at the 2:50 mark of his opening match, then pinned Bazle Owens of Tippecanoe Valley in 1:41 to advance to the sectional finals.

Tolbert’s sectional championship opponent would be Brandon Estepp of Warsaw.

The sectional finals are a bit different, according to Tolbert.

“It was kind of scary,” said Tolbert.  “When you get to final round you are under a lights. It was nerve wrecking. I think I could of done better.  I was heavy on my feet and I got tired really quick.  But I learned to wrestle hard and be smart.”

Tolbert would wrestle hard but come up short to earn a sectional runner-up finish.

“Tolbert’s second place at the Plymouth Sectional was a very satisfying finish,” said Shumaker.   “He went in as the third seed and pinned the second seed kid in the first period.  Caleb’s hard work paid off in the sectional.”

Being a second-seed from the Plymouth Sectional, Tolbert would face the third-seeded wrestler from the Mishawaka Sectional in the first round.

Tolbert went in focused in his opener and picked up a 10-4 decision over Chykeem Crawford of South Bend Adams.

“I wrestled sloppy,” admitted Tolbert. “I didn’t wrestle as hard as I could. I should have taken it more seriously.  I was also heavy on my feet in my first match.”

Tolbert’s next opponent would be the number one ranked wrestler in the state in the 182-pound weight class – Joe Walker of Mishawaka.

“Caleb advanced to the Penn Regional where we would wrestle a third-place finisher in the Mishawaka Sectional,” said Shumaker.  “Caleb won his first match at the regional and then faced the number one ranked 182-pounder, Joe Walker, from Mishawaka.  Tolbert finished fourth at the Penn Regional.  The coaching staff was pleased with his performance.”

According to Tolbert, “Walker was really good. I was trying to touch his leg and trying to last as long as I could.”

In the third place match, Tolbert got another crack at Estepp of Warsaw, but Estepp picked up the win.  That third-place match however, got Tolbert through to the East Chicago Semi-State.

“Caleb advancing to the East Chicago Central Semi-State is a great achievement,” said Shumaker.  “The coaching staff and myself believed that he would be our wild card and make a long run in the state wrestling tournament.  With all the work he has put in during the season it is paying off.”

Tolbert is proud of his effort so far during the 2020 IHSAA state wrestling tournament run.

“It feels pretty good,” said Tolbert about reaching the semi-state.  “I like it. I hate practices, but they make me better.”

Tolbert’s first round semi-state opponent will be West Lafayette’s Connor Barket.  Barket, also a sophomore, comes in with a 40-1 record and ranked fourth in the East Chicago Central Semi-State.

When asked about Tolbert’s first-round opponent Saturday, Shumaker said,  “As a coach there is nothing to really say about Caleb’s semi-state opponent.  We expect Connor to be tough.  At this point in the state tournament all of our opponents are going to be tough.  We have worked hard this week for these kinds of matches.  We are going to go battle and leave it all on the wrestling mat Saturday at East Chicago. The staff and myself are very pleased with Tolbert’s season so far.

“Caleb came to us during the preseason workouts and wasn’t sure if he was going to wrestle or play basketball,” continued Shumaker.  “We are glad we have him on our team He has worked hard for this opportunity to wrestle in the semi-state.  The coaching staff wishes him the best of luck Saturday.”

Parking: Fan Parking West and North lots near the football field – There is additional Fan Parking Available across the street at Carrie Gosch School  (Shuttle Service will be provided)

Seating: Fan Seating Available upstairs only. Handicapped seating, plus one escort will be available on the Main Floor.

*NO COOLERS, LARGE CONTAINERS, OUTSIDE FOOD OR DRINKS ARE ALLOWED IN THE EAST CHICAGO CENTRAL HIGH SCHOOL FACILITIES. FANS WILL BE ASKED TO RETURN THOSE ITEMS BACK TO THEIR CAR.

*NO PARKING ALONG YELLOW OR RED CURBS OR IN DESIGNATED HANDICAP SPACES WITHOUT PROPER
AUTHORIZATION/VIOLATORS WILL BE TOWED.

*NOISEMAKERS, BALLOONS, SIGNS, BANNERS AND/OR POSTERS, ETC ARE NOT PERMITTED IN OUR
VENUE DURING THE TOURNAMENT.