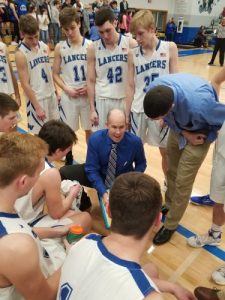 LIGONIER, IN. – One possession.  That’s what the LaVille at West Noble High School basketball game really came down to as the Lancers escaped Ligonier with a narrow 52-51 victory. It was the fifth straight victory following a 54-46 TCU Bi-County Semifinal Basketball loss to John Glenn.

Saturday, LaVille coach Michael Edison’s squad made just one more play than the host Chargers to pick up a crucial road victory.

“Its always good to see, when there is a close game, to see how we are able to handle it under that pressure,” said Edison. ” There is a different kind of pressure when it is close.”

LaVille was able to take a 24-16 lead after 24 minutes after five lead changes and two ties in the early going.  The Lancers were able to regain a 10-9 lead following a 3-point bucket at the 6:01 mark of the second quarter.  LaVille did outscore West Noble 14-7 over the final six minutes thanks in part to a 2-0f-7 shooting effort and three turnovers by the Chargers.  The Lancer hit 5-0f-7 field goals, including converting on three straight possessions to open the lead. 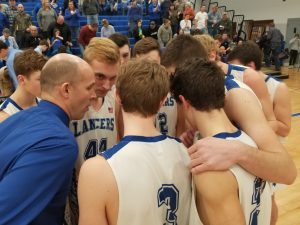 “Austin had some big, big blocks, big stops,” explained Edison.  “We had that little run right there in the second quarter where we were able to get some space. Bobby hit a three, Leyton hit a three and Connor got a nice pass from Austin to help us gain some momentum.  “We found a way.

West Noble did make a comeback late in the game, outscoring the Lakeville guests 22-14 in the final quarter. The Lancers opened the final eight minutes with a 38-29 lead.

West Noble’s Josh Gross started the comeback with a basket, followed 31-seeconds later Gross canned a pair of free throws to make it 38-33.  Good increased the ante to 40-33 when he converted a basket and was fouled.  On the Chargers next possession, Brandon Brewster converted an old-fashioned 3-point play to narrow LaVille’s lead to 40-36.

Over the next minute, West Noble outscored LaVille 5-0 to 42-41 following a 3-pointer from Joel Mast. 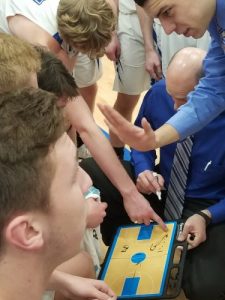 The Ligonier hosts took the lead after a LaVille foul send Austin Cripe to the foul line.  Cripe dropped both charity attempts and the hosts were up, 43-42 with 5:21 left.

The Lancers would tie the game when Wieczorek hit one of two free throws before Fischer hit one of those big shots that LaVille Coach Edison was talking about.  Fischer found his along the left baseline and kissed hit shot off the glass to make it 45-43 with 4:05 left.

After a LaVille foul Cripe was able to connect on a pair of free throws to tie the game once again at 45-45.

Fischer once again came through for the Lancers.  The LaVille post player worked his way around the West Noble defense knocked down a crucial shot and was fouled.  Fischer completed the charity toss and the Lancers were up three.

Cripe was fouled going to bucket and swished a pair of free throws to narrow the gap to one points with under three minutes to play.

LaVille’s lead would remain 50-49 until Leyton Czarnecki was fouled as he drove the right baseline.  Czarnecki dropped both attempts and the LHS lead increased to 52-49.

Following a West Noble timeout, the Lancer defense clamped down to limit any good 3-point looks for the Chargers, forcing Cripe to drive to the basket to narrow the score to 52-51 with under two seconds remaining. 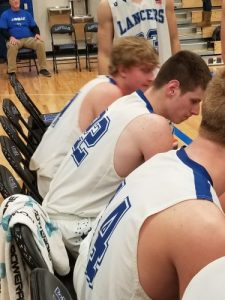 Brock Miller quickly fouled Wieczorek at the 0.9-second mark.  Wieczorek missed the first and Edison called a timeout to have Wieczorek try to miss the free throw attempt.  The LaVille guard was able to miss the shot, but unfortunately did not make contact with the rim.

West Noble got one last chance with 0.9-seconds to win the game.  An ensuing pass and a dribble later The Charger desperation half-court shot was off the mark for the thrilling LaVille victory.

“That shot he took at the end,” said Edison of West Noble’s final shot attempt.   “I thought oh geeze, don’t go in.

“I don’t know that we executed the best we could on every possession down the stretch, but we found a way to win,” continued Edison.   “We had some big, big scores when we needed them. Jimmy took the ball to hole, got fouled, one he finished. Bobby had one right there when we called a time out.  We missed some free throws and they missed some free throws.  We just had some guys step up and make some plays tonight when we needed them.  We were able to make one more play tonight than they were.  Maybe one possession, just one possession.”

Fischer was solid the entire night for LaVille.  The LaVille post player hit all seven shots from the field, including a much-needed 3-point basket to go with swishing his lone 3-point point attempt from just left of the key.  Fischer also went 4-of-5 from the free throw line for a career-high 19 points.

Good added 14 points and five boards.  Czarnecki chipped in with 10 points, including a couple big triples to help keep the Lancers in front.

LaVille improved to 12-5 overall and will travel to Triton February 14 for a crucial Hoosier North Athletic Conference game.  The JV is set to tip at 6 p.m., with the varsity to follow.