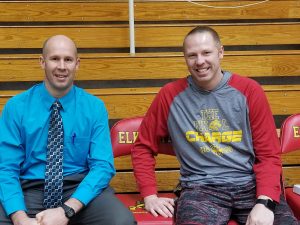 LAKEVILLE, IN. – The Bethel University graduate and Pilot head coach Mike Lightfoot coaching protégé train continues to run in the state of Indiana.

This year for the first time-ever, LaVille and Elkhart Memorial played a junior varsity-varsity boys basketball doubleheader at Elkhart’s North Side Gym.

Contracts run out between schools, schedules change, and new opportunities come about every so often.

That was the case over the last year as both LaVille and Elkhart Memorial had openings to fill on the boy’s basketball schedule.

When asked how this opportunity arose, Sears responded,  “It came about because we had some people drop us last year and we were looking for games.  We put some feelers out on the IHSAA email and Michael and LaVille reached out and said let’s work it out and we did.” 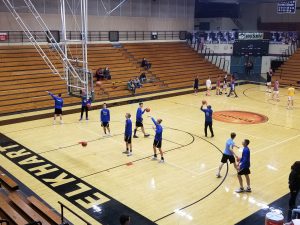 According to Sears, “It’s always fun when you see friends out on the road and playing games and different things. I think I’ve coached against five Bethel guys this year, which is kind of crazy. But this is the first time Michael and I have faced each other as head coaches.

“It’s always fun to be able to catch up and to be able to sit down and talk,” continued Sears. “You heard about (Michael) Edison the entire time I was at Bethel and I loved the example he set as a player and we learned from that. Just watching him as he coaches his teams, they are well coached and they play hard and every game you play is going to be a battle. It’s been kind of fun from afar watching them do their thing, as well.”

Edison, a 1999 graduate of Bethel, joked at first when asked about LaVille and Memorial playing each other.

“Kyle just got done saying, “We’d love to play them” and I don’t know if that’s the case,” smiled Edison as he sat on the visitor bench at North Side Gym. “I’m starting to have second thoughts. Is there any chance we could back out? There’s still time before tip-off.” 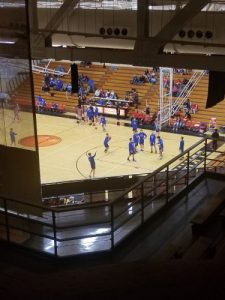 As both coaches laughed about Edison’s humorous way of keeping the moment light, Edison continued to talk about Elkhart Memorial and what Sears has been able to accomplish with the Crimson Chargers.

“He’s got a nice crew,” Edison said.  “He’s got a little bit of everything really. He’s got some shooters, some inside play, and they get after it. They are a fun team to watch when I’m not coaching against them.”

Edison also reminisced about watching Sears at Bethel during the middle 2000’s.

“Kyle and I are several years apart and I had the joy of watching Kyle after I was coaching and going and watching him play for Coach Lightfoot,” Edison said of Sears, who graduated from Bethel in 2006. “He was an amazing player and does a great job as a coach as well and the thing I really like about Kyle the most is not only way he coaches, but the way he mentor’s the guys and works with these guys and builds relationships with the guys on his team.”

Though there are several Bethel graduates that have become Indiana high school head boy’s basketball, according to Edison, Sears would be the first this year he has faced. 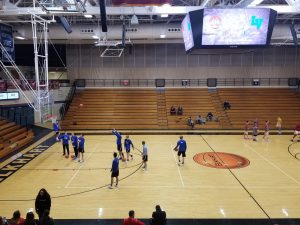 “Coach Lightfoot had told me a few years ago that all the boys head coaches but one in Marshall County was a Bethel guy,” explained Edison. “There are quite a few out there and I always like to see how guys are doing. I have a little vested interest in the Bethel coaching tree and how those guys are doing.”

Sears was quick to point out how LaVille has played since Edison has taken over the program.  “Thanks to Michael for having the game of the week (on WHME TV-46).  I got two chances to watch them play.  I was able to watch once Friday night and then again this morning (Saturday).  They attack the boards hard, they force defensive pressure and that reminds me of somebody …. Maybe him,” said Sears referencing Edison and his style of playing.

The LaVille-Elkhart Memorial game went back and forth much of Saturday nights, with Sears’ Chargers pulling off a 69-62 win.

“The game really came down to a couple of key possessions,” Edison said of Saturday’s game with Memorial. “It stretched out to about seven at the end basically because we were forced to foul.”

Wieczorek finished with 25 points to pace the Lancers, while Czarnecki – who suffered an ankle injury in the final fifteen seconds of the game – added a career-high 21 points. However, LaVille’s stating frontcourt finished with just 11 total points, d0 in part to the dominance inside of the 6-foot-5 Brandon Brooks.

The Wieczorek-Czarnecki combination kept the Lakeville guests within striking distance the entire night.  Memorial’s largest lead was just seven twice before either Wieczorek or Czarnecki drained a 3-pointer to keep things close.

In the end, the former Bethel graduates and current Indiana high school coaches shared one final handshake as both squads continue the second half of the 2019-2020 season.