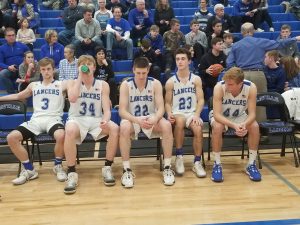 LAKEVILLE, IN. – LaVille head boy’s basketball coach Michael Edison just had a feeling that his team was ready to go when he saw them in the locker room and watched them warm up.

The Lancers proved him right as LaVille got off to a quick start en route to a 53-34 victory over Triton in the first round of the 55th Annual TCU Bi-County basketball tournament.

LaVille scored the first 11 points of the game as Andrew Dill, Jimmy Fischer, and Austin Dove helped get Edison’s crew off to a hot start.

That would continue for the entire first quarter as every LaVille starter got in the scoring column as the hosts bolted to a 24-4 lead after eight minutes.

“I think in the first quarter we had everybody on our team score,” correctly explained Edison. “It’s better to be on that end of things than the others things.  Most coaches that have been around a while that have had that happen to them it’s tough to battle out of the hole. 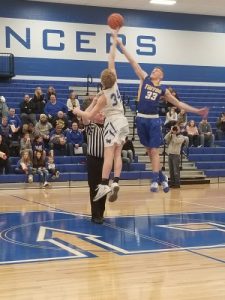 “We also have a lot of respect for Triton and knew they could,” continued Edison. “They are a gritty team, well-coached, but I thought our effort was very good. Played at a high level. We shot well, played defense well, rebounded strong, took care of the ball.  I thought everybody contributed and played well for us.”

Triton battled, outscoring LaVille 11-8 in the second quarter as Ashton Oviedo, Tyler Heckaman, and Keegan Westafer narrowed the early LaVille lead to 32-15 at the break.

Knowing they had 16 minutes to play and wanting to finish the strong start, Edison squad kept the pressure up in the second half and maintained a double-digit lead the remainder of the way to advance to Friday’s semifinal round against a solid John Glenn squad.

“It’s tougher to stop a team when you are equally distributed,” said Edison.  “I just was very pleased. The TCU Bi-County is a big deal. It quickly gets ingrained into you when you come here that you have to come ready to play or you are playing in the auxiliary gym.”