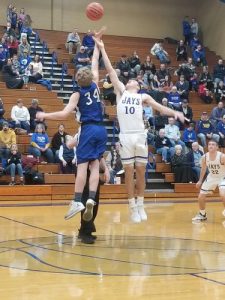 LAKEVILLE, IN. – It is a GAMEDAY Weekend For LaVille Basketball.

For the second time in the 2019-2020 season, the LaVille Lancer basketball team will play a Friday-Saturday doubleheader.  Back in December, LaVille went 1-1 on the first DH weekend of the season – a win at Pioneer, followed by a tough loss to John Glenn on a Saturday night.

Coach Michael Edison’s squad will play host to Hoosier North Athletic Conference leader Knox Friday, January 17.  It will be a part of a girl-boy varsity DH, with the ladies tipping at 6:30 p.m.  The guys will follow.

“Knox is a very hard-nosed basketball team,” said Edison.  “They play very physical and post up everyone from their guards to the post players.  They are very well rounded and play excellent defense.  They will be one of our toughest opponents up to this point in our season. 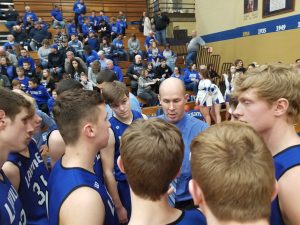 “Wagner, Taulbee, McIntire, Rose, and Short are their five starters and at any given point they are all capable of scoring,” continued Edison.  “McIntire is 6’4″ and is a nice post player for them.  Wagner is their point guard, but is their second best post player.  All of these guys can step out and hit the 3 pointer so they are very well rounded and can adapt to any situation.”

The Lancers are coming off a stinging 57-56 HNAC loss at North Judson-San Pierre.  The Lancers put three players in double-figures – Austin Dove had 16, Bobby Good 15, and Andrew Dill came off the bench to add 11 points.

“We didn’t shoot real well at different periods of the game,” said Edison of the NJSP game. “Some of our shooters were real aggressive.

“We couldn’t quite get over that hump,” Edison explained as his squad overcame a 0-for-8 start to rally in the final quarter.  “We had a lot of unforced turnovers. We played defense at times well and we might go an entire possession playing pretty good defense then someone breaks down and they get another possession. North Judson hit some big shots. We battled and had a chance at the end, but a lot of credit goes to them (North Judson).  Our guys battled.”

According to Edison Knox will play a hard-nosed man-to-man defense.  Won’t switch very much, but Knox will if they need to.  Know will also press at times, but their bread and butter is their solid half court defense.

“Interior post defense, which would include not getting in foul trouble and not allowing them to get to the foul line,” Edison says when asked about keys to a victory over the Redskins. “Also, with Knox being a physical team we will have to box out and rebound on each possession.  Lastly, we must make them work when we are on the offensive end force them to have to defend us.” 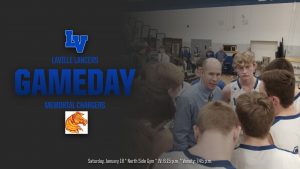 On Saturday, LaVille returns to North Side Gym in Elkhart for the first since the 1986 Elkhart Regional as the Lancers play Elkhart Memorial.  Back in the day of single-class basketball the Lancers won back-to-back sectional titles in 1985 and 1986.  LaVille is 1-2 in games played at NSG.  In 1985 the Lancers lost a thriller to Concord, 49-45.  Then, in 1986, LaVille beat the Minutemen 65-53 in the first round before dropping a 72-57 decision to Warsaw in the Elkhart Regional championship.

“Memorial is extremely athletic and play an extremely tough schedule,” said Edison of the Chargers.  “With the tough schedule comes a lot of battle tested players on their team.  They have one really good shooter in the Miller player and have several players that have a strong inside presence.

“Memorial likes to drive and their defense and pressing creates offensive opportunities for them,” Edison continued.  “They like to get up and down quickly and play at a fast pace.” 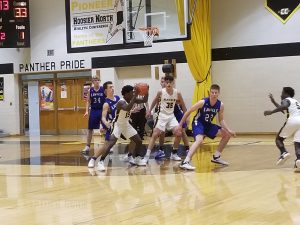 Though it has been a few years since playing at North Side Gym as a Plymouth High School player, Coach Edison is no stranger to NSG.

“My sophomore year we played at North Side Gym against a pretty good Memorial team,” recalled Edison.  “We were down by two points with about 1.5 seconds left.  They had the ball and were taking it out under our basket.  During a timeout my dad told us that they may throw the ball long and if that were the case we needed to try to box them out so that they could not touch it and therefore we would get it out under our own basket without any time being lost.  Memorial did throw it long and Mike Kershner boxed his man out and the ball went out of bounds just like we had thought could happen.  My dad then called another timeout and we ran an OBU play in which I got the ball passed in to me.  I would like to say that I was able to drain that shot and run off the court as the hero, but if I did I would be lying.  I got a shot at the top of the key for a 3 pointer and missed the shot right as the buzzer rang and the sting of defeat started to set in.

Looking back at that game it was neat to see our team fight back when we were down in the 4th quarter and to see my dad give us every opportunity to succeed with his coaching and intuition,” continued Edison.  “Sometimes teams fall a little short and that is exactly what happened to us on that particular night during the 1992-1993 season against Memorial.  Hopefully the Lancers are able to pull out a victory against the Chargers on Saturday night.”

Coach Edison knows this can be a special weekend for his squad, who is 3-1 in the friendly confines of Dale E. Cox Gymnasium and 2-2 on the road.

“We know this is going to be a very tough weekend,” said Edison.  “Knox is definitely one of the best teams in our conference and to have a chance at beating them we will have to play our best on Friday night.  At this point we are just focusing on them and are not looking ahead to our Saturday night opponent.

“Memorial does not deny in the passing lanes a whole lot, but they do pressure the basketball after it is caught,” Edison continued of Memorial. ” They play a man to man non-switching defense.  They will also press a decent amount.”

This is the first-ever meeting between LaVille and Elkhart Memorial.  The JV game will tip at 6:15 p.m., with the varsity game to follow.

Site: North Side Gym, Elkhart, IN.