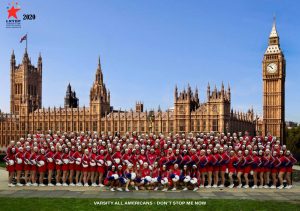 LAKEVILLE, IN. – LaVille cheer members had a unique opportunity during the Christmas break.

Senior Siyara DeLaurelle and sophomore Alexis Boettcher had the chance to join over 1,000 Universal Cheer Association (UCA) members on a tour and cheer performance in London.

A total of eight girls tried out and four were selected to the UCA team based on showmanship, poise, technique or ability to lead a crowd.

Boettcher and DeLaurelle, along with Allyson Maenhout, and Makayla Sheppard were selected to the UCA team.  During the process, each girl was informed of the need to raise $3,500 for airfare from Chicago, hotel, breakfast and dinner each day, along with several other touring opportunities. The group saw the musical ‘Wicked’, toured the Tower of London, The Crown of Jewels, Windsor Castle, and the cost included a ticket to the New Year’s Day Parade for the parent/guardian.

The group also had access to a guide that helped them along ‘The Tube”, which is London’s transit system. The London Underground is a public rapid transit system serving Greater London, England and some parts of the adjacent counties of Buckinghamshire, Essex and Hertfordshire in the United Kingdom. The Underground has its origins in the Metropolitan Railway, the world’s first underground passenger railway.  The group was led to such places like Big Ben and to learn more about Henry The VIII.

“During break over 1,100 UCA All-American Cheerleaders, including myself, traveled to London to participate in the famous London New Year’s Day Parade,” said DeLaurelle.  “The opportunity to represent my school and country while doing something I love was such an amazing experience. It was a very busy week but I got to experience so many things and visit places that I thought I would never get to see. We visited Windsor Castle, Buckingham Palace, the Tower of London, and many other famous sites. Coming from such a small school I never thought that I would be given an opportunity like this, and I am thankful for my family and coach for helping me get this far in my cheerleading career.”

Boettcher was also thankful for the opportunity and loved to perform, see the people and the sights.

“It was definitely an experience of a lifetime,” said Boettcher.  “It was fun because we had times to go on tours as a group, but other times we had free time.  I got to experience a lot of neat places like Buckingham Palace and Windsor Castle. I learned neat facts on the tours like how they drive on the left side to flow traffic easier.”

It also felt special to Boettcher to participate in London’s New Year’s Day Parade.  The London New Year’s Day Parade is an annual parade through the streets of the West End of London on January 1.  The parade first took place in 1987, as the Lord Mayor of Westminster’s Big Parade. The parade was renamed in 1994, and for 2000 only it was called the Millennium Parade.

“The parade was great!” said Boettcher.  “We didn’t have to get up super early. We practiced for about two hours and ate lunch and then we got in our lines for the parade.  We walked, chanted cheers, and then stopped and performed our routine.  It was AMAZING to perform in front of everyone and while walking people of all ages were waving, saying Happy New Year. It was just so exciting to see the little ones smile when we performed.  Also watching others perform was neat and everyone was just so happy and in a great mood.  The best part about the trip was meeting cheerleaders from all over and learning from their experiences and spending it with my mom.  I’m glad that I could take her on this trip because it was super fun and I wouldn’t want to spend it with anyone other than her.”

Amanda, Alexis’ mom, had a great time, as well.

“I thought it was amazing,” said Amanda, who is also a LaVille staff member. “For parents that could not go, each group had a guide.  The guide was responsible for checking us in and out each day to make sure things were going okay.  The guide was also responsible for taking us to different activities. We could go with the group or I could check the girls out and we could sightsee on our own.  It was organized very well.  New Years Eve night, the girls had dinner and they had a New Years party and dance.  It was neat because of the things the kids were able to see.  It was a great learning experience for the kids and to get to know the culture in London.”