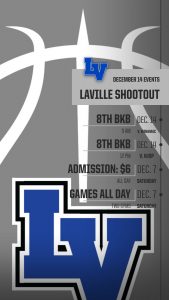 LAKEVILLE, IN. – The eighth grade basketball team will play host to its annual LaVille Shootout.

The event will be played on Saturday, December 14.

LaVille will open play at 9 a.m. against Winamac before closing the day at 12 p.m. against North Judson-San Pierre.  Both games will be played inside Dale E. Cox Gymnasium.

*The first named team will be the home team.