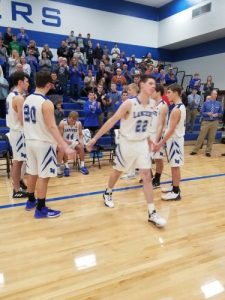 LAKEVILLE, IN. – It all boiled down to composure as the LaVille High School basketball team defeated Westville Wednesday night 71-52 at Dale E. Cox Gymnasium.

Lancer head coach Michael Edison was proud of the composure his team played with as he watched his team gain a double-figure lead and more than one occasion only to be tested by Westville grittiness.

Enter LaVille’s Bobby Good.  Good hit three crucial 3-point field goals during a four-minute stretch to give the Lancers an 18-11 lead.  That LaVille lead would balloon to 12 points when Austin Dove hit a put back with 1:17 remaining in the first quarter and LaVille on top 23-11.

Westville battled, striking back on a 12-7 run led by Jace Woods.  Woods would score nine of team-high 21 points in the second quarter to keep WHS within striking distance. A deep trey by Woods got Westville to within 35-28 at the half. 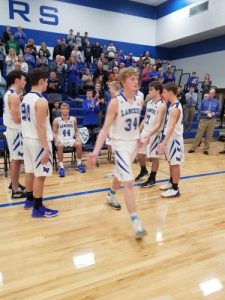 “I was pleased with our poise and composure,” said Edison.  “How they handled themselves and when Westville made some runs and we countered that.  They scored on three straight possessions and our guys huddled up. We got a key basket after that and that was something that we really needed.”

A huge second-half by Good and Connor Wieczorek helped LaVille stave off a couple different rallies.

LaVille led at one point 37-30, but another deep 3-pointer by Woods narrowed the gap to just four points – 34-30 – with 5:28 left in the third. But Good stepped up and hit crucial three-pointer, followed by a key field goal by Wieczorek, and Austin Dove found Good under the bucket for an easy lay up as LaVille showed its composure to go on a 10-0 run.

The Blackhawks tried to make one more run in the fourth quarter, getting the lead back to double figures, but LaVille once again showed its composure.

The Lancers played tough defense, got key stops and converted on a 16-3 run over a three-minute period to put the game away for LaVille. 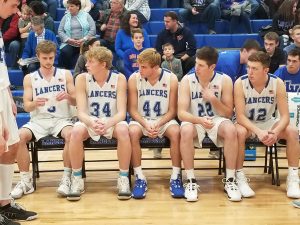 “Bobby has struggled with his hip, but he came through tonight with some 3-pointers and some put backs,” explained Edison.  “I thought a lot of our guys, Jimmy, Leyton, Connor just had some really good defense on Jace Woods.  Keeping him front with some nice angles.  He is a nice player and can put the ball in the hoop. Austin Dove had a double double and shot the ball well from the free throw line in the first half, gave us some big rebounds.  Connor taking care of the ball.  I was pleased with the effort by everyone.”

Good finished with a career-high 29 points on 12-of-15 shooting, including four triples.  Wieczorek, who converted on two drives to the basket and one opportunities finished with 15 points, including 13 in the second half.  Dove was tough around the boards all night long as he hauled down 16 rebounds to go with his 14 points.  Wieczorek also chipped in with five assists, while Dove finished off his solid effort with four assists and five steals.