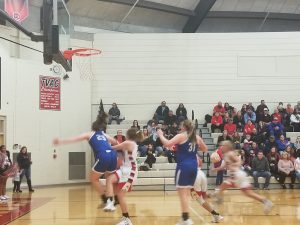 LAKEVILLE, IN. – LaVille Lady Hoops will play host to Elkhart Christian Academy in a varsity only game on November 26.

LaVille is coming off a 38-32 loss on November 23 inside Dale E. Cox Gymnasium.

LaVille struggled offensively early in the game, trailing much of the middle quarters by double figures before a fierce fourth-quarter rally. Six Lancer players got in the scoring column as the Lakeville hosts got to within two possessions in the final period.

Baskets by Lauren Dove, Lucy Sherk, and MaKenna Tribbey, to go with a pair of free throws by Madelyn Fuchs helped to narrow the LaVille deficit from 31-17 to 37-29. Natalie Gonzalez picked up a steal and lay up to make it 37-31 with less than 30 second lefts, but the Lancers simply ran out of time.

Kassi Watts scored seven of her career-high nine points in the first half to help keep LHS close. Sherk led the Lancers with nine rebounds.