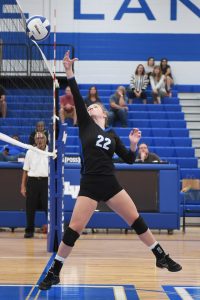 LAKEVILLE, IN. – After nominations from fall head coaches, and an open vote on www.lavilleathletics.com, volleyball player Sydney Coblentz and tennis player Zach Rutherford have been selected October Athlete of the Month.

“This years’ volleyball season was singlehandedly the best season I have seen in my years playing for LaVille’s Varsity team,” said Coblentz.  “This year was the first year since I have been in high school that the volleyball team has had a winning season. Starting off the year in the summer, we met our new coach Pat Gring, who was exceptional from the beginning, and she led us to have high hopes for the upcoming season.” 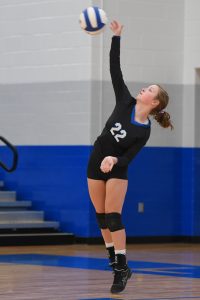 Not only did LaVille Volleyball have summer workouts, but also traveled to a team camp that was a crucial part of the team success.

“This year most of our team travelled to Ferris State University for a camp that focused on bringing us together as a team and improving our individual skills,” explained Coblentz.  “I think that after this camp, we had finally gotten a grip on the fact that our volleyball team was supposed to be more like a family and less like an organization. This volleyball team turned out to be like my biggest, most supportive extended family that I could ask for.

“Coach Pat was assisted by two of her wonderful daughters this year in coaching, and together they really made it feel like we were welcomed into their family with open arms,” continued Coblentz.  “It means so much to be even thought of for this award by my coach, because I tried my best to be both a team leader and a role model for the underclassmen, so to see that all of my hard work didn’t go unnoticed is amazing.”

According to Coblentz, this was her eighth year playing organized volleyball, and one that will leave the biggest imprint in her memory. 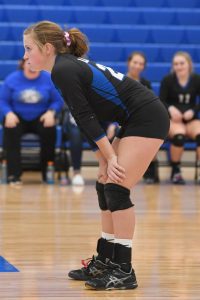 “I have made so many amazing memories with every girl on my team, and I especially bonded with our seniors this year,” concluded Coblentz.  “The girls all worked hard to become and act as one on the court, and I would have to say that I definitely had some of my biggest laughs with this 2019-2020 team. Participating in athletics at this school, though not just in volleyball, has brought me so many opportunities, and so many lifelong friends. Although my teammates are my best friends, I also have to thank my coaches and parents for continuously pushing me to achieve my best and for knowing that I can strive for bigger and better goals. I am so thankful to be the October Female Athlete of the Month!

Coblentz earned the team mental attitude award at the conclusion of the season.  She also was second on the team in aces and served at nearly 90% on 252 service attempts.

The 5-foot-4 junior was in the top five in defensive digs and compiled 214 setting assists while committing just 12 errors in 892 attempts.

Zach Rutherford edged football player Kolby Watts in the male athlete of the month voting.  Rutherford had 39%, while Watts collected 38% of the votes.  Cross Country runner Alex Menting, who finished as the team most valuable, had 23%.

“The tennis season was decent,” said Rutherford.  “We could have done better but the team went out and tried our best.  Our team lost all of our matches this season but we got close to winning on a few of the matches regardless of what is shown on the website due to it not showing how close a match was.”

Rutherford spent the season playing No.1 singles for LaVille.

“It means a lot to me that my coach nominated me and that I won the October Athlete of the Month,” said Rutherford.  “My experience with tennis has been nothing but positive with my teammates as well as my coach, I’ve learned so much from my coach about how to get better at tennis, and I always knew that if I wasn’t having a good day my coach would try to make it better, and the same during matches when we would be allowed to talk she would give me advice and tips on what I should be doing to get better.” 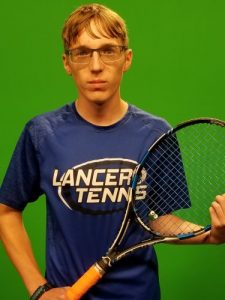 According to Rutherford, he has played tennis for four year and, “I’ve loved every season of it.”

Rutherford is happy he participated in athletics at LaVille.

“It has meant a lot to me because I’ve learned a lot from my coach and teammates even though we have a small team,” concluded Rutherford.  “No matter what happened during our season we all stuck together as a team and pushed our way through it, and I’ve learned how to deal with certain situations.  It’s the same as I said with my senior highlight, don’t be afraid to try out a sport you find interesting and don’t let what others think to affect what sport you play, if your happy with a certain sport, just play it and have fun.”