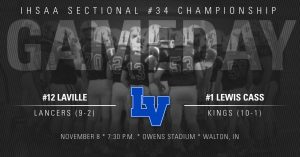 WALTON, IN. – When you reach the state tournament phase of the Indiana High School Athletic Association football tournament, each week is about survive and advance.

Each victory is a step closer to the ultimate goal of playing for a state championship in Lucas Oil Stadium come Thanksgiving Weekend in Indianapolis.

The LaVille football team’s next step is a chance to play for an IHSAA Sectional title.

Following a pair of home sectional victories, LaVille will travel to Class 2A #1 Lewis Cass Friday, November 8, at Owens Stadium. Kick is set for 7:30 p.m.

Lewis Cass, who opened the season by ending Pioneer’s 30-game winning streak with a 28-22 victory, has stumbled just once so far in 2019 – a 58-21 loss to West Lafayette. The Kings would avenge that loss a couple weeks later, 49-42.  So far during the 2019 IHSAA state tournament, Lewis Cass has excused the two-time Class 1A Panthers, 43-8, to open Sectional #34 play.  Then outscored Rochester, 53-9, in last Friday’s semifinals.

The Lancers have stopped first-time opponent Wabash 44-21 in the first round, while handling neighborhood rival Bremen, 34-14, in the semifinals.

This sets up a battle of two of Class 2A’s top 12 teams for a sectional title.

“They put on the pads the same as we do each Friday night,” said Hostrawser of the No.1-ranked Kings.  “No disrespect to ranked teams – but rankings are just an outsider’s estimation of ability – essentially an opinion.  Anything can happen to anyone on any given Friday night.  There will be one state champion at the end of week 15 – for those 16 schools remaining in the tournament, this is a step in getting there.”

LaVille will not back down, #1-ranking or not.

“It’s every teams goal to have this opportunity to play for a sectional championship – we are one of 16 teams in Class 2A to earn this opportunity,” explained Hostrawser.  “This is what our team has worked for and we look forward to it!

“This game will boil down to 2 things – who is able to execute their game plan more efficiently and who wants it more,” continued Hostrawser.  “I can guarantee one thing – we will show up and be ready to play.”

According to Hostrawser, Lewis-Cass runs both a modified Winged T style offense and a spread empty set.  They can run and throw it quite effectively.

On the defensive side, the Kings will run a Base 4-3 / 4-4 Defense with an outstanding crew of linebackers.

Not only will execution be an important element, but also so will field position, turnovers, and the controlling the line of scrimmage.

“As with every game we’ve played this year,” says Hostrawser.  “The line play on both sides of the ball will be key to success.”

LaVille will be looking for its second football sectional title in three years, while Lewis Cass tries to grab hold of the trophy for the first time since 2012.