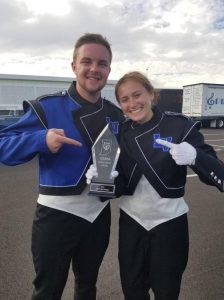 FRANKLIN, IN. – After being selected a Top 10 band at the Indiana State School Music Association (ISSMA) Regional, the LaVille Royal Regiment participated in the ISSMA Semi-State at Franklin High School, Franklin, Indiana.  A total of 20 bands performed in front of judges for the right to advance to the ISSMA State Final at Lucas Oil Stadium in Indianapolis on Saturday, Novemver 9.

While the Royal Regiment did not advance to the state finals, the experience of learning and improvment was well worth the opportunity to represent LaVille Jr.-Sr. High School.

“We were very grateful for the chance to participate in ISSMA marching band semi state,” said Royal Regiment Marching Band Director Nicholas Lieto.  “The results were not what we hoped for, but the kids did an amazing job and had stellar attitudes. We did not advance to the state level, but our score improved and we broke 60 which is big deal for us! We ended our season a whole 3 points higher than last year (that is a big deal in marching band land). Since we are so young to the activity, our focus right now isn’t to win trophies and placements but to simply work to improve our score. Every year we get better and better and every year we work to improve.” 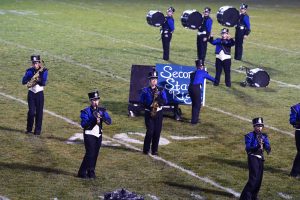 “I am beyond proud of my kids!” explained Lieto.  “They worked SO very hard this season and together we have made INCREDIBLE strides. They were so positive when we got down to Frankin HS. Our guides even commented on how much they were lifting each other up, even when staff and adults were not present. The bands from Southern Indiana are very intimidating because they are a little larger and this activity is prevalent in their school culture and is respected by the student body and all staff. The fact that they stepped off the buses and lifted each other up, even though we were the ABSOLUTE youngest band with the least experience there speaks volumes to their character. It’s amazing what positivity and pride in ALL school programs (fine arts, athletics, and academics) can do for a school and especially the students who attend it. Imagine if we ALL lifted each other the way my students did on saturday…how unstoppable we’d be… Our first (and DEFINITELY NOT LAST) trip to ISSMA semi state was an unforgettable experience that I will cherish my entire career. Thank you to my students and staff for making this season incredible.”