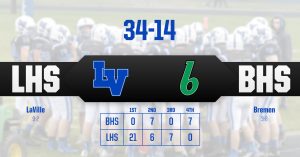 LAKEVILLE, IN. – Heading into Friday’s Class 2A Sectional #34 high school semifinal football game against Bremen, LaVille’s Andrew Dill knew he would get some touches.  Dill averages about six carries a game and about four receptions a game.

Dill did not imagine that the first three times he touched the ball would result in touchdowns to lead the Class 2A #12-ranked Lancers to a 34-14 victory over rival Bremen at Lancer Field.

“I thought we grabbed momentum on the opening kickoff return,” said LaVille head football coach Will Hostrawser.  “Kolby Watts made a couple guys miss then he ran over a defender.  That play really got us going.  From that point, we really played with a high amount of intensity.  That translated into points on the scoreboard for us.”

It was a special night for Dill, who opened LaVille’s scoring on a 29-yard touchdown reception from quarterback Ayden Doyle. Dill would score two more times in the first quarter and finish with 55 yards on five carries.

After LaVille’s defense forced Bremen to punt, Dill took the pitch from Doyle and scooted 34 yards to pay dirt on just his second touch.

“Andrew did a nice job setting up plays for us,” said Hostrawser.  “He has the ability to make a big play any time he touches the ball.”

His final first-quarter TD came on an eight-yard run that helped the Lakeville hosts to a 21-0 lead at the end of one quarter.  Dill also caught four passes for 59 yards to close the night with over 100 all-purpose yards.

“Each time we face Bremen in any sport – it’s a big game – state tournament or not,” said Hostrawser.  “Any time our schools get together, it’s going to be a battle because there’s pride on the line.  This week’s game is no different.”

Kolby Watts got in on the scoring act to put LaVille up 27-0.  Watts was on the receiving end of a 23-yard TD pass from Doyle. Watts looked bottled up as he took the one-yard forward pass, but wiggled his way free for the rest of yardage and raced toward the end one.

Watts put the scoring cap on for LaVille when he found the right edge of the line broke a tackle and raced 69 yards to the end zone.

Watts would finish the game with 136 yards on 14 carries and two scores.

Hunter Bennitt was on the receiving end of a six-yard TD pass from Ethan Nunemaker.

Bremen’s final score came when Lane Moser scooped up a muffed punt attempt and hustled 25 yards for the score.

“Beating a quality program like Bremen is always a challenge,” explained Hostrawser.  “If you beat them, it’s always earned.  Beating a team twice in the same season is a tall task.  It’s easy to get lost in the noise around a game such as this one – but I was proud of our guys for really dialing in their focus and playing hard. Earning the opportunity to play for a championship is always a goal.  I’m proud of our players for getting us into this position.  Now it’s time to take the next step.”

LaVille improves to 9-2 and will pay a visit to Class 2A #1-ranked Lewis Cass on November 8.  The Kings were a 53-9 winner over Rochester to set up the Sectional #34 title contest.

“Getting the opportunity to play the #1 ranked team is a great,” concluded Hostrawser.
“I wouldn’t want it any other way.  There are 16 teams left in the state tournament in our class and we all have the same opportunity – we have 48 minutes left to earn more.  To play this game takes an immense amount of time and dedication – it’s not for everyone.  Our guys have put in a lot of work to get to this point – I’m very proud of them for that – but there is still more to be done and the best thing is they all know it.”

Bremen, which closed the season at 3-8, was led by sophomore quarterback Ethan Nunemaker’s 116 yards passing on 12-of-19 attempts.  Bryce Wogoman toted the ball for 95 yards rushing.