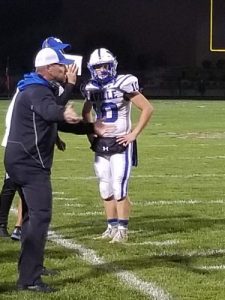 LAKEVILLE, IN. – The LaVille High School football team prepares for the Indiana High School Athletic Association state tournament semifinal round.  Class 2A #12 LaVille outscored Wabash for a 44-21 first round victory.  The Lancers advanced to the semifinals for the fourth straight year after missing out five consecutive times from 2009-2013.

With a win in the semfinal, Lewis Cass would either travel to Bremen or play host to LaVille on November 8.

LaVille would travel to Lewis Cass or play host to Rochester with a Lancer victory.

A Bremen win will put the Lions at home for the championship no matter what the outcome of the Lewis Cass-Rochester game.

Rochester, meanwhile, would hit the road to Lewis Cass or LaVille with a semifinal win.

Stay tuned to www.lavilleathletics.com for game results, scores and pairings.

Below find pairings, potential November 8 host sites based on November 1 results, sectional football championship titles by team, and chances of winning at each level based on information from John Harrell Football website.