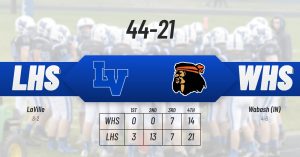 LAKEVILLE, IN. – LaVille High School football coach Will Hostrawser set the tone early when he decided to start the game with an onside kick.

From that moment on, it was quite apparent that Hostrawser had plenty of confidence in his defense to get the job done.

“We wanted to come out and take a chance right away – our defense had been playing well the weeks prior – and we thought it would be worth the risk,” said Hostrawser of the early-game strategy.  “We missed a tackle on the first play from scrimmage and gave up a big play allowing them to get into the red zone.  But our kids settled down and dug in – and holding them scoreless when they got into the red zone was big.”

And though the Class 2A Sectional #34 first round game against first-time opponent Wabash ended with the Class 2A #12 Lancers outscoring the visiting Apaches, 44-21, it was how the game got started that set the tone.

LaVille won the coin toss and Hostrawser opted to show off 17th-best defense in the state by deferring and going for the onside kick.

The ball didn’t quite go the necessary 10 yards, so Wabash got the ball at the LaVille 48.

Following a 31-yard run by standout running back Kellen Kelsheimer, the LaVille defense stiffened and forced what would be a missed 32-yard field goal.

LaVille’s offense then took over as the Lancers bolted down field.

A 27-yard pass completion from quarterback Ayden Doyle to Kolby Watts moved the ball to midfield.  Watts followed with runs of 12 and four yards before Doyle took what looked like nothing into a 16-yard scamper on a third-and-six.  That put LaVille in the red zone.

Though Wabash did tighten the belt defensively, LaVille came out with three on the board thanks to Leyton Czarnecki’s 31-yard field goal.

The Lancer defense then shut down the Apache offense for the rest of the half, holding them to two punts and a takeover on downs for no first-half points and just 53 total yards from scrimmage.

“Our defense has been playing well,” said Hostrawser. “We knew we had to stop their running game – the first half we showed our ability to do just that.

“Holding Wabash scoreless in the first half was big,” continued Hostrawser.  “Stopping them the first drive as well as right before half allowed us to keep momentum going into halftime.”

LaVille’s offense took its two second-quarter possessions, minus Doyle’s kneel down to end the half, and drove the ball right at the Wabash defense.

Kolby Watts ended a 10-play drive with a two-yard TD run and Doyle turned what could have been a sack into a 31-yard jaunt to give the Lakeville hosts a 16-0 halftime lead.

The Lancer offense then took the opening possession of the second half right at the Wabash defense again.  Wabash tried to copy LaVille’s on-side kick to start the game with their version to start the third quarter, but LaVille pounced on the ball and took over at midfield.

After a couple of short runs by Kolby Watts, Andrew Dill ran under Doyle’s 45-yard TD pass to give LHS a 23-0 lead.

Wabash wouldn’t give in.

The Apaches took its opening possession of the third stanza and 13-play scoring drive of its own.  Kelsheimer found his way into the end zone from a yard out as the WHS offense converted a fourth-and-goal to get on the board to close the third quarter with LaVille on top 23-7.

Though the fourth quarter ended up being more of an offensive showcase, it was the LaVille defense that set the tone early in the game and more than enough offensive explosion to get the victory.

LaVille used big plays by Dill and Watts to keep at least two scores ahead of Wabash until the final horn. In fact, the Lancers scored on five plays over 25 yards.

“We were able to have several big plays this week.  Behind the blocking of our offensive line, our skilled guys had a big night.  We have a tremendous amount of potential on offense – and our kids really worked hard this week to put it all together.  When they click – it’s fun to watch.

Dill packed bags on a 35-yard TD run, while Watts hit pay dirt from 67 and 29 yards to keep things fresh.

Watts finished the game with 178 yards rushing on 21 carries and three TDs to lead LaVille’s 440 yards of offense.

“Kolby stepped up once again – a senior making plays,” said Hostrawser.  “I thought he did a great job running between the tackles.  The OL played good too.  We made a few adjustments at half time – and once those guys got going, they played really well.”

Wabash did manage a couple of scores to stick around, but it was too much LaVille as the Apaches were eliminated from the Class 2A state tournament.

“Wabash is one of the best passing teams (if not the best) we have faced all season,” explained Hostrawser.  “They ran empty sets with 5 WR and we don’t see that across the season and they took advantage of that.  We did not get consistent pressure on their QB and they made plays as a result.  We ended up making a few adjustments to offset their passing game – and it slowed them down a little.  I give them credit for fighting hard until the end.”

LaVIlle improves to 8-2 overall and will play host to Bremen in the Sectional #34 semi final Friday, November 1.”Week one was a long time ago and we are both totally different now,” said Hostrawser of the coming rematch.  “They are much better as they have really improved in all three phases.  I look for this to be a real good typical Bremen vs. LaVille game.”