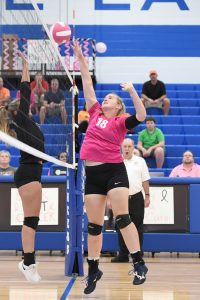 LAKEVILLE, IN. – After nominations from fall head coaches, and an open vote on www.lavilleathletics.com, volleyball player Haley Ross and cross country runner Caleb Christy have been selected September Athlete of the Month.

“The volleyball season this year went great, we worked as one team and bonded with one another, and everyone improved upon their skills,” said Ross.  “This year we beat our record from last year in the number of games won. I am sad to leave next year because I see the potential of us having improved are record even more. This season I have had tremendous personal improvement compared to previous years, my blocks and hits have skyrocketed compared to last years season. Our new coach brings a bright attitude and supports us on and off the court whether it be school or sports related.”

Ross enjoys the opportunity to play volleyball and be one of the taller players at the net.

“My volleyball career overall has been fantastic, I love being the big middle blocker who gets to be the one to get up and block the hitters on the opposing team,” explained Ross.  “My coaches these past couple years have helped me a lot. Last year Ben and Shauna Fagan helped me out on how to get up on a ball and snap it down, while this year Coach Pat and Addison have helped me focus on my blocking and how to be super aggressive at the net. These four people have definitely shaped me into the player I am today.”

Ross has also appreciated the chance to be a student-athlete and participate in education-based athletics.

“Participating in athletics has meant the world to me, I feel like I have a huge family on the court that helps me and supports me to do my best,” concluded Ross.  “By participating in athletics it makes me proud to be a lancer and know that I represent a part of LaVille.  By Coach Pat nominating me it gives me reassurance that what I have been doing this season is working and to keep it up.  By receiving athlete of the month it shows how my team has worked together to help me and push me to do the best I possibly can.” 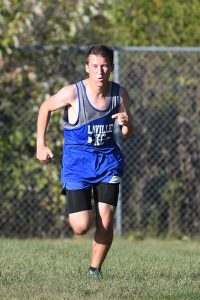 “I feel that this was a strong season for my senior year,” said Christy, a 4-year cross country letter winner.  “The varsity boys cross country team had a great season this year with a full team of players and a lot of improvement throughout the whole team. It feels great to be considered such an important part of the team by this nomination.  It is awesome that the coach and so many family and friends voted for me to receive this special honor.”

Christy started his participation with the LaVille Cross County program when he was a sixth grader.

“I have had a lot of fun times during my years in cross country as well as several different teammates and coaches throughout my years on the team,” explained Christy, who has run for seven years with LaVille Cross Country.  “All three of the coaches I had during my time on the team each gave a lot of advice and experience for this sport.

“Athletics have allowed me to stay interactive with school and with the other teammates,” concluded Christy.  “It has been a great way to have fun while staying active.  For the other students, I would recommend joining any of the sports, such as cross country, to have a good experience during high school.  A few of the new teammates this season told me that it was surprisingly fun to participate in this sport and they wished they could have joined earlier.”

Christy ran his best time of the season, a 21-minute, 30-second, 5K at the Hoosier North Athletic Conference Championships.  The meet was held in Winamac at the Town Park.