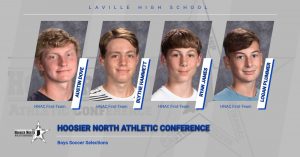 LAKEVILLE, IN. – The Hoosier North Athletic Conference has announced the 2019 Boys All-Conference members.

Caston won the regular season with a 3-0 record.  The Lancers finished at 2-1, Winamac was third at 1-2, and Culver Community fourth with a 0-3 mark.

Below please find the complet list of first team members, along with honorable mention.