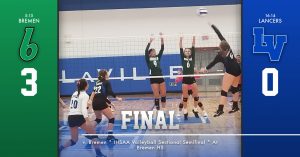 BREMEN, IN. – The volleyball dropped a 3-0 decision to Bremen in the semifinal round of the IHSAA Class 2A Bremen Sectional.
Final set scores were 25-20, 25-23, and 25-19, as LaVille closed the season with a 16-14 overall record.
“One of the hardest obstacles we faced going into our sectional match with Bremen was not playing a match for 11 days!” said LaVille Head Volleyball coach Pat Whiteman-Gring. “When your season is three and four matches a week, having that length of time between games makes it incredibly hard to keep the momentum and enthusiasm at the level needed to steamroll into sectionals. I think this created a bit of a timing issue on the court and caught us out of system more times than not against Bremen.”
LaVille was on the receiving end of a first round bye according to the IHSAA blind draw system.  The final regular season match was a 3-0 victory against Oregon-Davis on October 7.
“Additionally, two days prior to the match, we lost Haley Ross to a knee injury,” explained Whiteman-Gring. “As a coach, you just never want to lose a starting 6’1″ middle right before sectionals. Not to mention the height factor, it’s hard to change the consistency of the starting line-up right before a big game. These obstacles aside, credit definitely should be given to Bremen for playing a sound match with great floor coverage.”
Though LaVille started the season multiple matches below .500, the Lancers battled through the midway point and the final regular season matches.  Over the final 14 matches of the regular season, the Lancers gained not only confidence, but momentum heading into the state tournament. LaVille started a six-match winning streak with a 3-2 victory against Bremen.  During that six-match stretch, the Lancers won the Caston Invitational during a marathon tournament where they played three matches inside of two-and-a-half hours.  The Lancers also won eight of their last 10 matches and 11 of 14.
“As the season comes to a close, I can’t say enough good things about the team – their coach-ability is incredible!” said Whiteman-Gring. “Each and every girl stepped up to make this a successful season. The leadership of our seniors, Haley, Kalista, Karly, Kate, Mia, and Natalie was outstanding! They worked hard at keeping the girls motivated and were quick to mentor the younger players with the knowledge of their earlier years. The senior ladies have given us a firm foundation on which to build next season.

“Our setters, Syd and Alaina have the hustle factor nailed down and are super fast to keep the game moving with a high energy,” continued Whiteman-Gring.  “Our outside attackers, Allison and Reba, have consistently improved their attacking game to bring us those big points. Our middles, Haley and Olivia are truly intimidating to our opponents and give us that wow factor when dominating at the net. And our back row players, Becka, Natalie and Zoey are the guts of the whole operation. Their offensive and defensive passes are what starts nearly every play and keeps us vying for the point. We also had four swing players, Abby, Jaidyn, Madelyn and Olivia who played when needed and never disappointed us when stepping into a varsity game.  These girls make me proud to be their coach, proud to be a Lancer and so excited for next year!