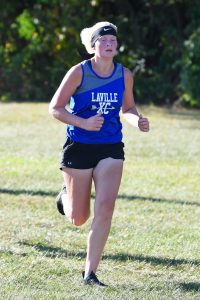 LAKEVILLE, IN. – Injuries and illnesses can come at unfortunate times during an athlete’s career.

Such was the case for LaVille Cross Country runner Faith Rock.

Rock, who qualified for the IHSAA Elkhart Central Regional was to be the first LaVille Girls Cross Country runner to participate at the regional level since Elaine Schmeltz advanced in the fall of 2010.

Rock became ill early last week, but with fall break, still had a chance to rest and recover for Saturday’s run.

“We tried to run a couple of miles on Friday and it became very evident in less than one mile, that in her current condition she would not be able to safely compete on Saturday,” explained LaVille Head Cross Country coach Erin Ecker.  “Faith was very upset with a mix of disappointment and still being under the weather.  She had concerns about the possibility of this being her peak season, but I assured her that I didn’t believe this was the case.

“It is only her second season as a mid-distance runner and I have every reason to believe that she will make it back in next year, possibly with a teammate alongside her,” continued Ecker.  “It was disappointing, but her health and well being was the top priority, we have two more years.”