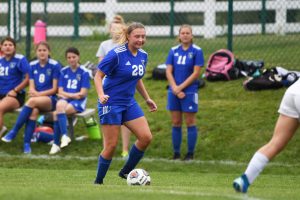 ARGOS, IN. – Two familiar foes square off to open the Indiana High School Athletic Association Class 1A Sectional #35 Girls Soccer Tournament.  LaVille will face Culver Community for the second time this season in the opening round match scheduled for a 5:15 p.m. start at Argos High School.

The two squads met on September 25, with the Lancers picking up a 5-1 victory on a hot late-September day at Culver Community High School. 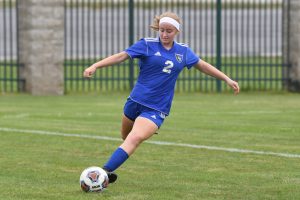 “Keys tonight are defending as a team,” said LaVille coach Daniel Pleninger.  “Closing down the middle and shutting down Culver’s center-forward #4 (Kaylee Hamilton) will also be key for us.”

Hamilton, along with Baleigh Binkley and Kenzie Binkley has all scored in double-figures so far this season. The Culver trio has scored 56% of the Cavalier goals.

“Everyone is playing well,” said Pleninger of his Lancer squad.  “Kylie Gorka, Kassi Watts, and Lauren Tompkins have all really stepped up in midfield and defense.” 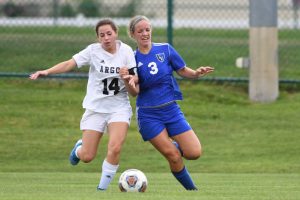 Pleninger would like for his squad to for the action early and get on the scoreboard.

“We want to start aggressive and play a 4-3-3,” said Pleninger.  “We want to attack the corners, get some crosses in and get some chances.  I really look for this game to be more up-tempo. I don’t see a defensive battle.”

LaVille comes in 4-9-1, with two losses by one goal and two losses by two goals.  The Lancers have also have faced four state-ranked opponents – Class 2A #6 Marian, Class 2A #7 Culver Academy, Class 2A #19 Plymouth, and the Class 1A #5 host Dragons.

Among its eight victories, Culver Community is 7-0-1 when scoring at least four goals.