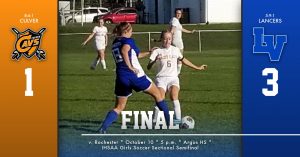 ARGOS, IN. – Survive and advance . . . that is what it is all about when the state tournament rolls around.

The LaVille girl’s soccer team did just that in escaping Culver Community, 3-1, to advance to advance to the semifinal round of the Class 1A Sectional #35 tournament Thursday.

“Playing a complete 80-minute game is really the difference,” said LaVille coach Daniel Pleninger.  “Especially in these sectional play-off games. The team that can keep their heads the entre 80 minutes is typically the team that ends up on top.”

The two Hoosier North Athletic conference squads met back in late September, with the Lancers winning 5-1 on a hot day in Culver.

On this night, the two battled to a 1-1 stalemate through the first 40 minutes. 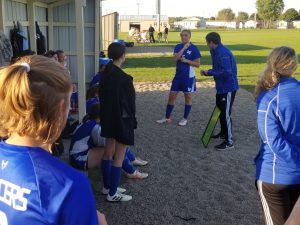 LaVille’s Abbi Creager got the Lancers on top after she reared back a lifted a shot at the 28:05 mark. Creager’s shot from near the 18,deflected off a Culver defender and past Culver goalie Sophia Heath.

Culver’s leading scorer, Baleigh Binkley, tied the score when she took the ball up the left side, veered near the middle of the field at the 18 and cleared the diving attempt of LaVille goal Trynitie Cox to tie the score at 1-1 with 17:48 before the break.

Both teams battling to gain momentum until LaVille’s Kylie Gorka set up for a free kid right of center.  Gorka saw a slight opening in the Culver defense and instead of trying to lift the ball over the Cavalier defense, kept the ball low and it squirted through to give LHS a 2-1 lead and much-needed boost.

“That goal was a morale and confidence boost,” Pleninger said of Gorka’s smart play.  “We were able to keep that mindset to finish out that half. It was crucial. After that goal you could see Culver’s confidence to go down.

“Things were slipping away for them,” continued Pleninger.  “It gave us the momentum, the motivation to finish out the game and keep working.” 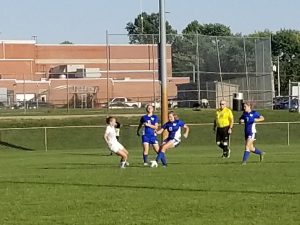 Pleninger’s crew finally put the game away as Lauren dove found Creager in the middle of the box.  Creager settled the ball long enough to take a shot and found the net with 6:39 remaining to seal the victory.

“Our defense had was shaky at the start, but rebounded really well,” explained Pleninger.  “They kept their heads in it.  (Emily) Talaga played great in the middle kept things together. Platz gave us good experience back there and helped keep things together, as well. Everyone else just fought hard back there and did a good job of winning the ball and giving everyone else a chance at it.”

LaVille’s Kassi Watts held a chance to give LaVille the lead heading into halftime.  Watts dribbled, weaved between a pair of Culver defenders and shot, only to have the ball curve just to the right of the goal as time ran out just before half.

LaVille improved to 5-9-1 overall and will face Rochester, a 4-0 winner over North Miami in Tuesday’s opposite bracket.

The LaVille-Rochester semifinal match is set for 5 p.m. Thursday at Argos High School.  The second semifinal will feature Argos and Bremen immediately following.  Thursday’s winners will advance to Saturday’s championship.