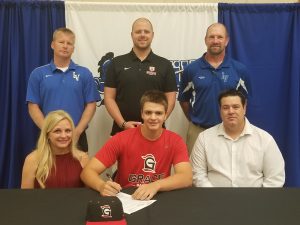 “I chose Grace College because of the Christian environment and the opportunity to play the sport I love,” said Herbster.  “I want to bring honor and glory to God through my actions.”

Herbster hit .279 with three doubles and 18 RBI as a freshman.  Herbster, who pitches, plays first and third, was an All-Hoosier North Athletic Conference selection as a sophomore and junior.  As a sophomore, he hit .427 with three doubles and 25 RBI.  Last season during the LaVille Sectional championship run, Herbster was 7-1 overall on the mound, with a 0.70 earned run average.  He also hit .429 with 13 doubles and a team-leading 31 RBI. 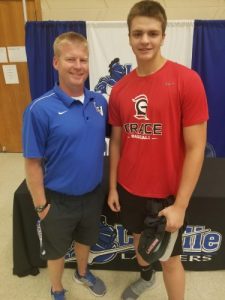 Herbster’s 3-year career statistics include a .383 batting average, 29 doubles, three home runs, and 74 RBIs.  He has pitched 55.1 innings, allowing five runs, walking 16 and striking out 51.  He also has two shutouts and one save.

“Isaiah Herbster has been a starter since his freshman year and has played first, third, and pitched for us,” said Lawler.  “He is an extremely hard worker, coachable, and a great teammates.  It’s been a pleasure coaching Isaiah, and I look forward to seeing what he can do his senior year and what he will do at Grace College.”

The Lancers finished 22-6 and the 2019 Hoosier North Athletic Conference Championship with a 14-0 record.  LHS was also 9-0 in games played at Lancer Field and outscored the opposition 272-71. 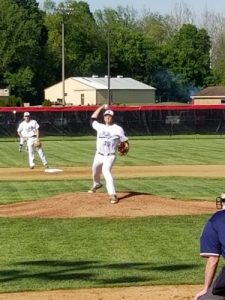 Isaiah is the son of Dave and Shawn Herbster.  Isaiah has two older siblings that have a degree from Grace College.  Older brother Quentin graduated from GC before going to the Czech Republic to contiue his baseball career.  Older sister Hannah, player collegiate softball for Grace where she was an all-american before graduating as Grace’s all-time stolen base leader. Hannah is now an assistant coach for the Grace College softball team

Former Crossroads League Commissioner J.D. Collins initiated a re-brand effort to update and revive the identity of the Central Indiana based athletic conference. In the Fall of 2011 Collins began the re-brand process by performing a thorough primary research study to replace the current brand. The re-brand process included institution presidents, athletic directors, coaches and sports information directors. Along with the institution leaders, Collins worked closely with a college athletic consultant, 2D Consulting. The conference then hired Intersection, a branding agency, to take the lead on re-creating the name and visual identity of the conference. These partnerships took shape in early 2012.

The purpose of the re-brand effort was to fully discover the heart of our league. The committee scoured the country for conference naming concepts, identifying strong performers and trends to find inspiration for a rename. The creative brief of the re-brand process inspired designers to visually represent the characteristics of our league. Some of those include: athletic, bold, speak to prospective student-athletes, and embody the core values of our institutions.

After a thorough re-brand process Intersection presented the new brand in late April 2012. Collins’ strong satisfaction with the new brand was echoed unanimously by all ten institution Presidents.

As of July 1, 2012 the Mid-Central Conference became known as the “Crossroads League”.

The “Crossroads League” name is made up of several key attributes. First, the name has a subtle faith-based application by using the word “cross”. Secondly, it has a regional play in that Indiana and the Midwest are the Crossroads of America. Next, using the word “league” sets us apart in that there are no other “leagues” in the NAIA. Lastly, the name is short, tangible and highly memorable.