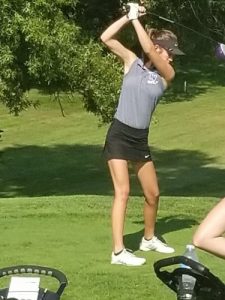 LAKEVILLE, IN. – She really wanted a little more.

She fell just a few strokes shy of her ultimate goal, however, her experience during the HNAC Golf Championships earned an honorable mention status.

That experience ultimately led to career-best round just a few days later and match medalist honors.

It also helped her realize a season-long goal.

The HNAC Championships were held at Chesapeake Run in North Judson on September 14.  She used a strong putting game to go with some other key shots on around course to finish with a 112 and 10th place overall.

“When I played at Chesapeake Run for the HNAC, I felt like I was doing pretty well,” said Garrett.  “I shot a 112 for the 18 holes, which was pretty good being that I shot a 56 on each 9. I felt like I was putting really well that day and was having pretty straight and long drives. I have always been pretty close to getting honorable mention, but I knew I probably wasn’t going to shoot low enough to get a medal or anything. It felt relieving to get honorable mention because I felt like the past few years really paid off.” 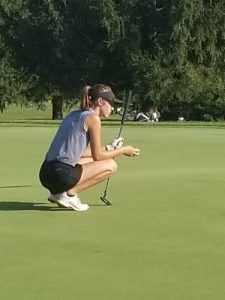 That experience of playing Chesapeake Run Golf Course just a few days prior really paid off a few days later.

You could say that Garrett felt more comfortable.  Had a lay of the land.  And she took every advantage in the final regular-season match of her career.

“I shot a 46 at Chesapeake Run on the Tuesday after conference, which was my lowest ever,” explained Garrett.  “I felt more comfortable there being that I had just played there a couple days before, which I think helped the way I played. I was very happy to finally reach the 40’s, which was my goal at the beginning of the season. I got my drives to be really good and was having pretty good putts and fairway shots.

“I had a good mental attitude that day also which was helping the way I was playing,” continued the LaVille senior.  “It was really rewarding to finally realize that all of my practice the past couple of years has paid off and my mom was really proud of me. I will miss playing golf as a school sport, but will definitely continue to play it throughout the rest of my life.

Garrett was the individual meet medalist in the match against Knox and West Central. 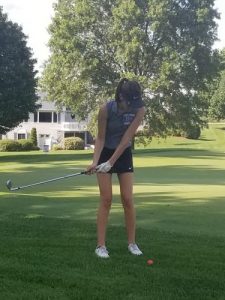