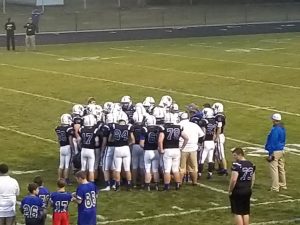 LAKEVILLE, IN. – It was a game that ultimately was won by the team that executed the best and had the least amount of turnovers.

Class 2A #8 Pioneer was able to execute at a higher rate both offensively and defensively to pick up a hard-earned 36-14 victory over Class 2A #7 LaVille at Lancer Field.

“While Pioneer is a good team, I felt we played more physical than they did – we hit harder,” explained LaVille Head Football coach Will Hostrawser.  “I also felt we were in better shape.  We just did not execute our scheme when it counted.  I also think we lost the special teams battle as well.  We will be working on those issues and be better in the weeks to come – that’s what its all about – getting better each week – we want to be playing our best football come week 10 – the start of the state tournament. Our team would love the opportunity to meet Pioneer again come tournament time . . .”

Pioneer, who took a 22-7 halftime lead, found themselves up just one score as LaVille took the opening possession of the second half down the field for a score. 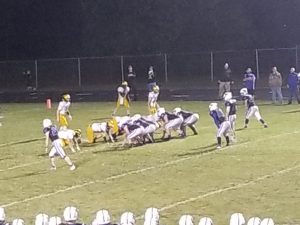 The Lancers changed the game plan from a run oriented offense to a passing game to go 44 yards in seven plays.  Ayden Doyle found Andrew Dill in the end zone for a four-yard TD pass.  Leyton Czarnecki came on for the point after and the hosts trailed just 22-14.

A one score game.

“Being able to move the ball in the second half was a direct result of being able to play physical football,” said Hostrawser.  ” Against a team like Pioneer your running game needs to focus on getting the 3-4 yard runs consistently.  We adjusted our running style to less “dancing” to planting the foot in the ground and going north and south with a goal of 3 yards – then pushing for 5-6 yards.  Our OL played relatively well the second half – they were certainly more physical.
It was at that point that Pioneer proved why it has now won 32 straight Hoosier North Athletic Conference games. 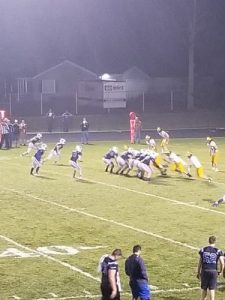 Following the LaVille TD, the Lancers had Pioneer in a fourth down situation and Miles Von Tobel in to punt from the Panther 40-yard line.  The snap barely left the ground, hopped to Von Tobel.  The Pioneer punter muffed the ball, turned around to pick up the ball and what looked like a sure loss as the pocket around Von Tobel was closing in with LaVille defenders, Von Tobel found a way out.

The 5-foot-10 senior wiggled his way free, broke a couple of tackles and raced 60 yards for a game-changing touchdown.

In what looked like LaVille would get a tackle for loss and great field position trailing by just one score, turned into out to be just one of the plays that helped Pioneer improve to 2-1 overall on the season.  The 2-point run attempt was failed, but the Royal Center visitors lead jumped to 28-14.

On the ensuing drive, LaVille once again moved the football down field.  Doyle found Kolby Watts for 27 yards and put the hosts in Panther territory.

Another completion, this time Doyle to Evan Bettcher gave LaVille a first down at the PHS 13.  Following an incomplete pass, Doyle completed a 3-yard pass to Dill.

On the next play, Pioneer stepped in front of Doyle’s pass and the Lancers turned the ball over inside the red zone.

Pioneer then took the ball nine plays, 93 yards to pay dirt. A stead diet of Ezra Lewellen, Addai Lewellen, sprinkled with some runs by Von Tobel and the Panthers had the ball second-and-11 from the LaVille 36. 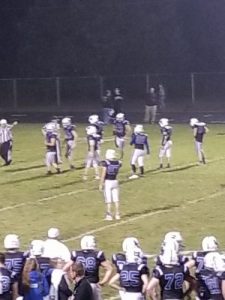 LaVille stayed with the passing attack over the final two possessions of the game, but lost the ball on downs twice inside the Pioneer 10-yard line.

“We didn’t execute consistently in the red zone – that’s the bottom line,” said Hostrawser.   “Plays were there – but we just didn’t finish because some guys just didn’t execute their responsibilities.  We will certainly work on that moving forward.”

Following the second turnover on downs, Pioneer was able to run the final two-and-a-half minutes off the clock to secure the victory.

Both teams opened the game forcing the other to punt, but it was LaVIlle that drew first blood.

After getting fine field position at the LaVille 46, Ayden Doyle directed an eight-play, 54-yard drive ending in a 35 yard TD pass to Andrew Dill.  Czarnecki came in to add the PAT.

“Our kids came out ready to play – we wanted to make this a physical ball game,” said Hostrawser.  “Scoring first was a nice shot in the arm for us.  The pass play we scored on actually has been in the playbook against Pioneer in the past and we just didn’t execute it.  This year, we did.”

On the ensuing kick-off, however, Addai Lewellen picked the ball up at the five, found the wall, cut back against the grain and outraced all defenders for a 95-yard kick-off return for a TD.

“Following our score – we got a little too comfortable too quick – our kick-off team didn’t run their lanes properly – something we practice numerous times each week,” said Hostrawser.  “With the speed of the Lewellen twins you can not afford those kinds of mistakes – and we got burnt.  It seemed like that play did snap momentum away from us.”

Pioneer (2-1) will travel to Caston, while LaVille (2-1) ends a 3-game home stand by hosting Winamac at Lancer Field.  Both games are scheduled for Friday, September 13.