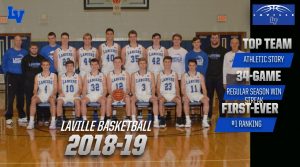 LAKEVILLE, IN. – After an open vote on www.lavilleathletics.com, the LaVille Basketball team has been selected the Top Team Athletic Story of the 2018-2019 School Year.

Lancer basketball won the Hoosier North Athletic Conference, finished with a school-record 34-game regular season winning streak and the made history when they climbed to No. 1 in the Class 2A Associated Press Poll.  It was the schools first-ever #1 ranking in any sport.

Basketball received 54% of the vote.  Baseball, which won the first IHSAA sectional title since 1991 and earned HNAC title honors, came in second with 37%.  Boys Track, after winning the Hoosier North Athletic Conference title and Dennis Rippy Invitational, was third with 7%.  Finishing fourth in the voting was the 2018 HNAC Champion boys soccer team.

“In the last two years I have been very blessed to have had the opportunity to coach some wonderful young men,” said LaVille Basketball coach Michael Edison.  “These basketball players have worked extremely hard both on and off the court.  I have been very impressed with their focus in the classroom and the way they have been excellent role models to younger students.  Being voted as the top story for the 2018–19 school year is a testament to the sacrifice, dedication, and hard work each one of these guys has put into a very long season.  Five amazing seniors graduated from this year’s squad and they will all be greatly missed.”

When asked about the first-ever #1 ranking in any sport, Edison responded: “Even though our number one ranking was short-lived, it was a nice honor for the players as they worked extremely hard all year long.  Much of that number one ranking goes to the success of the previous year’s squad as well. Dakota Figg, Jacob Good, Dalton Dove, and our two managers, Jake Anders and Isaac Hall, all really helped to catapult us into this season.  We will greatly miss the strong leadership of Luke Beehler, Rilye Cox, Riley Wagoner, Jared Beehler, and Nathan Nichols-Petersen from this year’s squad.”

The Lancers began the 2018-19 season as the Class 2A #5-ranked team and won their first eight straight games before a 72-59 loss to then No. 12 Indianapolis Howe in the Indianapolis Park Tudor Tournament.  That loss dropped LaVille from #1 to #3 in the AP state rankings at the time.

“The No. 1 ranking was a credit to the hard work and commitment of our guys and what they have done the past two years,” said Edison.  “It was well deserving. This team is a tight-knit group that is unselfish, smart and hard working. I enjoy how good a people these guys are off the court.

“You have to be ready every single night regardless of a ranking,” explained Edison.  “You just have to be the best team on the court that night.  I would rather us learn from a win than a loss, but you can always learn from either one. We competed against Howe and they were the real deal.  We just need to be as tough as we can be, both mentally and physically.

“This group of seniors has been an amazing group of guys!” said Edison.  “They will be un-replaceable.  My best hope is that these younger guys have been watching and learning from them for the last few years and will begin to model what the seniors have done.

“Luke Beehler has started every single game for me for the last four years,” continued Edison.  “Rilye Cox has been an integral part of the varsity for four years.  Jared Beehler transferred here as a sophomore and has been the best pure shooter I have ever coached.  Riley Wagoner has been the most amazing teammate as he has been willing to do all the dirty work that does not get a lot credit.  He has displayed an amazing attitude every single day since I have known him.  Nathan Nichols-Petersen played two years for me and then this year he decided to be a manager and displayed an unbelievable amount of servant leadership.  He was as much a part of the success of the team as the players themselves.  They will all be truly missed!”

“I was so impressed with all seven of the younger guys and how they improved throughout the year!” said Edison.  “I am really excited to see this group of guys next year as I have great expectations for them!”

LaVille finished the 2018-19 campaign 19-4 overall and 6-1 and tied for first in the Hoosier North Athletic Conference.

The Lancers finished the season as the Class 2A, #6-ranked team in Indiana.  The LHS defense allowed 46.8 points per game, while scoring 61.0 ppg.