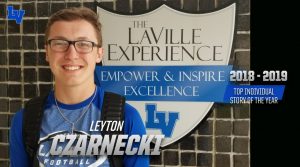 LAKEVILLE, IN. – After an open vote on www.lavilleathletics.com, Leyton Czarnecki has been selected the Top Individual Athletic Story of the 2018-2019 School Year.

Czarnecki, a three-sport athlete, became the first LaVille student-athlete to be selected to serve on the IHSAA Student Advisory Committee.

Czarnecki collected 44% of the vote.  Pole-vaulter Emerson Lemberis was second with 22%, followed by IHSAA Wrestling State Runner-Up Alex Cartwright with 13%.

“I just think this is a great opportunity to step out of my comfort zone and be able to represent LaVille,” said Czarnecki as he officially began his IHSAA Student Advisory Committee duties at the IHSAA Student Leadership Conference. “I also want to know what it take to make the IHSAA better every year.” 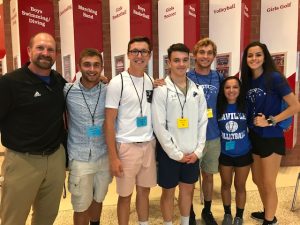 According to Czarnecki, there was a meet and greet for the IHSAA Student Leadership Committee members.

“All the kids on the committee got to meet each other when we were all at the leadership conference that kind of started it,” said Czarnecki as he officially began his IHSAA Student Advisory Committee duties at the IHSAA Student Leadership Conference.  ” In the beginning of August we are going on a retreat to get to know each other more and build relationships. 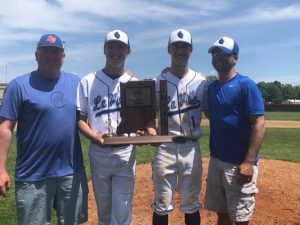 “The leadership conference was really interesting,” continued Czarnecki.  “There were so many different points that caught my attention like becoming a leader that stands out from people, stepping our of your comfort zone, and ways that you can encourage peers around you.  It was awesome being able to meet so many new people and hearing about all the experiences they have had.  I really liked being able to hear about all the great things the kids on the committee had to say about each other and everything they had learned.  Meeting so many new people with the same mindset of me was great!

“The thing that I am looking forward to the most is being able to communicate with my peers and being able to put my advice in to the IHSAA with the rest of the committee to improve the sportsmanship and sports around us.  I want to be able to do as much as I possibly can do as an individual to help the other people that are interested in the IHSAA.

Czarnecki, a member of the football, basketball and baseball teams this past year, also shared some thoughts his sophomore year being involved with LaVille Athletics.

“It was a great experience to be part of and an opportunity that not everyone gets to be a part of,” said Czarnecki, referring to the basketball 34-game regular season winning streak.  “The feeling of the season was unbelievable.  The bond between all of my teammates and I was extraordinary and there was always a fight in us.  We never gave up until any game was over.

“Our baseball season was nothing but special,” continued Czarnecki, referring to the first baseball sectional title since 1991.  “The boys that I was surrounded by were great, and there were always laughs on the field.  Being the first to win a sectional as a sophomore since 1991, which was my dad’s sophomore year, was crazy.

“The excitement that rushed through our team as the game came to an end with the last out was crazy!” continued Czarnecki.  “I will never forget the moment that we won.  We fell short in the regionals but that just gave us more determination for next years season.”

Finishing out the Top Individual Athletic Player Of 2018-19 voting was softball player Allison Medors, who earned second-team all-state, and basketball player Luke Beehler, who became LaVille’s sixth player to surpass 1,o00 career points, tied for fourth with 6%.  Basketball player Jared Beehler, who hit a school-record 10 3-pointers in a game, had 4%.  Riley Wagoner, male athlete of the year and Class 1A football all state, finished with 3%.  Trynitie Cox, who hauled down a school-record 20 rebounds against Jimtown, and the female athlete of the year co-winners Charlet Kapke and Shelfie Zeiger finished with 1% each.