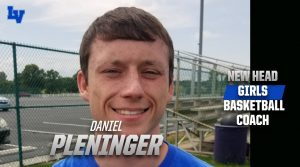 LAKEVILLE, IN. – Following approval at a recent Union-North United School Board meeting, Daniel Pleninger has been named the new head girls basketball coach at LaVille High School.  Pleninger replaces Corey Duncan, who compiled a 42-51 record in four years at LHS.

Pleninger becomes the fifth coach since 1990 and takes over a team that finished the 2018-19 season with a record of 5-18 overall and 1-6 in the Hoosier North Athletic Conference.

When asked about his basketball philosophy, Pleninger said: “I am not a coach who focuses on a lot of set plays. I think the girls already have good basketball instincts and I want them to have the freedom to create and be basketball players. I don’t want my players focused on being in the correct spot and forget how to play the game. Offensively we will try to run a Read and React system and look to push the ball quickly in transition. Defensively we will be mostly man-to-man and we will look to extend that to full court to help create those quick chances in transitions. Yes there will be situations where you will need a set play but most of the time we will look to push the tempo.”

“I love coaching,” said Pleninger.  “I feel like I’m at my best when I am helping our students. I love basketball. Yes, I also love soccer and soccer is a sport I am naturally better at playing, but I am Hoosier and I follow all levels of basketball. Also, I already have relationships built with the players who play both soccer and basketball.

“My only expectation is that we improve every game and look to better ourselves and our teammates in practice,” continued Pleninger of his basketball expectations.  “Every game will be a team effort, we do not have anyone who can win the game on their own. But when this team trusts each other, I think they will surprise a lot of people.”

Soccer and Basketball season run back to back in Indiana, so Pleninger will be a busy man.

“It is going to take a lot of organization and planning to effective practices and effective lessons as a teacher,” explained Pleninger.  “I am going to have to change my lifestyle so that I have time to do everything I need, but this is something that my wife supports me with and her encouragement is priceless.”

Returning contributors from a year ago include seniors Trynitie Cox and Natalie Gonzalez.

LaVille will also look for a point guard with the graduation of Kelsey Aschenbrenner.

“I played throughout middle school and high school, but didn’t play in college,” said Pleninger, who has never coached basketball before this job.  “I was always a role player but I am a Hoosier so basketball is in my blood.

“One reason why I took the job is because I see a lot of potential with the players on this team,” said Pleninger of the returning basketball talent.  “Now I haven’t seen everyone together at the same time because of the summer but what I have seen is promising. Everyone works hard on offense and defense and everyone has been willing to try new things. They are willing to do the little things that will help us improve this year. Once this team gets everyone to fight for each other, they will surprise a lot of people.”