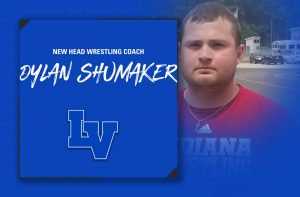 LAKEVILLE, IN. – Following approval at a recent Union-North United School Board meeting, Dylan Shumaker has been named as the new head wrestling coach at LaVille.  Shumaker replaces Sean Webbb.

Shumaker is a 2019 graduate of the University of Indianapolis, where he majored in psychology.  Shumaker currently works at Bowen Center in Plymouth.

According to Shumaker, he was a 4-year letter winner at Bremen High School.

When asked about his coaching philosophy, Shumaker responded:  “I expect hard work. I like to push the kids. You’ve got to be good students to be good athletes. Being a good student shows you can learn.”

According to Shumaker, he has wrestled since he was five years old and has, “helped coach at Bremen and John Glenn.  I have also officiated for three years.  I have knowledge to succeed in wrestling.”

When asked about his interest in the LaVille Wrestling position, Shumaker explained: “It is close to home. I have a family friend that heard the job was open.  Being at Bremen, I wrestled LaVille in junior high and high school . . . it’s a rivalry.”