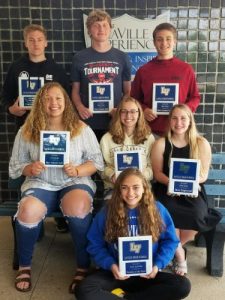 The LaVille Boys track and field team experience success as a team and individually this season.  They also continued consistent improvement with each day and head coach Kathe Beehler was pleased with the season.

“We also won the Dennis Rippy Invitational, finished second at Concord Kelly Relays, and were the Hoosier North Athletic Conference champions. It was great to have a home track to practice on and have meets again.”

The LaVille girls track and field team competed very well inspite of having a smaller group.

“I’m very pleased with the 2019 Girls’ Track Season,” said LaVille girls track coach Erin Ecker.  “We had two half point losses, one to Winamac for the conference title and another to Mishawaka Marian to place seventh at sectionals.  These were disappointing for sure, but when we look at the big picture we did it with a very young team. We get a chance to do it all again next year.

“We were small but mighty, with only 18 girls,” continued Ecker.  “But they showed up and performed day in and day out which lead to the success we enjoyed.  We were definitely stout in the sprinters and we were able to plug in the gaps with some very versatile athletes. I had the freshman class last year in junior high and I knew those girls were going to be good in high school, I was surprised for it to be so soon! We had five places at a very tough Penn sectional, some in multiple events. We have a handful of upperclassmen but they were phenomenal at setting the tone for success. Julia (Hall) was one of our top scorers for field events and Kalista (Lemberis)  and Natalie (Gonzalez) led the sprinters. Emerson (Lemberis) led with her fearless determination concurring pole vault and setting a new school record in an event that was new to us this year. We will definitely miss our senior playmakers (Julia & Emerson), but next spring we hit the track with a year of experience under our belts and an infusion of yet another talented freshman class.”